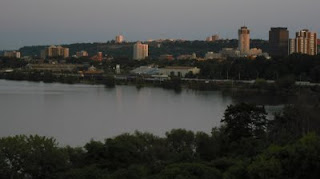 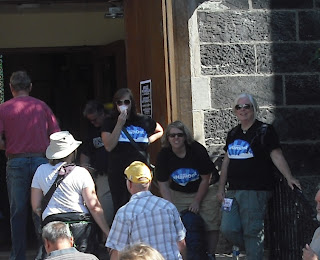 Blogging was supposed to be spouting off my theories and odd tastes on a world stage. The truth is no matter how rich and powerful we are (which I am not) we all live in a very particular location where we are rooted.

I feel fortunate to live in Hamilton, Ontario. I didn't grow up here and I certainly didn't crave to live here. As a youngster I grew up in Oshawa and one of my interests was the CFL, but I never rooted for the Ti-Cats. Later I moved to a touristy cottage area, Haliburton for my last two years of high school. As a hitch-hiker I was given a ride by a Hamiltonian who was very glad to visit "God's country" as he described my home turf and denigrated Hamilton. Looking back I think he was merely describing the inside of a steel plant. but certainly did not make Hamilton appealing.

My dad was a truck driver who liked to drag his kids on some of his trips. One I remembered was to Hamilton. As we approached Hamilton we went over the Skyway Bridge which was scary for me as I hate heights and sitting inside a truck just exaggerates the feeling. We went along Burlington street (for those not familiar with the area it feeds into an industrial area) and went to a business only a short distance from the exit and dumped his load and then turned around. That was my introduction to Hamilton and I had no desire to repeat a visit.

After school I needed to find a job. For me it was arduous, but back in those days I typed up hundreds of letters seeking employment all over Ontario. Hamilton was always last on my list and I felt fortunate some other prospects responded first. I eventually was offered a job by a Toronto company, but they had a more urgent need in Hamilton and since I had no real connections in Toronto suggested it was a better opportunity. With a married sister living in nearby Burlington I accepted.

Eventually I was fortunate to to meet a local girl, did go through a series of job changes and house moves and settled in Hamilton. At one point I did commute to Toronto and I remember some people expressing pity when I explained I lived in Hamilton.

As time went on I had two children and through them developed many ties to the community because of their interests in sports and music. They both did something strange in choosing university. One chose Halifax and later the other chose Victoria (a story for another blog). My wife and I spent a lot of vacations on one coast or the other and got to see a big and enjoyable hunk of Canada from our Hamilton base.

Heather returned to Hamilton after her stay in Halifax. Lately she found herself getting more involved with Hamilton in a bigger and bigger way. Technologically way ahead of her parents she put a lot of energy and creativity into boosting Hamilton. She founded #TeamHamont with the help of many friends. This past weekend her efforts tied into a big event Supercrawl. I am sure there will be greater things to come and more people will be aware there is more to Hamilton than they used to think.

Just before the weekend I attended my first tweet-up organized by Heather. I knew something of the people through Twitter, but it really was a pleasant surprise to put faces (and voices) to names. I really have only had a few conversations, but it illustrates social media in a way I had not thought of before. My twitter contacts are real and unique, but also we are all tied together in a few ways.

What do I like about Hamilton? Cootes Paradise and Bayfront Park (within walking distance). I have come to appreciate this is a city of Waterfalls (over 100). Our mountain, may not be a real mountain, but it is my mountain. I love the library and being in a town with McMaster University and Mohawk College. I love they have several theatre groups. I love the education system that helped shape my kids (and me as well). I love the Downtown Farmer's Market. The Art Crawl is a wonderful way to spend a Friday evening. Most of all Hamilton is people who come from all over with a wide experience and a variety of outlooks. There is much more to Hamilton. If you haven't seen it why don't you find an excuse to visit. If you live here I am sure you have your own story to tell which I hope you will tell.

One photo is a view Hamilton Harbour and the other is of a gathering of #TeamHamOnt during the recent Supercrawl.