Kinship is a precious thing too often taken for granted, but not something you want to lose when you think deeply about it.  Funerals are not events you look forward to, but as one of life's passages they bring friends and relatives closer. Cameron Stewart's death notice arrived on my email Nov 16th, just one day after he died.  It was not totally unexpected but saddened me none the less.

My Uncle Cam married my mother's older sister, Ruth some time after my mom and dad married and after Cameron served in WW II.  Every now and then I became aware of them, but Uncle Cam worked for Ontario Hydro and his family spent several years in a remote town near James Bay called Fraserdale that could only be reached by train.  I occasionally saw my aunt and uncle and cousins when they visited Oshawa my home town.  A few years later they moved to Cornwall and we perhaps saw them a bit more often.

Some things I remember about Uncle Cam.  At a family wedding held at my parent's home, we all had a meal and afterwards came an awkward time. Mostly my mother washed the dishes and put them away, but my Uncle was having none of that.  Without saying much he started to help and urged others to get involved.  We felt a bit ashamed of ourselves, but realized it was the proper thing to do and helped open up my attitude a bit.

After I was married and went with my wife's family to a wedding in Watertown, New York I decided it would be good to check up on my own family and drove to Cornwall.  I had been told that my Uncle Cam had given the Queen a tour of the Hydro facility in Cornwall.  We asked for and got our own tour and I remember at one point he said this was as far as the Queen went, but he took us further.  It was quite an impressive facility.

He was always easy to talk to.  My wife is half Italian and he talked about his time in the army in Italy during World War II and afterwards visiting with my aunt.  As I started to get involved with the family tree and read up about the Canadians battles in Italy I asked him if he was in any of the battles.  He answered that no he wasn't in any of those famous battles.  It took at least another two years before he explained that he had been involved in mopping up after those battles--in other words they gathered up the dead soldiers and tidied up the mess left behind after the killings. 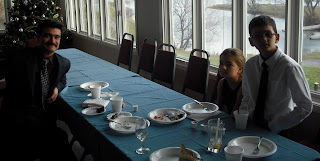 I remember one family gathering, though not all the details.  One person got very upset and started yelling.  In most family gatherings someone might yell back or the group would attempt to ostracize or avoid the offender.  Not Uncle Cam, he took the person aside and walked with them and talked till things calmed down.  I was quietly impressed and wish I could say I followed in his footsteps, but I merely look back on it as quite remarkable.

When my mother was dying and the word got out that she wanted to see her sister, my uncle and aunt were at some trailer camp in eastern Ontario, but dropped what they were doing and rushed to the hospital in Cambridge where my mother lay.  This process stretched over two weeks and my aunt always seemed to be nearby, and also my uncle.  When my mother died (my Aunt Ruth was the only family member in the same room) two or three of us were talking about how my mother held the family together.  Uncle Cam didn't butt in, but when invited in to the conversation made a suggestion that we get together once a year for a picnic.  We didn't know this at the time but the weekend we chose (just before the Labour Day weekend) was their anniversary, but they always showed up.

I remember my aunt and uncle and cousins visiting for weddings, anniversaries, funerals and holiday get togethers never really appreciating how inconvenient it must have been living so far away.  I spent a lot of time at my Grandmother Coakwell's home after my family moved and also when in university and would come across some of my cousins.

In truth this was not a funeral.  Uncle Cam had chosen to be cremated as soon as possible.  He didn't want a big fuss to be made, but his family thought he was well worth remembering and celebrating. His ashes in an urn were the focus, not his body in a casket.  They were brought into the service by Grand-son Robert James and Grand-daughter Jacqueline van Dassen.

After someone dies you not only remember some things about them, but you also find out a few things you didn't know.  He was a Shriner.  What I know of Shriners is they enjoy life and like to do good and I think Uncle Cam would have been a natural fit.  I did know he liked boats and sailing, but was reminded by one of the speakers.  His daughter Brenda and his grandson Andrew reminded me he loved nature and there was one reference to "bird moments" that surprised me. 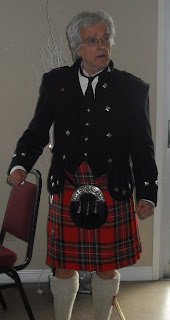 Peter Cotton, a son in law played the bagpipes during the service reminding me that Uncle Cam had a Scottish heritage.  I remember Peter at another  funeral (for Uncle Harold) where at one time the funeral visitors were expected to walk across a busy stretch of King St in Oshawa during rush hour.  He pumped up his bagpipes and marched us across the street where all traffic instantly stopped for our passage.

There was a display of the Stewart tartan on the urn and Jacqueline's head and I realized I should have worn my Davidson tartan tie or even jacket.

At weddings it is common to be asked if you are with the bride or groom and seated accordingly.  It is natural to gravitate towards the familiar and in my case that meant three siblings and my three cousins and their families, but it was pleasant to get to know the "other" side a bit.  Kate Stewart asked to be introduced and she knew me a bit from Facebook (we are now friends) and shared with my sister Rebecca an interest in playing the piano.  Ron Stewart, Uncle Cam's brother (and once involved with the Avro Aero project) remembered my father. 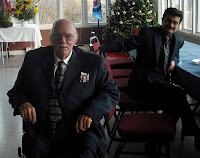 There were a few tears, but probably more laughter as we all thought of the fond memories we had of Uncle Cam.  He would have felt good about bringing us together, but not thinking a funeral was necessary for it to happen.

You can read about my Aunt Ruth at:  http://www.therealjohndavidson.com/2014/11/my-aunt-ruth.html

PHOTOS:  I apologize that my photos aren't as good as they deserved to be, but I regret even more that I didn't take more photos as they would help me to remember better.

The top is of Andrew Elbendari and Robert James with Derek Van Dassen.

The second photo is of Donna Stewart talking to my sister Jennifer and Charles.

The third photo is of the "grand son in law" of Ron Stewart with his two children who came from Alymer, Quebec.

The fourth photo is of Linda Stewart, Rebecca Davidson, Jennifer Davidson (with Jacqueline van Dassen standing behind) and Marshall Davidson.

The fifth photo is of Peter Cotton who I wanted to get a photo of with his bagpipes, but I was too slow and too shy at the wrong time.  I believe he was wearing the Stewart tartan.

The bottom photo is on Ron Stewart with his grand-son in law.