AGE OF GREED by Jeff Madrick 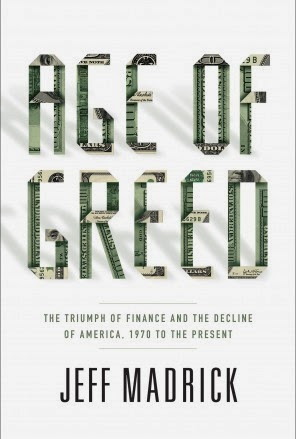 "Age of Greed" reinforces my feelings of corporate conspiracies.  If you are a member of the 99% you must sometimes wonder why you are relatively poor and some others are so rich.  It is easy to  pick up on conspiracies that explain that others have played unfairly.  Really there is more to it than that, but it is sometimes comforting.  Not to relegate" Age of Greed" to weird conspiracy literature, but rather to use it as an example of how our western Capitalism works.

Jeff Madrick brings in history, starting from the 1960s' but with references further back, such as Roosevelt and the hatred of his New Deal.  Although we can become pretty disgusted with the shenanigans of today's political and economical power players, the problem goes back to human nature.

The first steps are bankers wanting to evade regulations.  Banking has always seemed a safe vocation, but not terribly exciting.  When they are able to evade, distort and change the rules banking becomes more exciting and profitable.  Risk taking increases and fraud becomes more common.

Around the 1970's a movement grew where conservative philosophers proclaimed that rich people deserve to be rich.  It was framed a little differently.  The marketplace was the tool of rationality and central government planning was disparaged.  The truth as others see it is that powerful people resent restrictions on their freedom.  They are attracted to philosophies and stories that justify their view of the world.

William Buckley,Jr. was able to articulate a conservative philosophy that was respected by other intellectuals.  Alan Greenspan, an admirer of Ayn Rand was accepted as adviser to presidents. Ronald Reagan, was able to use Hollywood looks and charm to convince many that "Government is not the solution.  Government is the problem. "  Lots of fraud artists such as  Ivan Boesky are described, but it was the philosophical and political groundwork that enabled them to prosper.

The proof that all men are not equal comes with the statistics that show productivity and wages not aligned as before.  The 1% are able to skim off what might have gone to the 99%.

One counter trend was exemplified by "In Search of Excellence" by Tom Peters who demonstrated that more money could be made by respecting and empowering the workers.  This movement had influence for awhile, but gradually waned as other forces took over.

George Soros, famous left wing sympathizer felt the markets were not rational and was able to take advantage of that amassing billions.  Herd behavior is not always predictable, but for those like George Soros who can pick out a trend overlooked by others there is an opportunity to make money. He is a man who is aware of social inequalities and has taken a good part of his fortune for progressive causes.

Eliot Spitzer, a very effective prosecutor of Wall Street abuse was put out of the picture.  It is true that his own human weaknesses brought him down from power, but it seems strange that few if any Wall Street bigwigs suffered from the financial shenanigans that led to disaster.

Inequality starts when someone is able to use leverage to gain an advantage.  At the same time that is the advice we are often given.  Save money, make a deposit on a house, borrow some money and wait for the price to go up.  Saving and risking can be virtues, but at some point some people are able to manipulate finances for their benefit, but to the detriment of others.  Finances do serve many valuable causes, but if they are not regulated problems can and do result.

Recently one story that caught my eye is from Tennessee.  As I understand it, Volkswagen with a history and comfort level with unions agreed to a vote of the workers to form a union.  Senator Corker announced that it would endanger expansion in Tennessee.  Volkswagen has denied  that an expansion decision would hinge on the vote results.  It does seem that part of the power structure resists any strengthening of weaker elements.

If you would like to learn more of Jeff's thoughts visit his website at:  http://www.jeffmadrick.com/
Posted by John F Davidson at 3:26 PM