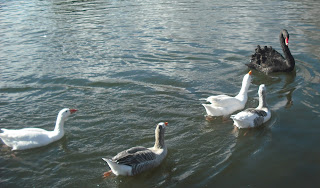 My bias is that either Hilary Clinton or Bernie Sanders would be much preferable to any of the Republican candidates--so if you disagree you can skip the rest.  The world will be a different place if either of these two become President of the United States.

I also confess that I liked Howard Dean who eventually lost to John Kerry in the 2004 primary.   Howard Dean has since made contributions to the Democratic party.  John Kerry after losing the 2004 presidential election has proved to be an admirable Secretary of State.  Either man would have been better than what actually happened--unnecessary war and a major financial crisis.

Underlying the political scene in the U.S. is that rich people have a disproportionate influence in the matter.  Unfortunately this will not change, but should in one way be the voter's focus.  In that regard Bernie Sanders is the knight in shining armour charging at the enemy.  Again, unfortunately one man can only do so much and any attempt to change the situation will run up against Congress who have proved to be most resistant to any great change affecting the distribution of wealth.  Congress has several entrenched ways of resisting radical change.  In the Senate you need 60 out of 100 votes to move forward on many laws.  In the House of Representatives gerrymandering makes it seem unlikely the Democrats will gain control over the next election or maybe even two.  This also presupposes that all the Democrats (most of whom have their own donor obligations) would support Sanders agenda.

Campaign financing has been widened since a Supreme Court decision on the Citizens United case.  As campaigns are so expensive and so prolonged this gives wealthy people a chance to dominate politics.  They complain about government stealing their money, about lazy workers or those on welfare, about undesirables killing our culture.  In actual fact most Americans are born handicapped in the sense that  they are unlikely to be given the opportunities offered to the families of the 1%.

The only political way around those obstacles is a real political movement where elected officials fear for their re-election  Perhaps if Bernie can get a bigger platform that might start to happen, but I think it would take another election in 2018 to give him the necessary leverage.

Like many armchair critics I have sometimes been disappointed in Obama.  He could have spoken out more often and louder.  In truth he is an excellent speaker with a good vision.  He is hamstrung not only by rules, not only by racial prejudice, but also by money.  He would not have been elected if he had not attracted large amounts of money which inevitably comes with obligations.  He has accomplished a lot and now that he is in his last year is offering a better vision that his monied opposition.  Many of his good things have squeaked in with a lot of muscling and luck.  With a congress more supportive he would have accomplished a lot more.

Hilary Clinton is a politician and understands she needs money and she needs political support to get elected and to get things done.  I think she is realistic in how to gain power and what the constraints are.  I think her intentions are reasonably honourable.  Her pragmatism is commendable.  But at the same time her hands will be tied with her dependence on Wall Street and other campaign donations.

To some extent she seems also tied into being relatively hawkish on foreign affairs.  To some degree this may reflect a need to counter Republican bluster, but much may just be her inclination.  I think she has a fairly good understanding of the Mid East, but not quite as inclined to diplomacy as Obama or Sanders.  It is a delicate negotiation to talk to find common ground and building trust and reflection that cannot be denied.  Projecting strength undoubtedly intimidates many potential troublemakers.  I think a big part of war talk comes from arms manufacturers who benefit from international tensions.

The drinking water crisis in Flint Michigan has had different responses from the two candidates.  Bernie demanded that the Michigan Governor Rick Snyder resign.  In some jurisdictions that might have happened, but not very realistic for a Republican Governor.  Hilary took the more diplomatic route and suggested that Governor Snyder seek federal help which he did shortly after.  You could argue her timing was good (as others had made the same suggestion), and that Bernie was within his rights, but this time Hilary did exhibit better diplomacy or political manoeuvering.  Flint hits closer to home for me as several years ago both of my children competed in the CANUSA games with Flint and we have visited Fint and hosted some athletes from there.

I think they both have similar ideas on climate change, but I think Bernie would have more leverage against the big oil conglomerates as he has avoided donations from big oil.  Either would give the planet a better survival opportunity than the Republican denialists.

Electability is a big concern.  The Republicans led by Trump are very blustery and getting the attention of the masses who do not understand the details, mistrust authority and have their own set of prejudices.  Bernie seems to tap into some of the mistrust sentiments, but is a lot more practical in what he offers.  Clinton does have some inevitabilities about her--Bill Clinton was popular and successful and Obama did trust Hilary.  On top of that some voters see that a woman is overdue.  Perhaps Elizabeth Warren could be a vice president for Bernie,  but not practical for Clinton.  Bernie would probably be a one term president allowing Warren to be the first women president.  Elizabeth is the first choice of many Democrats.

Gun control is one area where Hillary has the backing of more Democrats and Bernie is somewhat not quite on board.  I think here he might be the practical one as he has a constituency that is rural.

It is amazing to watch the Republicans cut each other up and try to outdo the others by promising more stupid action.  The Democrats (including forgotten Martin O'Malley) have so far avoided such antics, but they are now criticizing one another and picking out words outside the context.  It is very true that Hilary Clinton has the inside track with lots of connections and in the end this could be the strongest factor against Bernie.

My hope is that Bernie will do well in the first two primaries and get looked at by some of Hilary's backers, particularly minorities who will see he is more on their side than they realized.  Black Lives Matter seems to have gotten Bernie more involved in their issues and he does have a long history of supporting minority groups including gays.  Bernie may win even if he doesn't get the nomination because he will steer the Democrats away from catering to the wealthy.

The mainstream media is glossing over Bernie who has been attracting comparable crowds to Donald Trump and has more grassroots donators than anyone, but he is a threat to their masters.  Most of us realize the world is stacked in favour of the very rich, but feel powerless to do anything about it.  Bernie speaks for us.  Hilary might be more successful in minor improvements.  History swings like a pendulum--one side dominates, then becomes complacent and an opposition emerges.
Posted by John F Davidson at 1:07 PM