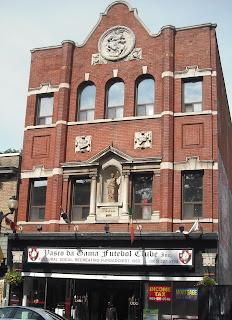 Donald Trump's motives may not be pure (they're not), but he raised an issue that makes me pause for a moment.  It is obvious that statues of Confederate warriors have raised emotions with terrible racial implications.  The removal of some of them has become a point of contention for white racist groups to rally against as a way of asserting their sick beliefs.  On the other hand there are others who think they should all be pulverized.

Perhaps some of us can reduce the issue to a personal level.  In my case I was dismayed to learn that some of my ancestors (on both my mother and father's side) were members of the Orange Lodge.  I imagine they did some good things, but what bothers me is that they were very anti-Catholic.  A few generations later I see Catholics as people first, some of whom are relatives and others are friends.  In Hamilton I am reminded of them almost every weekend when I walk by what used to be an Orange Lodge.  Ironically when their membership ran out of money a group of Catholic Portuguese  took over the building.  When I walk by I feel a small tinge of shame and recognize that hatred is potentially in all of us.

An historical benefactor of the city of Hamilton, Sir Allan McNab was a key person in putting down the Rebellion of 1837.  In theory I sided with the rebels who did in time force changes in the government, but it cannot be denied Sir Allan McNab accomplished a lot of good things.  If you are in the area have a look at Dundurn Castle (I drive by almost every day).

ISIS members demolished some ancient temples that had been standing for over 3,000 years. Westerners believe that proves how barbaric Islamic terrorists  (and by extension all Muslims) are. The radical Islamists felt they were blasphemous.  Many others thought they were beautiful and historical.

Thomas Jefferson has been a key figure in two blogs that partially explain his situation.   Edward E Baptist relates just how critical slavery was to the United States and the role played by Thomas Jefferson amongst others; http://www.therealjohndavidson.com/2016/12/the-half-has-never-been-told.html  In a fictional account, Stephen O'Connor speculates, using some historic evidence on Jefferson's relationship with a mulatto slave, Sally Hemmings:  http://www.therealjohndavidson.com/2017/06/thomas-jefferson-and-sally-hemings-make.html

Robert E. Lee after surrendering for the Confederacy had been asked to endorse a statue of himself. He refused saying he felt it would retard the healing process the nation had to undergo.  Isn't that a concern?  Many of the statues were built in the twentieth century as blacks were asserting their rights more effectively and have become a slap to modern blacks.

Many otherwise good people have a blemish on their reputation.  Are we to judge them for their sins or look at the whole person and realize that we are all human and subject to a wide range of faults?

What to do?  History should not be ignored as that causes another set of problems.  But when an offensive statue is placed  in a prominent location those in charge have to decide how to go forth.  Do they want to be known for being offensive to local citizens and visitors?   In some cases a logical place might be a museum where we can be reminded of our past follies.  Racists may well focus on the symbolism of their distorted beliefs, but the rest of us can say that artifact is historical.  What about the empty space left behind?  Sometimes that says a lot, but sooner or later someone will be inspired for something else.

The photo is of the building that used to belong to the Orange Lodge, but now belongs to the Vasco Da Gama football club.  I believe that is King William on his horse fighting the Irish Catholics.
Posted by John F Davidson at 11:34 AM