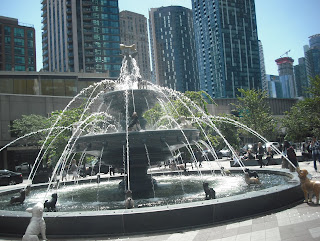 Donald Trump is the focus of a lot of well deserved criticism, but another authoritarian figure has intruded closer to my home.  This past week Ontario premier, Doug Ford demonstrated that he too can force his ill informed opinions on the majority that didn't vote for him.  We were warned that  he, although believing in climate change would do away with any carbon tax and sideline some renewable resource projects, take sex education back a few decades, eliminate a $15 per hour minimum wage plus a few other retrogressive measures favored at best only by a plurality of voters.

He failed to mention that he would use his power to change the Toronto Council.  As a former councillor himself he felt he understood it better and needed to correct a deficiency.  At the time only a few days from closing nominations for candidates and only a few months from election.    Individual commitments had been made based on existing rules and boundaries and in fact a lot of details had been formalized.  The disruption will be not only costly in monetary terms, but also in personal terms.

One commentator pointed that he not only had the legal power, but that he had the

One rationalization given was that with fewer councillors decisions could be made quicker.  No quarrel.  From that perspective it would be better to have a dictator.  Most dictators do seek advice as they can't be bothered with most items.  Some dictators will often ignore advice, for example Donald Trump.  Those in power tend to seek advice from those with similar philosophies and who profess loyalty.  History is full of irritating individuals who pointed out something different that eventually was recognized as better for everyone.  The more people engaged in the decision process the more understanding and commitment will result.  More thoughts on the importance of engagement:  http://www.therealjohndavidson.com/2014/12/the-art-of-engagement.html

Another rationalization was that it would save taxpayers money.  Again that could be true in many if not most cases.  Democracy is not cheap.  Aside from the expense of elections, millions have paid with their lives and their limbs.  Quick decisions are not always better or even cheaper.  Again, a dictator could help.  In more than a few cases they are better able to siphon off more than their share of cash flow.

Municipal matters have the most daily impact on citizens, but many of their concerns seem trivial.  Garbage, parking, snow removal, bus services, traffic lights and signs, librairies, recreation, schools, etc are often taken for granted, but a councillor who wants to get re-elected needs to be mindful of the details.  The details can be very demanding, and if too much for one elected official tend to be neglected.

Democracy is perhaps a mislabel.  What we really have is representative democracy.  No one person can manage all the affairs of a nation by themselves.  The average person has plenty enough to make a living and manage a household without added responsibilities of running a government.  Yes, there is a fine line between having too many decision makers and paying for them against a dictatorship.  Drawing the line requires a lot of thought and has to be reconciled with what the people really want. Mr Ford decided that he knows best and relieved the rest of us of that responsibility.  His decision that impacts literally over 3 million people was apparently made with little consultation.

Authoritarians like Donald Trump and Doug Ford like being in control and feel they know what is best.  In too many cases we let them.

The photo is of a dog fountain on Front St., Toronto which I assume must have been debated at one point.  I like it--good decision.
Posted by John F Davidson at 7:57 AM