"The only thing that will redeem mankind is cooperation. 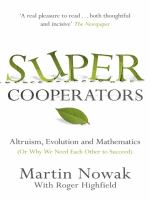 The title quote is from Bertrand Russell who has encapsulated the key decision for our future.

When one is taught evolution the first thing that registers is that competition is critical to best adapt to the environment.  We come to understand that our ancestors were the victors in this contest or we wouldn't exist.  Taken to an extreme it seems logical that if we are to win it has to be at the expense of someone else.  A dog eat dog existence is what we have evolved through.

Martin Nowak in "Super Cooperators"  contends that without cooperation  humankind would not have survived and certainly not evolved to a complex sophisticated society.  Innovation occurs because of cooperation.  The author combines an interest in mathematics and biology.  To pursue his goal of understanding the role of cooperation in evolution he uses game theory as a tool.

The Prisoner's dilemma forces a decision on two prisoners who are not aware of what the other person is deciding.  The consequences regarding their punishment are a lesser sentence, a greater sentence or the same sentence.  Repetition changes the response.  Initially it is rational to protect oneself, but better outcomes can occur if some cooperation happens.  The reader might feel this can happen only with conscious intelligent beings, but the author suggests at the molecular level randomness gradually has positive results.  Mutations are common enough and we understand it depends which ones are most adapted to the current environment that survive and procreate.

It is natural to be selfish at the expense of competition.  But it is also beneficial to cooperate and innovate to improve chances not only to survive, but also to thrive.  He outlines five mechanisms that provide opportunities for cooperation.  Direct reciprocity, indirect reciprocity, spatial factors, group factors and kin selection.

A key development in evolution was the division of labour.  E. O Wilson studied ants and other insects and discovered that they have a social organization comparable to humans.  They have divided up the tasks necessary to protect their community.  Read more  http://www.therealjohndavidson.com/2016/11/edward-o-wilson-tackles-meaning-of.html

To Martin  one of the key developments of evolution that helps set humans apart from other animals is communication with language.  He attempts to understand with mathematics.  Communication requires both a sender and a receiver, i.e. cooperation.  Language fosters cooperation allowing humans to communicate across time and space.  The first bits of language might have been grunts.

It seems like a hopeless task, but more technology suggests a few possibilities.  One line is the past tense of verbs.  What we call regular verbs have a standard format, eg. help turns to helped in the past tense.  What we call irregular verbs are different, eg.  know turns to knew in the past tense.  The author speculates that this indicates frequency of use and might indicate which words were more common.  Another line depends on sequence of words.  This will be an ongoing project, but indicates that language is an important part of evolution and is tightly tied to cooperation.

The tragedy of the commons has been illustrated by many games.  Essentially it boils down to whenever anyone can share a common resource, the resource tends to diminish.  Originally a common pasture was used as an example, but a modern example is climate change as anyone can benefit by exacerbating the environment and it requires a universal effort to abate.

Elinor Ostrom winner of the 2009 Nobel prize for economics dealt with the problem of common pools of resources.  Economics had long contended that economic decisions were rational assuming that all participants were well informed of options and above all rational.  In fact in many situations the "rational" choice was to take as much as you can get away with before other participants had taken more than their fair share.  But Elinor noted that many other situations were resolved to communal benefit.  A key factor to better use is that everyone is informed of the total situation.  Rules not only need to be made, there is needed a mechanism for enforcement.   Sanctions against abuse can start out simple, but need to be graduated.

Martin uses the example of dealing with water shortages in California.  They publicized abusers, promoted good users, used all manner of tools such as T shirts, stickers and awards.  California earlier concerned about air quality (that is another common pool resource) they imposed emission restrictions for cars that have been adopted by manufacturers.  The point he makes is that reputation does impact policies.

Martin feels that "the crucial interactions of everyday life are in the context of repetition and reputation."  He concedes that wherever there is cooperation there is also the danger of exploitation.

I would like to end with a quotation that sums up choices for our future.  "we can either move up to the next step of evolutionary complexity or go into decline even become extinct.  Though global problems loom large, we could be on the verge of the next transition in social organization."
Posted by John F Davidson at 7:42 AM