THE GREAT DISRUPTION: IS IT REALLY ON? 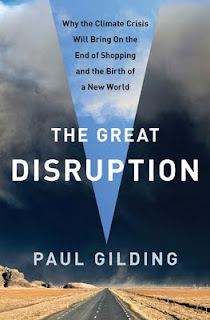 A lot of us have been hearing warnings of catastrophe for years and have hardened ourselves to it. Personally it takes little effort to ignore or dismiss most disaster predictions or to develop a deaf ear. After all one has to get on with living with all the regular day to day problems.

Paul Gilding is formerly a frustrated environmentalist that used to think if you could picture the impending disaster scarily, but accurately enough people would do something about it. He has now concluded that was delusional.  However he draws parallels with World War II. Looking back in hindsight there were lots of indicators and warnings. Not much heed was given, but when the boiling point was reached there was a massive concerted effort to deal with it. The key for Gilding will be when environmental problems such as climate change come with serious economic costs, public opinion will shift dramatically.

Like all predicted problems when they actually occur it is better to have some preparation. Gilding has plenty of advice, but tempers it with the realization that details are very hard to predict.

At the bottom of the problem is our feeling that our economy must be continuously growing. If there are finite resources sooner or later you will run into problems unless you find a way to use existing resources in a sustainable way. After the 9/11 tragedy the advice from George W Bush was to "shop." The implication being that to get back to normal and not let the terrorists win, the most important thing was to resume shopping and let our economy keep growing.

By our incessant emphasis on using up resources to keep the economy growing we are approaching a tipping point that points to a "Great Disruption."

The solution involves a bunch of things you are already familiar with and that we have been told are too expensive and disruptive for our economy and way of life. Reduce carbon emissions as quickly as possible and turn to alternative sources of energy. This means a switch from oil and its support industries to something cleaner with a lot of very difficult adjustments. It means cutting out as much as possible harmful practices that seem normal to-day. This process will not be completed for decades.

All is not lost. With disruptions come opportunities to re-direct our activities. Paul explores a basic goal of mankind--happiness. Studies he refers to suggest that happiness for poor people can be increased by small increments in wealth, but as wealth continues to increase it no longer necessarily increases happiness and certainly not at the same pace as before. But we are conditioned to strive for more wealth. A big disruptive shift of circumstances will encourage an examination of what we value most. If we choose mankind can provide meaningful jobs and a higher purpose for everyone. Fun will still be part of our future.

People can learn to work together for our overall happiness. Nobody knows how things will work out, but it seems to me after reading this book (and many books picturing upcoming environmental problems) we are inevitably headed to some major changes, in fact a Great Disruption. Paul Gilding thinks we can turn things around. I wonder.

Read the book. It is certainly thought provoking.
Posted by John F Davidson at 3:27 PM