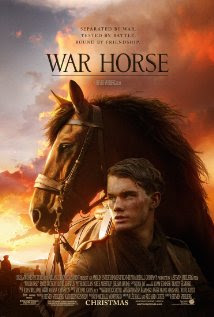 Now that we humans in charge of the planet don't actually need horses for transporting and fighting it is all too easy to forget about them. Fortunately humans get bored easily and don't have to spend as much time on survival activities as we once did. Although there are so many alternatives to being entertained, horses still can fit into a niche.

For instance some of us like to watch movies (or television shows) of historical times. You don't have to go back past World War I to realize horses played a critical role in the military. The recent movie War Horse, just nominated for an Oscar provided an occupation for a few horses and horse handlers. When I was much younger popular television programs were dominated by westerns. I grew up loving Trigger and Silver and others I can't remember and bugging my parent to buy particular cereals.

A big area where horses are entertaining is racing. A car is impressive, but really you know it is not a live being. You also know it requires a key, a gas pedal and brakes. A horse on the other hand is a little more unpredictable and even frightening. As a young boy a friend's father took us to a thoroughbred race and I watched one leaning on the rail. I was overwhelmed with the speed and size of the horses. I really haven't been to the race track too many times, but have watched standard bred races as well and when you get closer they too provide a sense of living, breathing power. The Rider only deals with Quarter Racing which I have yet to see. Quarter horses are the fastest breed over a quarter mile so acceleration plays a big role.

The big attraction with racing is betting. For a brief time in my life I indulged in some under age betting and was quite thrilled to win a few small bets. In university a friend of mine, Martin Weber (who went on to become a blueberry farmer and an usher at my wedding) had a system. There are lots of systems, but I would say his was pretty sophisticated. His system was based on the minimum payout being $2.20 on a $2 bet. That 20¢ legally required payoff could sometimes be disproportionately high compared to the actual risk. He put tough criteria on what an overwhelming favorite was and that boiled down to at most one or two bets a day and they had to be big and they had to be at the very last minute. He believed that someone who had inside information (read illegal) would leave their bet to the last minute to take advantage of long shot odds so he had to be careful not to get caught that way. In the end he took his system to the track, declared that it worked, but that it was too hard on his nerves.

Working for The Rider the focus is often on English style show jumping, dressage, barrel racing and reining. When you appreciate the finer points a little better these are all very interesting. Show Jumping reminds me of golf (which I often get stuck watching with relatives that are active golfers) in a nice way. The tension builds up as riders take turns trying to get around a challenging course quicker and with fewer errors than their competitors. When it comes to jump off time the tension is very great at each jump. Barrel racing again is similar when you see a succession of riders (usually the faster ones seeded to go at the end) trying to trim a few tenths of seconds or even hundreths). Reining always has spins and slides that are exciting. I left dressage to the end because it has the most boring reputation. When you can appreciate that it can be very difficult to control a beast that weighs half a ton or so and get them to do very intricate maneuvers is amazing. When they add music to the mix it becomes an aesthetic experience. My favorite really is quadrilles when four horses are ridden in intricate patterns. Many of us can recall the RCMP musical ride which is just another pleasing variation.

I left out another experience and that is eventing. I have seen it a bit on television and have noticed that amongst some riders it is a passion. Because the action in the country runs are so far away it is difficult to televise. A helmet cam really lets you appreciate the demands. Click
http://www.youtube.com/watch?v=frbETD7Eh74. I was fortunate to watch Mark Todd (an Olympic two time gold medalist from New Zealand) give a short clinic at the Royal Winter Fair.

Vaulting is basically what you can see at the circus, but with a difference. In the circus they like to make easy things looks dangerous, but in vaulting the idea is to make difficult things look easy.

Entertainment is one of the most desired goals of humans, but horses are more useful than just relieving our boredom or exciting our desensitized nerves. In future blogs I plan to write about how they are useful in police actions, logging, psycho-therapy and just for your human soul amongst other activities.
Posted by John F Davidson at 8:44 AM