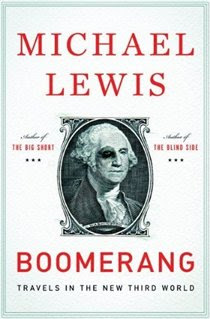 "Boomerang" is my second Michael Lewis book. The first was "The Big Short." The Big Short told about a few individuals who correctly analyzed the madness that was gripping American Financial circles. What makes sense today, did not make sense in the frenzy leading up to the 2008 crisis.

In both books Michael is very good at digging out the short term thinking engaged in by most people and exploited by intelligent opportunists.  Greed tends to be a short term drive where we want something now and don't worry about the long term consequences. Others exploit this modern human tendency often for short term benefits as well.

Michael Lewis has a talent for getting people to trust him. He finds information at all levels.

In "Boomerrang" the author travels to Iceland, Ireland, Greece, Germany and California. He has a tendency to stereotype nationalities as one way of explaining the different aspect of the financial crisis.

Iceland is a country that is very literate and educated but for which most of the income used to come from fish. From my job I am well aware of another commodity, Icelandic horses, but that is another story. A few years back some educated Icelanders discovered international investments and felt they were smart enough to corner their share of the market. They borrowed massive amounts of money and bought a wide range of products all around the world. They got carried away and raised their standard of living very dramatically. They soon were involved in some investments that turned bad and eventually they owed more money than they could generate. An interesting side light is that the men who used to run the country have been replaced by women which the author thinks is perhaps an improvement.

In Greece the problem seemed to revolve around the average Greek expecting all the modern benefits, and as is normal not to want to pay for it. Of the examples given they are the most adept at actually not paying taxes. They lowered pension requirements while also failing to increase money to pay the ongoing demands. One group of monks very cleverly became real estate kings. At the moment there are a lot of disappointed people.

Not too long ago Ireland was touted as an example of free enterprise. Then they also over-borrowed, but in their case with more of an emphasis on buying Irish things. They soon found themselves in dire straits. At the heart of it would be American educated bankers.

Germans are portrayed as very honest hard working people. They are very hurt that their hard work and honesty is expected to make up for the lazy and somewhat dishonest Greeks. But they too gave in to greed. They loaned for subprime mortgages in the States, to the Greeks and other Europeans without due diligence. Their problem was that it was much easier to seek opportunities among foreigners as Germans were not very likely to get involved with many of the financial instruments available commonly in the United States. Their leaders had promised that Germans would not have to bail out less virtuous members of the European Common Market.  Now many feel to protect themselves they will have to do just that.

California brought together a lot of thoughts in some graphic examples. Many cities have found themselves locked into unrealistic pension payouts, increasing employee wages and unable to raise taxes. A phenomena common around North America is how the police and fire departments are able to leverage each other for ever increasing wages and benefits. It has reached the stage where many municipalities are laying off police and fire personnel to dangerous new lows. In the town of Vallejo the fire and police departments are bare bones.

At this point the author points out that now that there are few resources to work with, the Vallejo fire department is finding ways to be more efficient.

One interviewee suggests that we North Americans (and too many others) have gotten so used to instant gratification that we have lost sight of the consequences. Examples of consequences include obesity, gambling and drug addictions. Using inflated real estate values houses are re-financed to give more cash. Credit cards are taken to their limits and restrictions are bent wherever possible. We cannot self regulate and of course there are political forces trying to de-regulate. Eventually the environment will force adjustments.

In summary the only solution seems to be somehow to encourage long term thinking. In the meantime we all have to learn to live with the short term thinkers. Consumerism taken to the limits falls back on itself.
Posted by John F Davidson at 9:13 AM