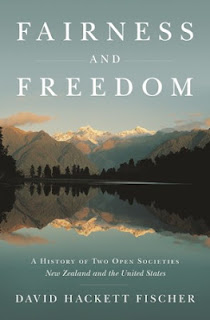 When my son, Michael recently moved to New Zealand to try his luck at getting a job this book got my attention.  In some ways it is one of the more profound books I have read.  Profound might be interpreted to mean they supplied me with notions that support my already established beliefs.  Perhaps so, but  not enough people have really thought out the issues of fairness and freedom.

New Zealand and United States are both open societies with much in common.  The American author uses a comparative study of the two to analyze what he sees as a significant difference.  In United States freedom is the underlying philosophy, while in New Zealand it is fairness.  Fairness sounds namby pamby to those who feel individual freedoms are the highest value of all, but freedom, not really understood can be perceived as selfish and short sighted.  Your freedom should end somewhere away from my nose and vice versa, but freedom lovers don't always appreciate that aspect of it.

Each concept has its faults, after all human nature is not conducive to restraints of any kind.  Envy, resentment, vengefulness, pride, fear and above all selfishness are normal human traits.  Harnessing those traits is a hard task if one wants to optimize civilization.

They were both English speaking colonies.  The United States gained its independence after a bloody war whereas New Zealand took a longer more legislative transition.  Americans fought the original inhabitants, known as Indians and pretty much subdued them.  The New Zealanders fought the Maoris who were more united, at least in language.   The Maoris managed to find a more decisive role in their society.

Land seemed endless in America, whereas there was a definite limit to New Zealand.  Land reform helped to stabilize affairs in New Zealand in 1891.  There was a much higher percentage of owner occupied land in New Zealand.  New Zealand abolished provinces in 1876 whereas United States is really a union of states with federal oversight.

From the beginning Americans felt the need for personal liberty, although they justified slavery. Over time the New Zealanders developed a concern for fairness although they abused the Maoris.

In 1920 New Zealand put restrictions on gun ownership.  Americans are very vocal about their gun rights under the Second Amendment.  Violent crime and imprisonment are much more common in America.

United States adopted an electoral college in order to assure the smaller states they would have disproportionate influence, but often distorts what the majority of Americans actually want.  New Zealand adopted a proportionate voting system that many people (including myself) believe is more fair and better reflects what New Zealanders want.

After World War II,  New Zealand fought against the United Nations Security Council having vetoes wishing to give more power to the General Assembly.  They always seem to fight for peaceful negotiations.  Ronald Reagan was infuriated with their refusal to accept nuclear battleships on their ports.

After a lot of historical details of both nations the author summarized his thoughts on the two title traits. Freedom can be interpreted in many ways, but essentially refers to no or minimal restrictions on what a person can do.  In reality one person's unrestricted freedom runs up against another person's freedom.  One of the best examples deals with slavery.  Slave owners were adamant that they had the right to own other humans whose freedom obviously meant nothing.  Any law is a restriction on someone's freedom, but is often to protect others.

Tea baggers seem to resent taxes, and claim that the American Revolution was fought against taxation.  In fact the actual Revolutionaries were against taxation without representation.  After the Revolution taxes were increased as it was realized money was needed to maintain a free and strong republic.

Fairness is a restraint on freedom.  One person's unlimited freedom has to cut into the freedom of another.  How do we determine what is free and fair?  The author has a good perspective well worth examining.


Rich people in the United States sometimes are heard to say that poor people are just envious of successful people.   In New Zealand and other countries envy has been a problem.  Equal opportunities do not lead to the same outcomes.  There is envy that some people with talent or who work harder achieve more.  There are many people who feel entitled, some because of wealth and others because they want to receive more than they give.  Fairness would include people rising to the top of their talent and effort.

By the way my son did get a job teaching and seems very pleased with living in Auckland.
Posted by John F Davidson at 5:12 PM