TRAVELS OF A SALESMAN PART 1 ONTARIO

For about two decades I could be described as a traveling salesman.  Mostly calling on pet store retailers, feed stores, tack shops, veterinarians and health food stores.  It was a tough slog, but I did learn a lot and had many enjoyable experiences.  Those of you stuck at a desk or even at one location miss a lot.  I know because I am now mostly stuck at a desk.I started selling for a start up company on a local basis and then succeeded in developing retailers and then wholesalers that extended our reach throughout most of Ontario. That was a great opportunity, but certainly a challenge. In order to keep the wholesaler happy we had to persuade retailers further and further away.  Later I signed up wholesalers in Quebec and the Maritimes, but that's for another post.

I would drive into a town or city, make as many targeted visits (usually less than 5 minutes each) as possible in a short time and only superficially got to appreciate where I was. I did learn my way around and between a lot of Ontario towns.  I was a real fanatic for not wasting time aiming to make my first call at 8:00 and occasionally could find those open even earlier.  Contacts would be followed up by phone and another visit.

Driving through the countryside was enjoyable, especially in sight of water (rivers and lakes in Ontario and oceans elsewhere).   Often I would be cruising around the speed limit and perhaps focusing a bit on my next call, but in the rural areas the feeling was very different.  There is something awesome in nature.  Perhaps I am kidding myself that speeding along asphalt and concrete with signs of civilization not hard to find brings you back to nature.  Nonetheless it is enjoyable in a way hard to describe.

Normally I enjoyed watching farm animals, but once I got closer than intended.  Taking a short cut near Pembroke I came across a herd of cows that clogged up the road.  I learned, that despite their fearful size they are very anxious to get out of your way, but are a bit slow to figure out the fastest way to do that.

I would gladly visit many of these places again with half an excuse. Trying to sort through all my favorites it could vary, but I will declare right now my favorite place in Ontario would be Picton (Prince Edward County in general). Just a quaint little town on the water with nice people. Once I visited it without any intention. I was in Kingston and took a route not knowing where it ended up. An unexpected ferry boat took me to Picton.  The fact that the county has developed a reputation for wineries only enhances my interest.

Downtowns are different so they inspire another sort of respect.  Old architecture, innovative design. Bigger cities that I liked included London and Kingston, both university towns with minimal industry. Ottawa is a beautiful city, I can remember seeing skaters on the Rideau Canal.  Actually Toronto does have some pleasant stretches--Mount Pleasant really is pleasant and Bayview beside the Don Valley is also very nice, especially if you think of Toronto as mostly skyscrapers and homes.  I remember TVO had a program about the best main streets in Ontario and one of the winners was the Beaches along Queen St. and I tended to think it was a unique place.

Don't mean to neglect my home base of Hamilton.  Most of the time I just drive to and from work and don't really see everything, except I get to go by Dundurn Castle and Cootes Paradise several times a week.  Hamilton now includes a much larger, mostly rural area.  Although many people make fun of the Mountain, it does make Hamilton unique and gives a beautiful view.

All along the Great Lakes are many scenic nice places where the residents are happy with their choice.  A few places I would name include Goderich, Kincardine, Owen Sound, Meaford, Midland, Port Stanley, Port Dover, Amherstburg, and Port Hope.  Places not so much on one of the Great Lakes that I enjoyed visiting included Hanover, St. Mary's, Perth and Ayr.  There are too many places to name.

Some places are special.  I remember trips to drop off orders to a wholesaler in Wellesley.  I knew they were famous for apple butter and one time I approached a local store who was out of it.  He directed me to the head office a few hundred yards away.  There I discovered a new product, called pumpkin butter not available in stores and it became one of my favorite condiments that I bought every chance I got.

The Hills of Caledon just north of Brampton seemed to be on the road for a lot of my trips.   I got so I liked driving up and down the hills.  Especially with the fall colours.  Highway 10 or Heart Lake Road.

Up north New Liskeard got my fancy. Part of the fascination was the water. A very pleasant drive was the road between New Liskeard and Haileybury beside Lake Timiskaming. A family friend spent time in that area and recalled that drive as well. On another occasion I approached it from the Quebec side and got a lovely view from the other side of Lake Temiskaming in the early morning.

Sudbury is known as the Rock.  I dragged my wife and kids for a mini vacation where we visited Science North and the Big Nickel.  After one sales trip to Sudbury I met two vet technicians at a trade show who knew about my visit, because they had heard about it, although I missed both of them.

My best hotel value--$26 well heated and a good size was in Gogama which is about half way between Sudbury and Timmins.
Getting to Sault Ste. Marie and Manitoulin Island was usually done by visiting Sudbury first  or on one occasion by way of Timmins and Chapleau.  On one occasion I decided to use the ferry route from Tobermory.  It is the shorter route, but if timing is not careful could take longer.  Needed to get up earlier than usual, but made it and the ferry was relaxing and allowing me to get better prepared.  I also was able to cover Manitoulin Island a little more thoroughly.  Another ferry boat ride was to Picton.

When I look back on it the key thing was the people. Some were chatty, friendly and helpful, but others couldn't get rid me fast enough. One customer liked to say he didn't like to buy except from people he could get close enough to to punch in the face.  Usually in Toronto store owners are over whelmed with salesmen touting "the best" whatever. The most severe rejection I ever received ended up becoming a customer through a colleague that was more approachable.   Everyone is unique, but at the same time we have something in common with everyone.  Every salesman learns that, but I have been fortunate to enjoy a wider diversity because I went to big cities, small cities, towns and rural areas in distinctive different regions.  There is a different culture in each segment and also some diversity in each segment, but they also have a common core.

I enjoyed reading about the places I visited.  Enjoyed some radio programs and learned of stations at different locations CBC and  NPR were stations I listened to.  Listened to music tapes, sometimes to put me in a mood of appreciation, for instance on the long drive to Timmins, made sure I listened to Shania Twain.

The challenge to earn a living also gave me the opportunity to learn about the province I live in.  The more you understand the better service you can offer.

I wish that digital cameras had been more affordable earlier.  The following photos are a small sampling of what I enjoyed on my more recent travels. 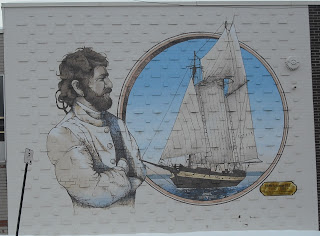 wall mural in Midland Ontario, one of many which I think is a great way to beautify a town. 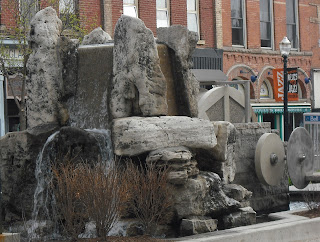 mockup of water mill in Orangeville,  I am not sure how functional it might have been, but very impressive.

mural in Welland, Ontario. This is a town with a very wide selection of murals.