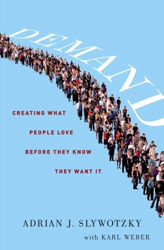 The most familiar law of economics is the law of supply and demand or at least its title.  One way of getting rich is to develop high demand for something you can supply.  Of course if the demand is not high enough you might lose money.  The supply you have might need to be re configured and more importantly re-thought.  The author of "Demand Creating what People Love before they know they want it" has studied successes and failures.

Adrian Slywotzky with Karl Weber analyzes some efforts that succeeded in creating spectacular demand and a number that failed to do so although they had a lot of elements working.  He finds many different paths to success, but is unable to devise a formula.

One common theme is to study customers in depth and identify hassles that they may or may not be conscious of.  Eliminate a hassle and you are part way to building demand.  The author's very last words are apt, "Don't look up.  Look in the mirror."  I interpreted that to mean look at what hassles you have that impede you from optimizing your life. There are many you are not conscious of and others that you just accept.

There are six major factors the authors attribute to a successful launch.  Magnetism, fixing the hassles, building a complete back story, finding a trigger, build a steep trajectory and develop variations.

The authors give interesting details of campaigns that mostly start with eliminating hassles.  Often it is a hassle that had unconsciously been accepted.  Often other companies have pointed in the right direction but, failed to find some small detail.


Most new product launches fail.  The author suggests each launch should include a Pre Mortem.  That is a study of all the things that can go wrong.  The whole team needs to be involved.

A trigger is something that gets prospects off the fence.  They have some interest and awareness, but feel a bit wary of making a move.  What change or adjustment can accomplish this.

Dr Sheldon Zinberg the founder of Caremore has taken on a monumental task; providing health care for the elderly under financial constraints.  It is a truism that prevention cuts the expenses of a cure, but that fact had been lost in practical human terms.   This is where hassle reduction can make a tremendous difference.  A common problem with elderly patients is that they miss many appointments for lack of transportation.  Caremore provides a pick up service when needed. The staff picks up on small problems and takes action.  Noticing that many elderly have serious problems from falls they realized a small thing like trimming their toe nails reduced falls.

Dr Zinberg assembled a team that works together by sharing information.  At one point commercial insurance companies withdrew their support.  Caremore developed its own financial support system. They were able to improve health results at much lower costs.  They prove the money spent on health care can be well spent.  Did I mention that demand for the services is ever increasing.

Another example is the Seattle Opera Company that undertook a study to determine why so few of their trial customers repeated attending an opera.  It turned out the number one problem was parking and so more effectively making it more convenient encouraged more repeat business.  They like other examples expanded demand by developing all sorts of variations to attract different niches.

Wegman's is a chain of grocery stores originating in Rochester, New York.  Robert Wegman, a son of a co-founder when given position of president raised every one's salary.  They don't just say people are their most important ingredient they really mean it.  They attract the best people and empower them.  Robert said, "to do something no one is doing and to be able to offer the customer a choice she doesn't have at the moment."  They developed innovations in different departments empowering all employees.  Just started another book that states Wegman's employee turnover of 3% gives them a very big edge over the supermarket average of 47%.

Another quote that reflects their thinking from Robert's son Danny when he became president, "During difficult times like these it's OK with us if we make a little less money."  From other sources it seems to be true, that if you can maintain your share of the market in rough times you will grow when times get better.

Sony first came out with an electronic book and was actually fairly well advanced.  But they could not get the co-operation of book publishers who felt threatened by this new media.  Kindle worked very hard to get co-operation and when they launched they had 88,000 titles available.

Eurostar is studied through its initial failure.  Expectations were that the Chunnel would take away business from airlines, but that was very slow to develop.  A new manager  Richard Brown was brought in.  He spent a lot of effort in reducing hassles.  Later on he helped develop variations.   Breaking down to their natural niches he developed strategies that created interest from sub groups as business men, friends visiting each other, students and retirees (often with children).  The slowest link was from London suburbs) to the Chunnel and this hassle was greatly simplified making the trip much quicker.  Connections to those outside London improved and they found a way to hook into overseas travelers that initially eluded them.

Other examples include Tetrapak from Sweden,  Zipcar, Netflix and Pixar.

Another bit of advice that I liked comes from Jerry Bruckheimer: " Don't just listen to customers. Watch them."  They don't always act like they say.

For those who would like to keep up with the author's post publication thoughts you can go to a blog http://www.demandthebook.com/
Posted by John F Davidson at 3:35 PM