Perhaps a few of my readers have not guessed my age, but I am going to reveal it now to help explain why I feel a special relationship with Mohandas Gandhi.  I was born on the same day that he was assassinated January 29th, 1948 in eastern standard time zone when it was already January 30th in India.  When this was discovered I was at a very impressionable age.  All that pre disposed me to explore all sorts of things Indian such as books, Indian food, Hindu philosophy, music and lately Bollywood, this last with some help from my sister Rebecca.

I discovered Gandhi as an elementary student always fascinated by odd things  at the library.  Gandhi was unique.  He wasn't a warrior yet he had helped free India.  I read all sorts of books about him as a child and a young man and along the way discovered the date connection.  Gandhi led a life that is hard to imagine.  He was educated and a successful lawyer, but decided on an austere path personally and as part of campaign to gain independence for India.

Many think of Gandhi as a saint, but he was far from perfect.  He was consciously aware of many of his faults and perhaps because of that could understand others better.  He was obsessed with diet, bodily functions and sex.

Below are some movies and books that have colored my thinking. 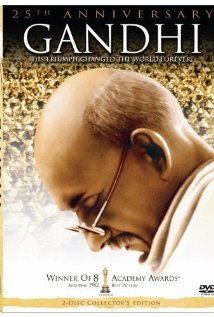 "Gandhi" came out in 1982 with an all star cast and introduced Ben Kingsley to play Gandhi.  A lot of dramatic action including his assassination at the movie's beginning,  a horse charge on Indian protesters, Amritsar massacre, beatings and the violence of partition.  This movie deals a lot with the political machinations. One remembered point is that Gandhi declared although he believed in non violence, he didn't believe in being passive.  Civil disobedience is his real strategy.

"Water" barely mentions Gandhi, but I wanted to review it again as it has a Canadian writer/director, Deepa Mehta.  The main focus is on the treatment of widows.  They have three choices: go to a fiery death with their husband, live an essentially chaste and dehumanizing life or if family permits marry a younger brother of her husband.  The law was changed, but customs are much harder to change.  Gandhi was against child marriages.  John Abraham, who later became a bigger star had a major role playing a disciple of Gandhi. Near the end of the movie we see Gandhi at a train station he is passing through after being released from jail.  Paraphrasing he says "For a long time I thought God was truth, but now I know Truth is God."

"Hey Ram" was my introduction to Kamal Hassan who wrote, directed, produced and starred.  He brought in some big Bollywood stars in Shah Rukh Khan (playing a secular Muslim) and Rani Mukerji.  It brings to light  the religious hatred between Muslim and Hindu just waiting for something to ignite. Gandhi angered many Hindus who felt he was trying too hard to placate Muslims.  Gandhi is played by Nasseruddin Shah, another actor I have come to respect.  Hema Malini was one of the few star Bollywood actresses who made movies after having children.  She also became a politician.

"Lage Raho Munna Bhai" might actually offend some people as it takes a humorous slant on Gandhi. Not to be disrespectful, but humor can often make a point that escapes serious discussion.  In this romance, Sanjay Dutt plays a gangster who takes a fancy to Vidya Balan, a radio announcer.  He lies and manipulates to impress her that he is a Gandhi expert.  Magically the ghost of Gandhi appears and is willing to help him win the girl, but has one request; that Sanjay "live truthfully."  As Sanjay courts Vidya he has a type of conversion and you see a number of situations where he helps people in awkward, even tragic situations overcome their difficulties applying Gandhian principles.  I would say persistence and innovation in civil disobedience can be very helpful.  A memorable quote from Boman Irani--"his ways don't work today" and later he succumbs to a Gandhian strategy.

"The Road to Sangam" depicts a story long after the death of Gandhi.   Part of his ashes that had been divided to be spread to different regions of India had been forgotten.  In an effort to duplicate the original intentions a Muslim mechanic has been asked to restore the engine that was in the original car to drive the ashes to Sangam.  At this time the mechanic is under stress due to Muslim-Hindu conflicts.  Muslim organizers want to have a strike to demonstrate their determination.  The mechanic feels trapped as he had already promised to fix this engine.  He realized that Gandhi was a friend of Muslims and the reason for the independence of India.  I had seen  Paresh Rawal in numerous roles, usually supporting, but very diversified.  I can better appreciate him as he was given the major role in this film and put in a very subtle performance.  The lessons of Gandhi are brought out by the mechanic who realizes that Gandhi was above religion.  The mechanic is attacked physically, but eventually wins over many of his fellow Muslims.

Watching "Gandhi, My Father"  I was surprised at the involvement of Anil Kapoor as producer and Askaye Khanna as lead actor in such a serious and controversial film.  Controversial  as many Indians felt it disrespectful to depict Gandhi as anything but saintly.   Despite being well educated himself, Gandhi actively discouraged his four children (and other relatives) from formal education.  His eldest son, Harilal wanted to be a barrister like his father, but Gandhi thought he would serve the cause better without university.  Harlilal became an alcoholic. One quote from Jan Smuts, Gandhi "is a politician trying to be a saint."

Reading "Gandhi, The True Man Behind Modern India" by Jad Adams   Gandhi was seeking spiritual perfection and often overlooked the needs of those dependent on him. At one time he believed meat gives strength, but was a vegetarian and involved with vegetarian issues.  Like many powerful men he had a strong sex drive, but felt that was in the way of spiritual perfection.  His four sons and his wife were not given any favoritism and were expected to live to high standards.  Obsessed with bowel movements and enemas and sexual abstinence.

One last book I stumbled on while working on this post, "Gandhi and the Unspeakable" by James Douglas.   One emphasis was that Gandhi was aware of many Indians who preferred violence to throw out the British.  Assassinations occurred close to him.  In 1909 he talked and argued with Savarker in London, even as Savarker was planning an assassination in India.  He seemed to have some respect for those willing to die, but thought they were misguided.  Savarkar was a revered leader to Nathuram Godse, who also had confronted Gandhi several times.  The underlying problem was a prejudice against Muslims who Gandhi was trying to reconcile with the Hindus.  The British controlled India by a divide and rule campaign and that thinking permeated the partition process.  Savarker the mastermind escaped a conviction, but apparently wrote a nine hour speech for Godse.

Satyagraha is a word coined by Gandhi shaming some one by setting a moral example.  Protesting was done assuming they would be beaten.  In some of the movies it was very scary and I can appreciate it takes more courage than attacking someone even as you realize they might attack back.  Gandhi was not a pacifist, he was very proactive.

In conclusion I realize my boyhood admiration overlooked details inaccessible to me at the time.  Gandhi had a very strong will and a desire to reach spiritual purity.  He accomplished some important things and and in some ways set a good example--there are other ways to prevail besides violence.  I still admire Gandhi and am grateful that I have also discovered more of a most fascinating country, India.
Posted by John F Davidson at 12:03 PM