JIMMY CARTER, A MUCH MALIGNED HERO 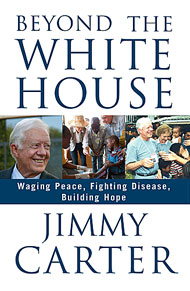 When Jimmy Carter's name appears, too often it is derisively.  He is most remembered by some as a one term president who Ronald Reagan managed to belittle on his way to the White House.  Current commentators denigrate in passing.

I look at him differently.  He was a man of principle and of vision and not one who rested on his laurels.  He made his share of mistakes, but people too often overlook the good things he accomplished and the obstacles that were not his fault.  This past September 7th marked the point where Jimmy had the longest post White House career of any president--31 years.

Jimmy Carter trained as an engineer in the navy and later studied nuclear physics.  He is no dummy and has a closer view than most of one of the most powerful forces in the world today.

His first effort to run as a state senator in Georgia ran into some ballot box manipulation which with a lot of effort he was able to overcome.  He became conscious of ballot box abuses and later became involved with election monitoring.

When he decided to run for president his timing was good in that voters were sick of the corruption that Watergate symbolized and leading Democrats were sidelined.  He ran as an outsider and made some very good campaign moves.  For instance he took the traditionally early Iowa primary much more seriously than his rivals did and was able to build some momentum from there.  He used zero based budgeting as governor and as a campaigner.

For his inauguration he and Rosalynn stepped out of the official vehicle and walked.

Gerald Ford stirred up some resentment by pardoning Richard Nixon, but perhaps that was part of a necessary healing process.  Jimmy Carter's first act was to pardon Vietnam War draft dodgers.  A lot of hard feelings, but also helped to soften many wounds.

As an outsider he did not have any natural constituencies.  While trying to maintain his independence he offended many insiders.  As president you could say his honeymoon lasted about one year and things went downhill from there.

In a famous Playboy interview he was criticized for admitting that he had "lusted in his heart," but he was faithful to his wife.  Honesty is not always rewarded in politics.

First Ladies like to get involved in new non partisan initiatives.  Rosalynn chose mental health, a concern too many are reluctant to deal with.  She carried on this interest with the Carter Center by amongst other things encouraging journalism to cover some of the issues.  She was concerned to alleviate the stigma that complicated identifying and treating mental illnesses as well insurance concerns that also made it more difficult.


During his presidency the Arab oil cartel  decided to use an embargo to express their frustration. Jimmy Carter realized that America had to reduce their dependency on oil.  He encouraged alternative energy sources, but was also keen on conservation.  Famously he put solar panels on the White House which were dismantled by his successor Ronald Reagan who wanted to make a point. Although Reagan left a bigger imprint on America at the time, I feel Jimmy was the better man with the better message.

When the Russians invaded Afghanistan Jimmy Carter decided to boycott the Moscow Olympics. This was greeted favorably at first, but later there was some resentment and of course the Russians reciprocated by boycotting the Los Angeles Olympics a few years later.  I have very mixed feelings as I have always thought of the Olympics as non political-- a chance to put differences aside.  At the same time there are few options available outside of war that would have as strong an impact.

His mother Lillian proved to be an asset to Jimmy, but his brother Billy an embarrassment.  Billy was alcoholic and non political.  He was used by other people and at one time became a lobbyist for Libya.

Carter was able to take advantage of Anwar Sadat's willingness to take a chance.  He invited Menachem Begin and Sadat  to Camp David.  The Israeli was very suspicious and fearful of any deal.  Egypt was the only Arab country that had any military strength to remotely rival Israel who had almost unlimited access to American resources.  There was a lot of going back and forth before a deal could be made.

I had read that on a world tour, Jimmy asked Rosalynn where she would prefer to spend New Years Eve and she chose Tehran.  Although Americans dealt with all sorts of dictators around the world, Jimmy had a reputation of high moral standards.  Unfortunately his admiration for the Shah was about to blow up in his face.  Americans forget that under President Eisenhower, the Iranians staged a coup d'etat against an elected president and replaced him with the Shah.  The Shah organized secret police  (with help from the CIA) and exiled Muslim leaders and used oil revenues for his own benefit.

During Jimmy's tenure the Iranian people rose up and caused the Shah to flee.  It soon developed that he required sophisticated medical treatment.  Carter consented to let the Shah seek it in America. This was a factor in Iranian students deciding to attack the American Embassy and take the staff hostage. For awhile there was some hope it might end soon, but it dragged on.  Carter seemed helpless and a failed rescue attempt made him seem more so.  In September Saddam Husein thought it an opportune time to attack Iran which further disrupted any progress Carter was having for the hostages.

Some of the circumstances around his 2nd presidential election are suspicious.  Most everyone cites the Iran hostage crisis as perhaps the most critical factor as it dragged on for 444 days.  Although you would think Ronald Reagan's tough words would encourage the Iranians to compromise with Jimmy, they in fact held off until Reagan's inauguration day.  I had read reports that the Republicans had arranged this behind the scenes and it is known that deals were done involving Iran and Nicaragua.

Could he have brought stagflation under control?  Perhaps some leaders with intelligent support from Congress, but realistically not very likely. He did a lot of things to reduce a deficit that aggravated employment.

The Democrats did not unify under Jimmy Carter and he had to deal with a serious campaign from Ted Kennedy.  That obviously cut into his support and distracted his administration.  John Anderson ran a third party candidacy which also hurt.  For one of the debates his preparation notebook had been stolen and later given to the Reagan team.  In the end he got about 41% of the popular vote and Reagan got 51% and the essential electoral college votes.

Jimmy and his wife had been humiliated and went back home to Plains.  Before too long people asked for his help and advice.  Eventually he looked around and saw all sorts of problems that became challenges.

It is difficult to sort the variety of tasks he and Rosalynn tackled.  They formed the Carter Center to give some focus to all their efforts.

One interesting task was to supervise elections in Nicaragua.  He felt the Sandinistas were too confident and when they were rejected at the ballot box there was fear they would not accept the results.  Carter pointed out that losing an election was not the end of the world.  He became involved in numerous elections, not all of them going smoothly.  He had to leave places where he refused to compromise.  He pushed for fair elections.  It was not uncommon for violence to surround many of the elections he was involved in.  Many politicians recognized Jimmy gave credibility to the election results.   Other elections monitored included Haiti, Sudan, Ghana, Guyana and rural China.  Not everyone co-operated, but generally Carter played a positive role.

An issue that he pushed against as president was Israeli settlements in Palestinian territory.  He kept pressing the issue and at one point wrote a book, "Palestine, Peace not Apartheid" which was condemned by many politicians.  I believe he identified the key obstacle to peace in the Middle East. It is unfair to say that he was trying to harm the Israeli cause as he seemed to feel a resolution to this issue would better insure their long term security.

He has been involved in mediating some tough foreign situations including Korea and Haiti.  In 2002 he was awarded the Nobel Peace Prize.

Although Americans manage to deal with China, Vietnam, and Venezuela, a solid core of anti Castro people in Florida have made it very difficult to have bi-lateral relations with Cuba that would benefit everyone.  In office Carter had lifted some restrictions with Cuba.  Jimmy didn't always see eye to eye with Fidel Castro, but he was able to push him to loosen up things a bit.  He also worked with Cuban medical resources in many of his disease campaigns..

Jimmy identified many diseases that were being neglected.  One they helped wrestle to almost distinction was guinea worm disease.  It is not fatal, but causes pain and debilitation.  One tool that combats the disease is netting that serves as a filter.  A deeper problem was that in some areas the water was considered sacred and he had to persuade many villagers that they had deal with the water in a practical manner.  In treating river blindness (onchocerciasis) they learned that a patented medicine for heartworm was effective and took steps to incorporate its use to alleviate a lot of suffering.

Another project Jimmy is associated with is Habitat for Humanity where he did manual work and helped organize the building of many houses all around the globe.  The idea wasn't just to hand over a house to some lucky people, but to teach responsibility.

The Carter Center will continue past him as he has been careful to involve and train staff to take overall his functions.  His celebrity and his talents helped get it started, but Jimmy sees the real value as ongoing.

I was pleased to learn that Jimmy Carter's grandson helped reveal a secret video of Mitt Romney that was very revealing and apparently critical for the 2012 election.
Posted by John F Davidson at 3:34 PM