Bollywood Music can grow on you.

My love of Bollywood music is the result of a lot of stumbling and now I am obsessed.  Most Canadians are blissfully ignorant of it or have a stereotypical prejudice.  There is a lot that is strange by North American standards and would take a lot of time to appreciate.  We don't often pay attention to the unfamiliar, which means that part of culture that is not touted by what we regard as authoritative is to be ignored.  Too bad there is lot to enjoy in this world.  I have chosen a few links I hope will appeal to your North American tastes to give you a better feel. 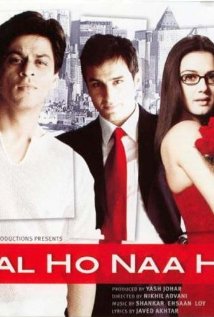 I got launched in my new interest with a song I still think is one of the best.  After some research I decided to watch "Kal Ho Naa Ho".  I was told by a library staff that it was a very sad movie, but the truth is at the first half it seemed pretty juvenile.  Then at one point the hero sings a very philosophical mellow song which caught me off guard as up to this point he had been engaged in a lot of frivolity.  They had another version of the song played towards the end which was labelled sad version and it was even with a little bit of over acting the most sad part of any movie I had ever seen.  My wife thinks it is suitable for doing yoga.

You can listen to it at http://www.shankarehsaanloy.com/ and pushing the start of the audio gallery.  The first item of music is the song.  Most people will find it very melodious and soothing.  The sad part really comes from the movie context.  The other song items are all different from one another.

Another song  from "Kal Ho Na Ho", "Kuch To Hua Hai" resonates with me, a song of two people expressing their new love, and you might assume it is for one another, but one is focused on our sad hero.  The lure with this song is most of it is set in Toronto and I recognized a lot of the sights.

I checked who wrote the music and learned it was a threesome, Shankar Ehsaan Loy.  One was actually a playback singer.  They had formed to do radio jingles until someone gave them the opportunity to do movie music back in 1997.  I have enjoyed their music in "Zindagi Na Milega Dobara" which won a well deserved album award,   "Rock On", "Kabhi Alvida Na Kehna", "Lakshya" (with one military theme very well done), "Karthik Calling Karthik", "Dil Chatha Hai" and others.  One movie that I enjoyed their music more than the movie was "Thoda Pyaar Thoda Magic" and admit the clever choreography was an important element.

In India, the hit parade tends to revolve around movie music which is actually released before the movie.  In North America musicals have lost their popularity, but music is still a driving force in India.  I respond more to music in context which is what Bollywood offers.  Of course the content of the movie makes a big difference and there is a big variety.  They are heavily influenced by Western music, but they can also utilize unique Indian rhythms and musical instruments.

A R Rahman is the  most famous Bollywood composer in North America with "Slumdog Millionaire" for which he won two Oscars.  Has scored for a number of American movies. In a list of his top hits there are many more noteworthy songs that hit his most appreciative audiences.  Some of his music I enjoyed includes "Ghaljini", "Lagaan", "Taal".  " A Peck on the Cheek",  "Bombay."  He composed music for 3 Deepa Mehta's (a prominent Canadian film maker) films, "Earth", "Fire" and  "Water".   He also wrote the music for my favorite Bollywood movie, "Swades"  He enjoys being a playback singer (in one famous movie seen singing on top of a moving train).  Admittedly I appreciated a lot of his music when I revisited it after my first listen.

Pritam Chakraborty is known for both hard and soft music.  He loves to write Punjabi songs with wild dance rhythms, but also has a reputation for soft romantic tunes.  In "Jab We Met" one of the songs from this movie, "Tum Se Hi"  was voted most romantic song.  click on https://www.youtube.com/watch?v=mt9xg0mmt28 .  Mohit Chouhan is given a lot of credit for popularizing this song.

Vishal-Shekar have a long list of movies to their credit.  One very popular infectious (to listeners not computers) video from Ra.one sung by American hip hop artist Akon.  Can't recommend the movie otherwise but have a listen http://www.youtube.com/watch?v=M4EZHGFK-1c  They have written a number of other catchy tunes.

Salim-Sulieman Merchant are two brothers.   They have produced music for a number of movies that I have enjoyed, but can't remember the music which might mean the songs didn't distract from the movie.  I thoroughly enjoyed "Iqbal"'s background music and noticed the main theme repeated in "Ashayein" another enjoyable bit of movie music.  An irony here is that in "Iqbal", the main character played by Shreyas Talpade was a deaf mute who cracked top cricket play and in "Aashayein" he played a bit role, but sang the song.   Two others I remember the music fondly were "Bachna Ae Haseeno" and "Fanaa"  Sometimes the story is more dominant and sometimes the music, but ideally they blend together.

Jatin-Lalit are another two brothers with a lot of movies to their credit, two of which are considered modern classics, "Diwale Dulhania Le Jayenge" and "Kuch Kuch Hota Hai.",  amongst my top enjoyable Bollywood movies.

If you tried a few links and weren't impressed I can only suggest the more you listen and the more in context the more likely these songs will start to grow on you.  I didn't appreciate everything the first time I heard it, but came to love a lot of Bollywood music.  If you are not turned on, your effort is appreciated.  Forgive me, but I do love this stuff.
Posted by John F Davidson at 4:07 PM