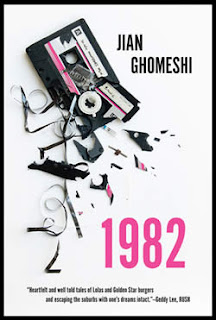 The Hamilton Public Library is always looking for ways to attract attention to its services.  As one of their fans, I like to see efforts to find more fans.  Jian Ghomeshi could help draw a crowd and fortunately he was agreeable.

As a CBC radio listener since my early twenties, in some quarters that makes me weird.  I remember a comment by a rep of a popular St Catharines radio station after confessing that I listened to the CBC which had no commercials.  She might have become defensive, but commented that I probably like to listen to the talk, not just have background.

During the passage of past decades CBC occasionally expressed a concern that their audience was aging.  They did a lot of things to counter that and one was to bring in Jian.  I am considered pretty stodgy when it comes to popular music and his enthusiasm didn't always hit me the right way.  Before going further I will go back a few years to my daughter Heather's teenage years when somehow she became enthused about Moxy Fruvous which included Jian.  Hard to avoid in my household and although my enthusiasm level never reached my daughter's level I could appreciate that they were different.  Moxy Fruvous  didn't try to overwhelm with noise, but preferred to use clever lyrics to catch attention.   Heather was a swimmer and got involved with the CANUSA games, a friendly rivalry between Hamilton, Ontario and Flint, Michigan.  Over a few years we sent her off to Michigan and hosted visitors from Michigan.  Heather managed to project her enthusiasm for Moxy Fruvous to one Flint family in particular to the point of buying records and attending concerts.

Getting back to the CBC which I still listen to almost as much as before.  Often I would switch stations when Jian came on, not wanting to hear about some unfamiliar rock group and didn't care to be enlightened.  I would sometimes switch back and catch part of a conversation.  I heard two of his more famous interviews--one to Billy Bob Thornton who was very un-co-operative to an extent that attracted international attention.  I wasn't set up for that one, but stuck with it for a bit as it was unusual in that Billy Bob was very obnoxious, complaining about Jian, amongst other things.  Jian was just trying to do his job and as a salesman I appreciated how he handled it professionally.  Another chance interview was with a Chinese dissident and which had been set up with some promos.  Very impressed that Jian would get such an exclusive as the dissident was risking a lot, but felt Jian would be perhaps the best way to get out his message.

My job situation changed and I often left work late at night when I was too tired to change the channel. Jian was re-broadcast in the evening and had lots of interesting interviews which were wider ranging than I had been assuming. I now found his interviewing fascinating beyond just the subjects.

A few months back my wife Sharon had been to an event hosted by Jian Gomeshi and had commented on how funny he was.  When the Hamilton library announced a special nite with Jian promoting his book which was selected as the choice for Hamilton Reads I thought Sharon would appreciate the event.

Jian is unique.  One thing I notice about him is that he is very introspective, but a different thing about Jian is he is able to express his thoughts.  As he said his experiences related in his book, "1982" were as an outsider.  Born in England, but coming to Canada when he was seven and then moving to a new neighbourhood a few years later he found himself as the only "ethnic."  Trying to fit in he somehow decided to model himself on David Bowie.

Years ago I worked with newspaper carriers and encountered interesting situations among immigrant children.  Most of the immigrant parents wanted their children to learn the value of work and making money (this also applied to those who already were well off).  The kids tended to be conscientious and hard working, but some of them saw life differently from their parents.  Their goals were different as they tried to fit into a new lifestyle.  I remember two successful young carriers who felt they weren't fitting in and when asked what they wanted to do when they got older one replied go back to Italy and the other go back to India.  The latter has really stuck in my mind because he became a victim of the Air India bombing.  What success I had in newspaper circulation is at least partly due to the efforts of immigrant children  who were some of my best canvassers (you know those pesky kids who sell newspaper subscriptions) as well as the most conscientious.

During his presentation Jian made a lot of interesting points.  Identifying himself as a Generation X baby he made observations about the different generations including my boomer generation that were insightful.  From his own perspective as a gadget lover he was amazed at the changes that had occurred in the last 15 years.  The impact on us is still not appreciated fully.  My own observation is that for the first time in history older people feel a strong need to seek advice from younger people.

One example he gave was of the effort made in his youth to buy a record album of whatever his desired music was at the time.  He had to walk, take a bus and then a subway and sort through the shelves at Sam the Record Man and then reverse his steps and finally get to listen to his music.  Jian implies that the music of today might not be as valued so personally when the effort to obtain it and file it with thousands of other songs can be done by pushing a few buttons.

Another example he gave was trying to maintain some dignity in making a very sensitive phone call.  There was no email, social media,  mobile phones or even wireless phones and in fact he had only access to a phone at home with a chord that restricted his privacy.  The phone chords were all curled up which Jian felt was useful for dealing with the tension.  Fortunately there was no call display so he was able to hang up when the girl's mother picked up the phone instead of his target.

As an Iranian he touched on something that also had a personal effect on me.  When the movie "Not with My Daughter" came out my sister had married a Muslim from Morocco who has had a positive impact on my life.  The movie's effect on Canadians and Americans was that all Iranians and all Muslims could not be trusted and should be feared.  Jian found himself associated with terrorists and has worked to bring attention that a lot of good things came out of Iran.  He put a few jabs at a popular movie, "Argo" that I sympathize with having heard Jimmy Carter giving more credit to Canadians and Juan Cole's remarks that Iran was not set in a fair context.

Two other things I would like to say about Jian if you will just bear with me a bit more.  He is funny.  It helps that he doesn't mind being the butt of his own jokes.

For my last point at the end I bought his book and got in line for an autograph.  Feeling kind of guilty that there was a long line behind me and I really didn't know what to say when my turn finally came.  I just requested that instead of addressing to anybody he just add Hamilton and the date.  He wasn't about to brush us off and get moving down the line so he could head back home; he actually stopped us and thanked Sharon and me for coming, shook our hands and let us back away at our own pace before turning his attention to the next autograph seeker.  He is a NICE guy and I reserve caps for special people.