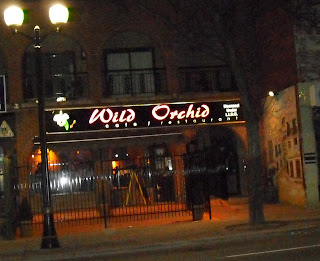 Every second Friday of each month the art crawl is an event I try to take in.  My little story is one of thousands.  There are now new restaurants and new galleries and more musicians than ever.  It is not possible to see everything.  The crowds have been increasing especially when the weather is good as it was for this August night.

A confession.  I took my camera and a few of the shots shown were taken by me at the time, but really a lot of the time I just flowed with the crowd and later went back or dug up photos.  A lot of enjoyment was felt without a camera.

First we decided that the annual trip to the Wild Orchid for their patio Sangria and Mussels deal was overdue.  Good any time during the summer,and very busy during the art crawl.  We thought we arrived early, but the crowds had already started.  Fabulous value.  Just back from New Zealand we appreciated the green lipped mussels and enjoyed some of their Portuguese specialities. 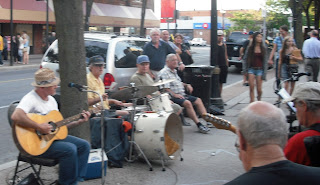 Not too far from there is a marketplace for crafts and I had a bite out of a fruit popsicle from Rudy's.  A tradition has developed in that part of James St where some musicians get together with a jam session and Art Crawl visitors walk between them (or take a moment or two to enjoy). 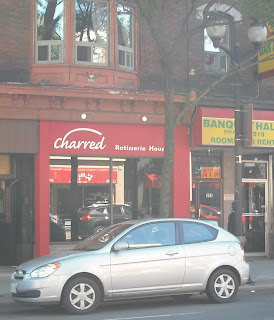 I mentioned new restaurants popping up and Charred Rotisserie gave everyone a preview as they weren't quite ready to open.   There is a connection with two other restaurants--Jack and Lois and just a few doors away   McCartney and Son, each offering something unique.  They were giving out free samples which I think will give them a quick startup.


More than a year ago I stumbled on two musicians from Ecuador that are part of a group called Tribu.  I was so taken with their music (I have come to love Andean pipe music) that I had gone home and asked my wife if it would be ok to add to my Father's Day presents and went back to buy a CD which I have enjoyed many times since.  They showed up drawing a crowd. 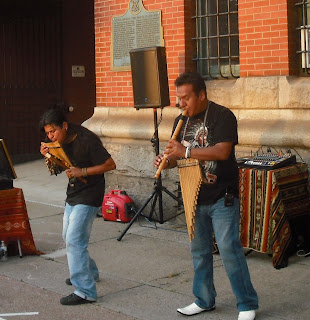 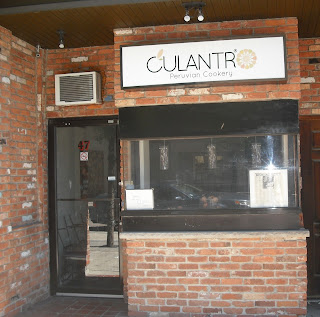 My daughter had recommended a new Peruvian restaurant downtown, but they were only open Monday to Friday during business hours.  I followed them on Facebook and learned they were extending their hours for Art Crawl.  they only have seats for 22, but I was too full for a sit down meal so I ordered one of their empanadas.  While waiting I got talking to the chef, Juan who asked me if this was my first visit and when I admitted it he gave me some small snacks and a drink and explained their uniquesness.  The empanada was great and I hope they extend their hours more often.

Another restaurant back on James Street, Ventura had been renovating and unvielled the results.  They now have windows that open up towards the street.  They have built up a good reputation as a top Portuguese restaurant over several years and now have noticed the Art Crawl and are becoming more involved. 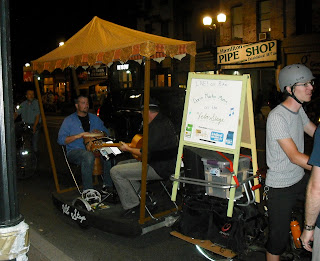 Across the street while my wife and daughter and friends were checking out another craft store I watched two mobile musicians.  They were carted around by a bicycle and stopped wherever they could find a parking spot, but performing while traveling. 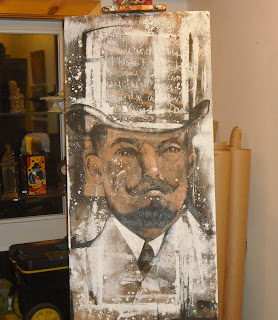 I did visit a few galleries and craft shops, but went up a few steps to visit Lester Coloma who amongst other things likes to do outdoor murals (one is below).  One of the advantages of participating in the art crawls is that you get to talk to artists who are quite willing to explain their thinking and technique behind the art.  Lester is a good example.  I am looking forward to a mural he has been asked to do for next month's Supercrawl.

I will be featuring Dave Gruggen Photography in my next newsletter and was pleased when he relocated his studio to James St North.  He does aerial photography and has been given a contract to show the progress made on the new stadium replacing Ivor Wynne stadium and you can follow the progress as well.  He always has some impressive large photos of people you might recognize.

Another art show I would like to mention was the last one we visited at the You Me Gallery which happens to be only a few blocks from our home.  They had large photos of families, many from my North End immigrant neighbours depicting family meals.  There was writing on the walls describing their feelings of being part of Hamilton, but also enjoying their different traditions. 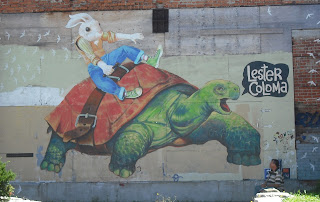 The Art Crawl attracts people from all over and I believe gives something for Hamilton and the North End to be proud of.  The crowds must be spending some money and businesses are recognizing this is a good place to put their money.  Each one is unique from previous ones.