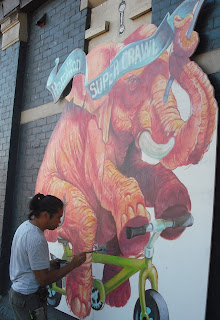 My story is not meant to be comprehensive as it is only one of over 100,000 versions.  As the Supercrawl has evolved it has built on its own success and grown each year.  It is now drawing people not only from Hamilton, but Toronto and Buffalo and parts in between and beyond.

This year there were four main stages plus lots of vendors, galleries, buskers, causes.  New restaurants have opened and older restaurants have renovated.  More than a dozen food trucks added to the variety of food available.  All this meant no one could see, hear, or eat everything and choices had to be made.

This first photo is of Lester Coloma adding a few touches to his mural.  He has done a number of murals around Ontario and beyond.  I thought this one could easily be the logo for the Supercrawl.  I have shown a number of his murals in previous blogs.

Friday night  on my way home to get rested for the next day, saw a French Canadian group  and decided to stay and watch  Les Trois Accords, from Drummondville.  I had already forgone an early bedtime and decided  to check their website when I did get home. Language can open doors.  Their music did have a lot of melody, but I understand the words were too clever for a unilingual audience. Fortunately they were able to draw a few francophones as well as some appreciative anglophones.

Saturday morning on our weekly trip to the Farmer's Market and the library we watched as the street was set up and we could appreciate it would be bigger than ever.  More areas were cordoned off for more vendors and entertainment.

At the booth for the Hemophiliac Society I bought a Polish sausage which was the best value of the day and for a good cause. 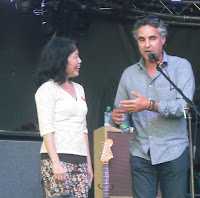 One of the first shows I saw on Saturday was Hachey Mouthpeace with the Brass Ensemble of the Hamilton Philharmonic Orchestra.  I was unprepared for the noises coming from Hachey which amounted to a percussion section.   You always think of classical musicians as being pretty serious, but this was very much a fun blend for everyone.

At the CasiNO booth  we signed a petition and pinned on buttons. The merchants that support Supercrawl feel a downtown casino would threaten their livelihoods.  Having lived in the North End for over 30 years I have been very pleased how the street has gradually improved and is now attracting people looking for art, for music, for restaurants and more.  Hamilton, especially the downtown and north end, after years of neglect is coming into its own.  A casino would have to compete against other casinos in more touristy towns and would want to eliminate the competition provided by Flamboro Downs.  I have a vested interest in the track, but anyone can appreciate that Flamboro Downs already contributes a lot of revenue directly to Hamilton plus a lot of jobs in agriculture. Putting them out of business like the Ontario government has done to tracks in Sarnia and Windsor in exchange for a casino is a foolish gamble with essentially no new benefits.

I listen to Mary Ito  Saturday and Sunday mornings on Fresh Air before I get out of bed.  Lots of things follow from that.  This Saturday she mentioned she would be at the Supercrawl introducing some music from Said the Whale.

A little later I did make it over to get my photo of Mary with Bruce Croxen and stayed to watch Said the Whale.  They attracted a big crowd and played to the audience.  I was fortunate to win a T shirt thrown into the crowd. 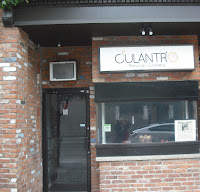 Time to eat and we made it to Culantro, the new Peruvian restaurant that I had heard about from my daughter Heather and read a number of favorable reviews.  It was just far enough off James Street that not too many out-of-towners had discovered it.  Nonetheless it soon packed up.  We had a fairly quick meal, bearing in mind that their menu needs time to properly prepare.  We learned that the cook/owner is a neighbour who lives on the same street about two blocks away from us.  We also met an old friend from the Farmers Market who has relocated, just in time to stock up on both his tea and soap. 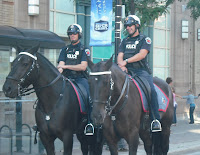 With over 100,000 visitors keeping things under control can be difficult.  The police were in various formats.  On foot, on bicycles and on horse back.  For the most part they were part of the crowd, helping people find what they were looking for, but were reassuring.  No problems to report. 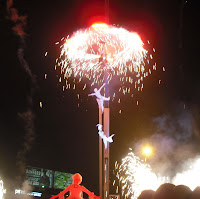 The next big attraction for us was Orange Circus that we had seen last year.  Word had gotten out, but we arrived an hour ahead of time and got a fairly good spot to stand and there discovered a co-worker of Sharon's from St Catharines who had brought his wife, brother and sister in law.  Then we met our neighbour from two doors away. Orange Circus had expanded from last year adding in trampolines, a bagpiper and various actors with their trademark fire background.  The fire came sudden and really added something to the show. 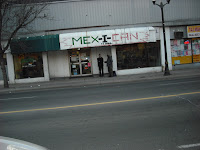 After that show we decided to wait in line for Mex-i-Can, a favorite after many visits.  Like most of the other restaurants on James Street they really packed them in.  I would like to have visited more restaurants, but my stomach can only handle so much and the lineups were long at all of them including several food trucks.

We decided to watch the headliner, Passion Pit the group that helped attract the big crowd and the last act of Supercrawl.  Pretty difficult to get very close.  They filled up the street for about two blocks, plus a side street, plus some on rooftops.  Their fans were very happy. 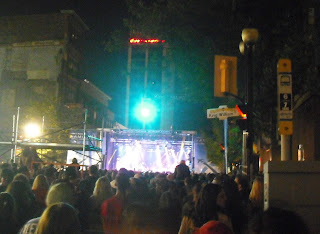 Hopefully next year the organizers will build on their well earned success.  To really enjoy it you have to plan ahead and then be prepared to be spontaneous.   There is more than big name acts. Although some acts are well established and attracted their own fans, there were lots of lesser known acts on stage to reach a new audience. There are also buskers that are often very enjoyable such as cellist Geoff Ball and harpist Rachel Nolan pictured below. 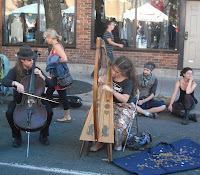 This year a hidden traffic problem was a bridge being replaced on Bay Street that runs parallel to James.  After the bridge is completed for next year it might open up some more possibilities, at least for traffic flow.  This year the Supercrawl expanded by putting a stage at Pier 8 which is on Hamilton Harbour in a beautiful setting.  Unfortunately I didn't make it because it was too far away and I had to choose between events.  There is a big gap between Barton Street and Pier 8.  The organizers did offer a shuttle bus.  In that gap are a few interesting restaurants including the Harbour Diner that had been featured on television, but the area is mostly residential.  Inevitably visitors will have to choose what they most want to see.

A wonderful tiring weekend.  Proud to be part of it.  Do you want to add in your own version?  Next year it will be better than ever.  Hope to see more of you there!
Posted by John F Davidson at 3:13 PM