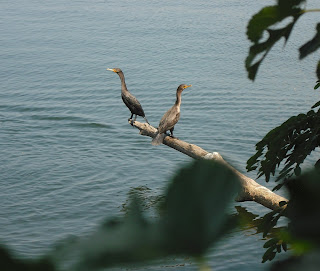 When you look at the numbers they don't seem right.  Barack Obama got elected ok winning both the popular vote and the electoral college tally.  However, his hands are effectively tied by some hardball opposition who are able to take advantage of some quirks of American politics.

In American politics they work on a two year cycle with two political parties that make all decisions. Both parties seem to be in perpetual campaign mode.  The electorate gets most pumped up for the presidential elections held every four years realizing that the president holds significant power with the commander in chief status, the veto and the bully pulpit.  The American Constitution is set up as a delicate balance of power that can be manipulated.

The Senate is intended to be distorted.  During the Constitution negotiations small states were fearful of having big states (particularly big northern anti slave states) dictate policies to them and thus the smallest states have the same power as the biggest states.  In the United States it turns out that smaller states very often are critical in policy procedures and must be catered to.  Further complicating are procedures that allow a minority party to block efforts of the majority.  The minority Republicans are able to stop some issues coming to a vote.  They must confirm high level nominations for executive power.  They have used this power and then are able to boast that the majority policies don't work.  In reality it is very difficult to make significant policy changes.  The Senate is supposed to be the chamber of sober thought and that is ensured by longer terms (6 years) and staggering so that there is only a turnover of 1/3 each election.   In Canada little Prince Edward Island holds 4 seats regardless of population and Quebec fearing assimilation by anglophones campaigns for a minimal percentage of seats.

The House of Representatives is supposed to represent popular sentiment and are elected every two years.  Ironically the current House is controlled by the party that received fewer votes.  How is that possible in a chamber that supposedly reflects the wishes of the majority.  Every ten years Americans hold a census and unlike in Canada, the necessary adjustments to electoral boundaries are decided by the party in power for that particular state.  Although 2012 resulted in a major decision by the voters, it turns out that the 2010 election was more decisive including at the state level.

Going back to the previous 2008 election Americans decided for the first time to give a chance for a black presidential candidate.  The voters also gave majority status for the Democrats in both the Senate and the House of Representatives.  As any new party in power the winners embarked on their agenda and encountered some success.  But it wasn't too long before the minority was able exert major obstacles to the supposed governing power.  The Senate power structure was undetermined while one seat was subject to court procedures before being decided and another was turned around after the death of a Senator.

When 2010 came around the Republicans were able to rouse their supporters in sufficient numbers to not only control the House of Representatives, but gain some leverage in the Senate.  More importantly they gained some very big leverage in state governments.  At the state level they were in a position to change boundaries for the House of Representatives and in many cases adjust voting rules to favour their party..

How did this happen?  In other blogs I have written about the disproportionate power of money, but it must also be acknowledged that big business special interest money is focused.  They do not need to get everyone on their side, not even 50%, but just those areas that have leverage.  From their positions of power they helped draw electoral boundary lines that allowed fewer Republican votes to result in a very resistant House of Representatives.

Again  how did supposed Democrat leaning people let this happen?  They were the big losers.  Some of them were upset that Obama didn't push harder for their agenda.  Others thought things were under control and still others didn't pay attention.

The Democrats were hurt almost irreparably by the 2010 election results.  Most of what they really want to accomplish is stymied and anything they accomplish is whittled down and delayed.  This can drag on through the next election and beyond.  Big money certainly has an agenda that is not in sync with most voters.

Obama and anyone else in his position has to contend with the opposition who use whatever rules they can and he has to deal with big money, including his own big money without which his power is jeopardized.  The huge government bureaucracy has its own agenda that is somewhat hidden.  The president knows and lives with many factors unknown to the general public.  It is easy to judge someone, but hard to factor in the circumstances.

Progress only happens with actual deeds.   Compromise has become unacceptable to some and they have tools that can prevent or at least diminish efforts to go forward.  They feel their way is the only way and even considering the preferences of the majority is strongly resisted.  It could be that hate is their fuel and if so I would like to think that love could help counteract that.

Obama knows he cannot exercise power without support.  The big money they can get is very necessary to get voter support so he finds himself watering down his ideals.  The opposition is bulldog determined to make him look bad.  They know how to leverage power.

Although fiscal conservatism and social conservatism have much in common it is far from a perfect fit.  The Republicans are very clever at aligning the two factions, but in the end it may be their undoing.

The problem is to get the power.  A compromise is one way of edging closer to what you really want. Partly it shows you are willing to work with others, but also a compromise gives a demonstration of the goodness of your idea.  Refusing to compromise has its advantages as well.  Republicans have to satisfy the voting members of their own party who are concerned about their ideology.  Some hope that by refusing to help Obama the voters will blame him for the resulting problems.

When faced with two choices as most Americans are every two years you can get upset that you don't fully agree with either choice and walk away.  It does make a statement, but it doesn't move anything concrete.  It is true you are often forced to choose the lesser of two evils, but from a distance it seems like there is a significant difference.  Do you want to surrender your options or widen your options. That is the real choice.  A rational voter is the great enemy of emotional manipulation.

Liberals can be very negative on Obama for not fulfilling their agenda.  They need to realize their agenda will most likely be discarded if Obama's team gets beaten.   How the Republicans are able to obstruct anything remotely progressive is frightening, but part of it is due to apathy.  Their opposition supporters understand the importance of voting.
Posted by John F Davidson at 1:11 PM