Living on the corner during a Canadian winter

Over half my life has been spent living on a corner house, or more critically well over half of my shoveling life has been.

As a youngster I lived in my grandfather's house which was a double lot on a corner used partly for a coal business.  My father had moved back home after his father had a stroke when I was about two years old.  Since I was about 8 years old (I was the oldest son) I got to shovel the sidewalk.  Pretty daunting for an 8 year old, but with no permanent harm.  That property has since been taken over by the General Motors Place in Oshawa. 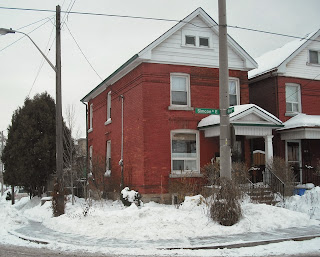 After about the age of 16 my family moved to Haliburton where I spent my last two years of high school before going to the University of Guelph.  Eventually got a job and lived in an apartment and boarding houses for a few years, then finally bought my first house on a dead end street.  Later moved to another house and then rented for two or three years.  Finally I moved to my current house and it was  a family deal that couldn't be resisted, but it was on a corner.

Corner houses do have advantages. I moved into my second corner house during the summer and put more emphasis on those advantages.  It is nice to have extra parking spots for your visitors.  Your location is easier to describe.  However when snow starts to fall it is hard to maintain parking spots and you now have a legal responsibility to clear more than twice the sidewalk space as most of your neighbours.  Most just have to worry about the front of the house whereas us corner lot owners also have to worry about the length.

There are advantages to all that extra shoveling.  Fitness has not always been one of my strengths and shovelling snow did provide a high percentage of my exercise for many years.  I am conscious that fitness is something needed to enjoy life more and in fact to shovel snow.  Going out into the cold with some heavy shoveling is one immediate cause of heart attacks.

Maybe it builds character.  Being at an intersection means I get lots of opportunities to help push cars through to the other side.  Jean Chretien, once said something about Canadians in that in the winter we need to work together to get our cars going and one way is to rock back and forth until we find traction and persuading a few pushers to help.

Since I started writing this between shovel sessions I also walked downtown and noticed a few of my corner house colleagues had set a good example.  They had punched out a pedestrian walkway through to the street.  I have to admit that that pricked my conscience as I also noticed those who didn't  make a cut through the snow pile made it much more difficult to get to the other side.

Credit blogging with making me think a little deeper on the subject.
Posted by John F Davidson at 1:47 PM