BOOKS THAT IMPACTED ME IN 2013

Lists of best books are encouragements to find that elusive one you can't put down.  Guilty. Hopefully my list will help you find an enjoyable or satisfying couple of hours.  I will be checking other lists and taking advice from different sources.  Read over 75 books and although you might enjoy some of the unlisted ones and many are certainly worthy, the listed ones are those that impacted me the most and that I would like to recommend.

"The Righteous Mind Why Good People are Divided by Politics and Religion" by Jonathan Haidt is the one I would most recommend. He explains how people develop strong convictions.  You will find yourself looking at your own convictions and hopefully understanding if not respecting other people's strongly held convictions.  Humans tend to fit themselves into categories.  http://www.therealjohndavidson.com/2013/02/the-righteous-mind.html


"The Innovator's Dilemma" by Clayton Christensen came up in a business context, but has a message for all of us trying to cope in an ever changing world.  Like most people I just assumed that any company that got overtaken by new products was just inadequate, but there is often much more to it.  http://www.therealjohndavidson.com/2013/03/the-innovators-dilemma.html

"The Signal and the Noise" by Nate Silver was talked about it seemed everywhere.  Our lives seem directed by Big Brother sometimes, but in reality there is so much information out there that it takes careful analysis to make sense of it.  Nate has some really good insights.   http://www.therealjohndavidson.com/2013/05/the-signal-and-noise.html

"To Sell is Human" by Daniel Pink is a practical book for anyone.  Most outsiders look down upon salespeople thinking they are only doing it because they couldn't get a "real" job.  The joke is that almost everyone is a sales person (and that includes you) and that sales skills are often the tools for business and personal success.  He has a lot of insights with a strong point of view on ethics (it is really in your best interest).  http://www.therealjohndavidson.com/2013/06/to-sell-is-human-and-we-all-do-it.html

"The Power of Why"  I learned about from a Peter Mansbridge interview with author Amanda Lang.  It really is based on that juvenile smart alecky questioning many parents and teachers find so annoying, but is really the basis for creativity.  http://www.therealjohndavidson.com/2013/04/the-power-of-why.html


I watched Sheena Iyenger on a panel with Fareed Zakaria  focussed on some big political choices. Fareed realized that choices can be difficult and had invited Iyenger to discuss some of the process. We make literally thousands of choices every day, most of which are almost automatic.  "The Art of Choosing"  concludes that the art comes in by deciding which decisions are important enough to be consciously decided. http://www.therealjohndavidson.com/2013/10/the-art-of-choosing-as-seen-by-sheena.html


"Steve Jobs" by Walter Isaccson is about a very complex person who had a strong impact on the world and on me personally.   I learned on IBM compatible computers, but when a job forced me to use an Apple, I was surprised at how much easier it was to figure out.  Steve Jobs is one of the reasons in his perfectionist drive and his philosophy.  But he wasn't such a nice guy to most people he dealt with.  A most interesting life filled with intense compulsions.

"Lawrence in Arabia" by Scott Anderson was read in December and I watched the movie from 1964. He was a very enigmatic figure who lived in the midst of historical forces.  Scott Anderson tries to put his life in the context of Middle East dynamics that we are living with today.  http://www.therealjohndavidson.com/2013/12/lawrence-in-arabia.html

I read  "The Last Crossing" and  "A Good Man"  both by Guy Vanderhaege, a favorite writer.

"And the Mountains Echoed" by Khaled Hosseini as I had enjoyed his two earlier books.

Two books recommended by Vijayakumar Mk Nair " The Summer of the Bear"  and "The Garden of Evening Mists" were richly enjoyed.

"On Sal Mal Lane" by Ru Freeman is deceptive in that it encompasses some serious recent history but by focusing on children in a middle class Sri Lanka neighbourhood interacting with parents and each other.  Representing Tamils, Sinhalas and Burghers that divide further with religion.  There is no real hate in this group, but there is ethnic/classic snobbery.  One connection is through a piano teacher. The first 2/3 of the book is concerned with typical juvenile inter actions, but it stealthily creeps up to the major conflict.

Robert J Sawyer's "Red Planet Blues" is essentially a murder mystery set in Mars, allowing Robert Sawyer to expound on some of his scientific and philosophical views which add to the entertainment and perhaps make you think a little.  I am glad I re-expanded my reading to include science fiction which often is profound.   To read about my conversion click on  http://www.therealjohndavidson.com/2011/09/conversion-can-sneak-up-on-you-too.html

From my trip to New Zealand  I tried to soak up a little local literature including the classic "The Bone People" by Keri Hulme.  A more current one was  "The 10 PM Question" by Kate De Goldi.  I have gotten interested in two other Kiwi writers which looking forward to reading in 2014.

"The Dinner" by Herman Koch was about a complex family problem peeled off layer by layer at a dinner between family members set in the Netherlands.

"Snowwhite Must Die"  by Nele Neuhaus from Germany demonstrates mystery lovers have a wider world to choose from.

Henning Mankell has become another favorite.  I read two of his books,  "The Shadow Girls" and "A Treacherous Paradise."  His writing runs from Scandinavia and Africa.  Recently he was on one of the boats trying to get some needed goods to the Palestinians.

Nelson De Mille  usually turns out a book every 18 months or soon, but this time re-wrote  "The Quest" set mostly in Ethiopia.  You can read a personal connection at:  http://www.therealjohndavidson.com/2012/05/tribute-to-nelson-demille-real-writer-i.html

I discovered Jane Urquhart within the last two years and this year enjoyed "The Underpainter" and   "Away." 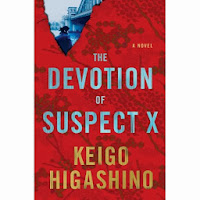 "The Devotion of Suspect X" by  Keigo Higashino was the most inventive mystery  I recall and then was able to read "Salvation of a Saint" that was also very enjoyable.  In both cases the mystery solver does not appear till well into the novel.

"The Orenda" by Joseph Boylen received a lot of publicity as a  "Heather's Pick" who pointed out not short listed to the Giller award, but in her opinion better.  I can't say as I didn't get a chance to read the ones that did, but it was definitely one of the best fiction books for me.  Joseph Boylen presented the native and priest viewpoints.

I fear I have done a terrible disservice to authors who provoked my thinking and stirred my pleasure over the past twelve months, but I couldn't squeeze everyone in.  This is just one list that might help guide some readers to some joy, but there are a lot of other joys awaiting you.