"To Sell is Human" and We all do it 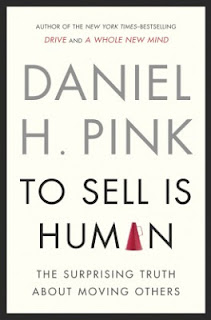 Selling is one profession that has very low public esteem.  For some it reeks of poor ethics, for others of ostentatious behaviour and for others is just too difficult.  Daniel Pink did not consider himself a salesman and his general thinking was that it is a job with declining prospects.  However a closer look revealed that selling is more common and important than ever.  Daniel realized that he himself is in sales.  He added a category he calls "non sales selling" and chances are many of you are in the same category.

"Non-sales selling" involves almost everyone.  There are a lot of worthy ideas that don't get executed because no one has been able to sell the idea.  Each day however people like yourself do sell their ideas and get things done that benefit many others.  And even more common, many people fail to sell their worthy ideas.

Selling has changed, not only our understanding, but conditions. Before more modern times the salesman had the knowledge and the buyer was dependent on that knowledge.  Now the tables have turned and the buyer often knows more than the seller.

"Always Be Closing" was a phrase common to selling and really offended a lot of people as presented in the movie "Glengarry Ross".  Daniel updates the ABC acronym to "attunement, buoyancy and clarity."

Attunement simply means understanding your customer or prospect.  Buoyancy requires you to deal with rejection (the real reason people give up selling).  Clarity means identifying the real problem or opportunity.

Sales techniques suggested by Daniel are less manipulative, but practical.  Questioning and listening are key.  A question I also found very effective at opening conversations at trade shows is "Where are you (folks) from?"  It is more important to understand the customer than to trap them into an unwise purchase. Pink suggests websites where you can learn aspects of selling through interaction.

A change in attitude is to see yourself as a servant.  It is not satisfying to feel you have to put one over on a customer in order to make a living.  It is also not effective over the long run.  It is more satisfying to realize you are really meeting a need.

Daniel has a short section on commissions.  I have spent a good hunk of my life selling on commission and can appreciate the benefits, but I have also seen some of the bad aspects.  Commissions can encourage unhealthy competition and unethical manipulation.  I remember a contest where we were allowed to bend all the rules and in the end it created a lot of bad feelings.  I also remember another contest where there were two components--an individual goal and a team goal.  If you achieved both goals you got a bigger prize but as long as you achieved the team goal everyone got something. The advantage here was that we did achieve a high goal and had a lot more collaboration.

A few years back I stumbled on "Drive,"  another book by Daniel and bought it with a birthday gift card.   I originally read Daniel Pink because of his thoughts on motivation and he demonstrates that there is more to sales, business and life than just money.  I highly recommend that book as well.

To end I would like to borrow a quote used by Daniel at the beginning of 'To Sell is Human".  He borrowed it from Arthur Miller  in the Death of a Salesman with a comment aimed at Willy Loman, "The only thing you got in this world is what you can sell.  And the funny thing is, you're a salesman and you don't know that ."  By now you should realize you are all sales people.

To keep up to date with a very innovative thinker visit his website at http://www.danpink.com/
Posted by John F Davidson at 5:42 PM