PETER' IS STILL SWINGING AT 90 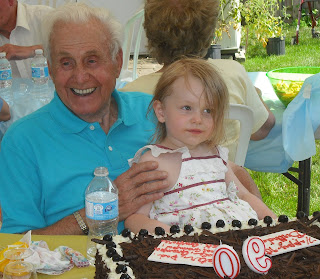 Peter, my wife's stepfather has been married to my mother in law for over 15 years.  He still loves swinging the golf club.  Most of all he loves people, like very few people I have met.

At his recent 90th birthday celebration were a lot of relatives, but also a lot of friends.  Friends he knew from work and golfing.  One example of how he generates friends is that despite being very Italian, he became golfing buddies with my late father- in- law's (a wonderful man himself) Ukrainian relatives.   Peter gets invited to a Ukrainian golf tournament each year and loves the whole experience. 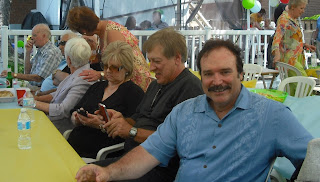 Through Peter I have gotten to know his son Sam,  daughter in law Lisa and grandchildren Nicole and Greg and great grand-daughter Chloe who have all enriched my life.  Sam who helped organize this get together made a little speech that reinforced my own opinion of Peter.  Peter was always there to talk to his young son, Sam.  Peter didn't behave like a lot of fathers, he asked his son questions and wanted to know what his concerns were.  When Sam was trying to make a decision, Peter would ask what the other person was thinking.  Then how would the other person respond to what Sam might decide.  Then how would Sam respond to that.  Going through that process helped Sam make better decisions.

Peter has many conversations like that.  He doesn't pretend to understand the circumstances in anyone's life, so he asks a few questions.  At some point he will relate his own experiences in a similar situation. 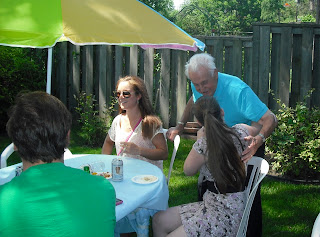 I remember one experience when I was trying to prove a product I was selling could be used on a golf course.  My experiment didn't go quite as planned.  I was trying to prove my product could clean up oil from grass.  I poured oil on grass growing between a sidewalk crack.  I got distracted and it was longer than intended before I poured my solution on it.  So I tried it again this time with less time between.  Both efforts seemed to fail and I gave up.  A few weeks later I noticed that grass was growing on my second effort but not my first.  I couldn't figure out what it meant, until Peter questioned me, and soon he analyzed  with only a very slight hesitation--oil kills grass, however if you are quick enough you can salvage the roots to regenerate.   On a golf course there would be no concrete to restrict the spread of roots.

With Peter I appreciate more the value of family.   He expressed his concern that we all put in so much effort for his birthday, but we tried to assure him we just wanted to celebrate with him.   Watching him with family and friends is awe inspiring.  A regular part of Peter's life is keeping in touch with his friends and relatives.

Photos:  At the top Peter at his happiest with family, this time great grand daughter Chloe.

Sam, Peter's son facing the camera with some of the guests behind him.

Peter got around to visiting his guests of all ages.
Posted by John F Davidson at 3:11 PM