Anyone who successfully writes about science to the non scientific public is subject to criticism, some no doubt valid.  However the average person without a scientific perspective, needs to understand that most of what we think we know is really superficial.  Jared Diamond cuts through a few layers of standard thinking without claiming to provide all the answers.  I have read four of Jared Diamond's books and to a significant degree they all have deepened my understanding of the world. 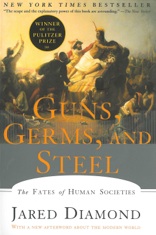 Carl Sagan suffered a lot of criticism for his popularizing efforts, but also was able to penetrate the public's disregard for science.  For some he opened the door to a more detailed study of science and how science impacts public issues.  There is room for detailed studies, but honestly they don't have the impact with the public if they cannot be explained.  It is a similar skill to putting an 800 page book into a two hour movie--something gets left out and something is subject to distortion.  More on Carl at: http://www.therealjohndavidson.com/2012/10/carl-sagan-and-our-future.html

What surprises me is that is that at bottom Jared is an ornithologist.  That preoccupation prompted him to visit New Guinea where there are many interesting birds to study.  New Guinea is unique in other ways.  It has the densest concentration of languages found anywhere in the world.  It has many variations in environment.

Over a period of 50 years Jared has come to learn many unexpected things, appreciate different viewpoints and to analyze what this means to him personally and the world he comes from.

The one that had the most impact for me was "Guns, Germs and Steel."  I had seen a portion of the documentary on television.  The basic premise was to explain why "civilization" developed the way it did.  Modern people seem to feel that it was all decided by superior races of man.  It has always bothered me that in our egocentric world we all think whatever we are is the centre of the universe and everything else is a poor imitation at best.

Jared with a lot of research countered that there were geographical bands of edible food and domesticable animals that made it easier for these advantages to spread.  Germs played a role in that because civilization started when food could be produced and stored more efficiently it allowed cramped conditions which fostered diseases.  Urban dwellers developed immunities after a few generations, but spread these diseases when they explored other parts of the world.  Smallpox and measles killed off a large portion of resisting natives of other areas.

Steel developed along logical lines, but allowed those who mastered it to have harder, sharper weapons and more effective armour.

The bottom line was that civilization had much more to do with geographical circumstances than the superiority of any one race.

I blogged earlier about "Why Nations Fail" written by Darren Acemoglu and James A Robinson that explicitly  criticized Jared for his geographic theory about where civilizations formed.   In this new book the authors delved more deeply into social and political factors that played an important role in the ups and downs of civilization.  However I don't feel they contradicted the role of geographical factors, but uncovered other factors that were often critical.  You can read my blog at  http://www.therealjohndavidson.com/2012/11/why-nations-fail.html

"The Third Chimpanzee" was actually written a few years before and was an earlier version of many of the same themes.  Humans and chimpanzees have a closer genetic match than chimpanzees do with gorillas.

"Collapse" was written to help explain why different societies collapsed.    He pointed out ecological factors..  The one phenomenon that was most common was the loss of cheap energy, often the result of ignorance or short sighted thinking.  The most unifying example seemed to be wood from trees.  Wood was not only critical for building, but also when burning an important source of energy.

"The World Until Yesterday"  The contrast between New Guinea and America prompted him to make many observations that he extended to include other traditional societies and modern Westernized nations.  In many ways it would seem desirable to advance from simple traditional band of humans to our modern complex states, but Jared would argue that perhaps we could still learn from our "simpler" fellow humans. 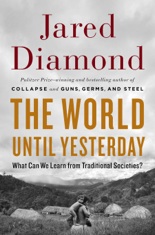 By no means does he suggests that everything is superior in simpler societies.  One perspective that uncovers some basic problems is how we deal with strangers.  Primitive societies, for good reasons are fearful of strangers, but bigger more sophisticated societies must overcome this or we might be at each other's throats more commonly.  On the other hand Jared found that some primitive societies are very good at mediating.

Primitive societies have personal conflicts but their focus is different in many cases.  Their focus is on restoring relationships rather than just restoring property.  A key difference between primitive and modern societies is in entertainment.  Primitive people rely a lot more on talking to one another than on the many modern forms of entertainment.

While in Borneo, Jared learned many different dialects as did those he dealt with.  He noticed  this seemed to boost mental capacities and encouraged his children in this regard.

For some of my fellow readers Jared may seem superficial and they can move on to more scientific explanations.  A few of my readers might already come from that direction and I cannot quarrel with their observations, but I think for the majority of my readers people like Jared Diamond and the late Carl Sagan help us to realize that there is more to the world than previous mainstream assumptions. To help relieve the world of its ignorance we need more popular explainers of deep science concerns.  True scientific understanding is elusive, but the pursuit should be respected and encouraged.
Posted by John F Davidson at 11:49 AM