MY CAREER AS A SPORTS VOLUNTEER 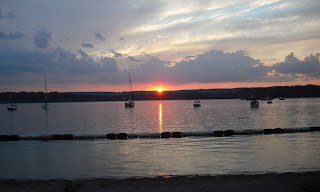 The shoe is now on the other foot.  I actually sell ads to and for volunteer sports organizations.  To continue, these amateur minor sports groups have to attract members and cash.  Parents these days like the idea of their children participating in sports, but too many see it as a babysitting service, perhaps better than having their kids play video games or watch tv.

I wasn't a lot different.  My daughter, Heather took swimming lessons partly because we didn't want her to drown at family gatherings around a swimming pool.  She loved it and somehow she was advised to get into competitive swimming.  I can barely swim the width of a backyard pool so this was not something I was excited about.

Swim clubs always need volunteers and sometimes they make a plea that is hard to ignore.  I got roped into being a timer at a novice swim meet when they needed a few more to keep the meet going. Ideally they want more than one timer per lane, plus a chief timer who can be a backup or a verifier for the winner.  I volunteered or was coerced  for a few more meets and then something happened I can't explain.  I became curious and learned that one of our members had been a starter at the Olympics.  He had started out as a volunteer similar to myself.

I was made aware of steps that could be taken to upgrade both my skills and accreditation.  There were formal clinics and on the job training.  I got to know many of the volunteers.  I got more involved with meets not only at home (where you can feel especially guilty), but also away.  I went from a time keeper to a chief time keeper. Then decided to get involved in other aspects of running a swim meet

One story.  While a time keeper I met a woman whose daughter took psychology at university where the professor gave each student a rat for experiments, but also required them to keep the rats afterwards.  This mother as might be typical was not too keen on that idea, but ended up as the caretaker.

Met all sorts of interesting people.  One family owned a major bakery that supplied pizza to a grocery chain.  Teachers, lawyers, factory workers, office staff and the father of a world class swimmer.

The height of my career was when a friendly international meet (including Europeans) was held in my hometown and I was the strokes and turns judge.  This was especially difficult for me as the strokes were only understood on an academic basis, but I knew spectators were carefully watching to make sure no cheating was allowed.   No riots resulted so the judging (by the spectators) must have been acceptable.  It might sound terrible, but I was proud that I disqualified one swimmer, otherwise I would have been seen as allowing too many others to cheat.

We decided one day that my son, Michael might enjoy soccer after we had seen a notice where his older sister went to school.  I am not sure his enthusiasm was all that high at the beginning.  Not sure which came first, but at one point I was involved in coaching something of which I had almost no experience (coaching or soccer).  One year after everything seemed to be going smoothly we got a notice that the soccer club might have to disband because not enough people showed up for a meeting.  I attended the next meeting to decide the fate of the club and when they pleaded for executive volunteers finally caved in for what I thought would be the easiest job--getting field permits.  It really was an easy job but introduced me to city bureaucracy.  I really wasn't required to go to all the board meetings, but out of habit did anyway and helped make a few decisions and execute a few necessary chores along the way

We ended up driving some kids who like ourselves didn't live near the facility.  Two were brothers from Nicaragua.  The younger one should really have played in a younger age group, but was so good that for convenience we let him play with the older boys.  I remember picking them up after they had spent a hard day picking vegetables to contribute to the family income.


Another regular passenger was a young girl about my son's age.  The club was intended to be co-ed, however as we moved up to higher age levels, more girls dropped out.  At one point I decided she deserved a better platform for her talents and advocated for a girls team to compete against other girls' teams.  I brought it up at almost every meeting til finally the logic was agreed upon.  I made a lot of the initial contacts to get it organized, but I didn't get to see how it played out, but understand it did progress.  The girl who inspired me did become a valedictorian.

I did move onto other tasks such as registrar which encountered a major glitch as the the provincial governing body sent in some defective software.  I also became a secretary where I made notes and wrote them up.

Again met a variety of people.  A doctor and a chemistry professor.  One of my favorite sales projects got rolling from a contact made through the soccer.  One of the most memorable characters was Seamus. who came to Canada as an Irish immigrant and no kids.  His wife suggested he get involved with soccer (his favorite sport was actually rugby).  He put a lot of time in and became president for a number of years.  When he became a parent he dropped out for a few years and then came back and contributed several more years.  Another immigrant volunteer was a professor from Poland who briefly coached my son and brought his own son who was one of the best players I had ever seen.

My wife was involved with the board of directors for the swim club and that required a late night once a month and often time consuming tasks during the week.  I got involved in sending in meet results to our local paper.  At first this was frustrating as all other amateur sports organizations tried to squeeze in the same limited time frame.  A fax machine ( from my work selling office supplies) proved a time saver and cut down on spelling errors.  On another project learned how to do a mailing list by computer and actually transferred that skill to my job.

The most frustrating aspect of volunteering was the criticism.  In particular I remember one nationally prominent sports announcer who came to one meeting as he happened to have a child in the club and was very critical of the board I was on.  We had previously discussed all his points and had agreed to what we could do with our resources.  When we pointed out we were looking for volunteers he let us know he had tremendous demands on his time.  Lots of criticism, but avoidance of the necessary volunteering was very common.

For me my volunteer activities ended when my children's interest shifted.  Sooner or later most youngsters move on to other interests.  It is possible to carry on without a participating youngster and for awhile I tried, but I also had other demands on my time and energy.  I spent over 10 years as a sports volunteer and although I can't say I enjoyed every minute of it it has left a deep feeling of satisfaction.   It also left a hole in my life, but somehow that hole has been filled in.

My attitude today is one of respect.  These activities we think are beneficial to our children and the community cannot survive without the dedication of countless volunteers.  They could be enjoying their leisure time, helping with civic concerns or making efforts to bolster their careers, or just be a couch potato, but instead they find the time and energy to do a thankless job.  There can be endless amounts of arguing and unappreciated work involved.  Those who do, are sacrificing their time for the good of others.
Posted by John F Davidson at 5:24 PM