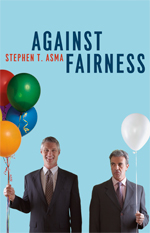 The philosopher author, Stephen Asma appeared on TVO with Steve Paikin a few weeks ago.  His premise for his new book stunned me and an investigation seemed in order.  It seemed to me that the problems of the world boil down to the fact that it is not fair.  Anything that can be done to make it a somewhat more fair world is worth doing.  The next few paragraphs are about the baggage I carried to this investigation.

At University one of the things that still affects me was Plato's "Republic" At the time it seemed a solution to the world's problems.  Basically children were not raised by their parents but by the community itself.  Who was given the opportunity to make money and who made decisions affecting the community was not decided by family connections, but by tests given at critical ages.  The idea was to separate money from power and as Stephen Asma  points out that reasonably assure disinterested (and therefore more just) decisions to be made. In other words your career options would be decided on merit not nepotism.

I grew up in a fairly typical Canadian family.  I knew my grandparents (have lived with both grandmothers at various stages) my aunts and uncles and cousins.  With five different siblings we now live in 5 different cities (at one time 6).  I felt family connections, but nothing like what I married into.  Family is everything.  At times I have felt it suffocating, but on the whole I love it.  I have benefited immensely from the support and concerns of my in-laws and I am not alone.  They have all benefited from close connections.  There is a feeling that no matter what the outside world does we will stick together just like we enjoy each other's company whenever practical.

A previous blog on "Fairness and Freedom" resonated my feeling that some cultures are superior because they (in this case New Zealand) are focused on treating everyone fairly whereas other cultures are focused on freedom supposedly emphasizing merit  (in this case United States.)  There was a  bit in there about how too great an emphasis on fairness could create destructive envy, but on the whole a fair society was more attractive.  You can read my post here:  http://www.therealjohndavidson.com/2012/06/fairness-and-freedom-book-review.html

Any social system has to accommodate human nature.  The idea of equality may have some merit in an abstract sense, but in practice it doesn't always work.  The author, Stephen Asma, admits that there is no one more precious to him than his son and the rest of his family.  Favouring your relatives is noted as nepotism and is considered a form of corruption when it comes to business and politics.  Ethnic networking has helped many deserving individuals crack the establishment.  Other forms of networking might seem artificial, but as we align ourselves with a wider group of people who share  something in common (sometimes only by attending a networking group) we extend our own power.  Aside from social pressure another factor in nepotism is that people naturally trust people they know more than strangers.

There is a natural chemical bonding established just after birth, usually between mother and child.   These bonds are critical for survival.   We humans retain a capacity to bond with others throughout our life, but family bonds are very strong.

Stephen has used examples from China and India to point out that in these societies family loyalty does come first and they look askance at suggestions that we treat strangers better than family.  From other reading I am conscious that in fact societies can only grow if we find ways to avoid killing strangers.  In our complex cities it is common to walk by hundreds of strangers every day which in other cultures would cause a great deal of anxiety.

Every day we make countless choices, most of which impact on both our families (plus other favorites) and society in general.  You may feel an obligation to one goal or another, but I now think it is legitimate to give your family first consideration, but probably not a good or fair idea to ignore the greater good.
Posted by John F Davidson at 5:44 PM