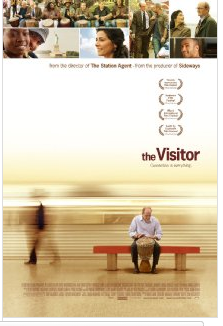 Hiam Abbass first got my attention in "The Visitor" where she entered the movie about half way through, but changed the direction very dramatically  The basic story remained (about illegal immigrants), but now this attractive middle aged woman added romance with Richard Jenkins.  You might wonder how a middle aged woman could get my attention.  Her personality is strong and mature which to me commands respect.

She was brought into America (from France) for this one movie and it was only flukey that I saw her again, but again she left a strong impression.

In "Lemon Tree" she played the main character as a Palestinian woman who had a lemon orchard that could not get necessary water to survive.  She eventually made friends with the Israeli wife of an Israeli cabinet minister.

In "The Syrian Bride" she played  the strong sister of the bride who would have to give up her home by marrying a Lebanese television host.  A lot of bureaucratic obstacles complicated this family drama.  Hiam's character helped make things happen.

She played the mother of a would be suicide  bomber in "Paradise Now" This was a tense psychological study.

In "Miral"  most promotion was given to Frieda Pinto who was criticized as not really Arabic.  Ironically the writer who wrote the book found people mistaking Frieda for her.  Nevertheless Hiam was a lead and once again demonstrated her strength and maturity.

In "A Bottle in the Gaza Sea" she plays the mother of the male lead in yet another Palestinian Israeli conflict movie.  She puts a human face on Arabs often depicted as either terrorists or simple minded people.

"Disengagement"  a French film released in 2007 featuring Juliette Binoche.  Hiam has a very slim role at the very beginning and that's it.

In "Amreeka" Hiam played the sister to  a Palestinian immigrant  played by Nisreen Faour.   Lots of cultural adjustments.

Perhaps the biggest movie I watched was Steven Spielberg's "Munich" but
she had a very small role, less than one minute.  She was good and I hoped she got paid well.

Most recently I watched "The Source," a most unusual movie in Arabic where the women of a village decided to hold a sex strike and Hiam plays a disgruntled mother in law trying to end the strike.

There seems to be lots of room for glamorous sexy women, but as I age I appreciate strong mature women.  Hiam, an Israeli Arab citizen who spends much of her time in France where she has made many movies.  She has presence.
Posted by John F Davidson at 6:01 PM