For years I have forced myself to read more non fiction books as a self improvement project and find fiction books very distracting.  When it comes to movies I have put the emphasis on entertainment.  However at the library one time Art Dyck told me of his preference for documentaries and thinking about it I decided to check them out.

My favored ones are all about corporate conspiracies.  I like to see progress, but recognize that other people are content the way things are and still others prefer the system to optimize their personal comfort.  It may seem noble to fight these conspiracies, but at one level I admit it is entertaining. 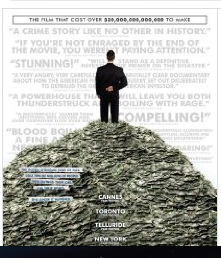 "Who killed the Electric car" (corporate conspiracy protecting fossil fuels).  Electric cars seemed like a significant breakthrough to alleviate pollution and global warming.  Rich people with a social conscience were anxious to buy, but they were forced to lease which gave the lessor more control than a seller.  At one point they were all recalled and trashed.  Most of the leassees were reasonably satisfied, but were given no choice.  The situation has progressed since then.   It leads to the conclusion, that powerful people are able to protect their economic interests at the expense of the rest of us.

Eliot Spitzer is a name I had encountered in the news, but first realized his significance in a documentary, "Inside Job" trying to explain the 2008 financial crisis.  While we were told a lot about foul deeds towards the end we learned Eliot was one of the most effective corruption fighters.  He was brought down as his weakness for paid sex was discovered and exploited.  More details came out with "Client 9" both about his efforts and his fall.  It was fairly clear that those who attacked him included those who were just as guilty as Eliot.  His problem was that he was seen as a knight in shining armor who rubbed too many people the wrong way and they found a way  to bring him down.  He is one of my heroes.

"An Inconvenient Truth" was ridiculed by climate denialists, but hits hard.  Dramatic touches have more impact to make the point.  We need to address climate change.  Al Gore and the Americans were done a grave disservice when the Supreme Court chose the wrong man.


"Why we Fight"  Wars are not always the result of cold military and political calculations as some have vested interest in industrial products (weapons). Politicians are protecting jobs, while lobbyists are protecting opportunities for profit.

"The Smartest Man in the Room" outlined the Enron scandal.  It seems there will always be a few people who use their brainpower to profit at the expense of the rest of us.

"Trials of Henry Kissinger' tells us how a very gifted and realistic political figure maneuvered circumstances to the advantage of American conservatives.

"Half the Sky" was devoted to the status of women that is still evolving.

"Food at the Table" shows us the corporate powers and how their preferences impact the rest of the country.

Michael Moore is the commercial champion of conspiracy documentaries.  Roger and Me was one of the first I saw about General Motors and his home town of Flint (my birth home was Oshawa and my two children took part in the Canusa Games held between Hamilton and Flint).  "Sicko" pointed out the American health care weaknesses that should have offended all Americans instead of the bickering we hear today.  "Capitalism;  A Love Affair" was pointing out many criticisms of the way business operates in the U.S.

"Maya Lin:  A Strong Clear Vision" was a simple film mostly about the Vietnam War memorial.  Maya Lin went through a lengthy competition and then was subjected to some very strong criticism some of which was sexist and racist.  Eventually her vision was accepted and it has generated strong supportive emotion response to and from the veterans.  Maya also did a memorial in Montgomery, Alabama to commemorate Civil Rights.

"Red Reign" was a shocking film about human organ harvesting in China.  According to this documentary the Gulan Fang members were targeted.  I had seen "Inhale" a fictionalized account about illegal organ transplants set in Mexico.  It is a world wide phenomenon that tests our feelings of ethics and equality.

"The Iran Job"got my attention because it was at least on  the surface about basketball.  It did go well below the surface to high light the life of an American basketball player, Kevin Sheppard for a year in Iran.  It was done with one cinematographer/writer/director, Till Schauder (assisted by wife Sara Nodjoumi) with very restricted access.  The key thing was that Iranian people are like us, but government is restrictive and discriminatory with women.

There are plenty of documentaries that are not primarily political and I enjoy watching some of them as well.  David Attenborough has made a number of remarkable nature films and inspired others.

"The Horse Boy" was experimental and one could easily imagine it might not have succeeded.  Rupert Isaacson had some film background and loved horses.  He learned his autistic son Rowan had some response to horses and searched for a place where he could combine horses and native medicine and fixed on Mongolia.  There was opposition from wife and friends, but he persisted.  In Mongolia things did not progress as he envisioned, but with a lot of effort there was a big breakthrough.  Part of my income is dependent on horses and I like anything that demonstrates that horses can play a significant role in our future.   If Rupert had failed in his quest we would never have known as much about the power of horses to heal and he wouldn't have set up a ranch to help autistic people.

Documentaries don't get the attention of commercial fictional movies.  They are more available on tv.  Hopefully they can generate enough money or support that we can have access to realities our commercial film makers don't have time or other resources for.  I will be watching for more.
Posted by John F Davidson at 2:36 PM