The Power of Sad Movies

Earlier inspired by a Thom Ernst topic on Fresh Air with Mary Ito to do a post on the joyous topic of kissing, the topic of sad movies brought up recently by the same team seems worth pursuing.  I have watched some of the movies referred to and was able to check out some I hadn't.  Memory can play tricks on you and what each person gets out of a movie is often very different.

I can appreciate why Thom Ernst named "Imitation of Life" as his saddest movie.  An element adding to the sadness is that it was just after a personal scandal of Lana Turner's daughter knifing her mother's boyfriend to death.  In this movie Lana portrays an ambitious actress pushing aside personal relationships (her daughter and her true love), but in the end there does seem to be a reconciliation and a realization of what she had done.  An earlier version of the movie in 1934 probably hit a racial nerve.  In the 1959 version we are never told any explanation why a daughter is much whiter than her mother, but know that it was common for an owner to rape or otherwise have sexual relationships with female slaves so that lightening of the skin occurred, but somewhat randomly.  That is the real tension.  Racial attitudes caused such a rift between mother and daughter that literally drove them apart.  What a tragedy that society attitudes, horrible in themselves could cause this further anguish.

As a youngster I watched "Old Yeller" and coming from a dog loving family was upset, but it was an early favorite and taught me to enjoy sad movies. It seemed ironic and unfair that the dog who protected the family paid the price.  The nobleness of the dog also struck a chord.  "Bambi," the classic was also a heart breaker.  A family friend, Bob Morley used to hate that movie as he loved hunting.

Thom mentioned Burgess Meredith's role in "Rocky" that had a very sad scene, but I remember that movie as one of the very few I actually stood up in the theatre (with many others) and clapped because it made me feel good.  I do remember Burgess in a much older film "Of Mice and Men" that rates as one of the sadder movies when Burgess shot his very kind and vulnerable friend played by Lon Chaney who he had tried to protect throughout the narrative.   A second viewing of "Rocky" the sad scene resonated with me.

"The Pride of the Yankees" contains the triumphs and romance of Lou Gehrig, but that just sets up the end.  ALS is now known as Lou Gehrig's disease and is more memorable because of his consecutive game record.  Gary Cooper, Teresa Wright and Walter Brennan help you like the hero. The writers and director were right to end the movie at his farewell speech about what a lucky man he was.

The saddest movie I recall is "Kal Ho Na Ho' near the beginning of my interest in Bollywood.  When I picked up my reserve copy at the local library the young girl checking out warned me it is very sad.  In truth it is classic manipulation.  In the first part of the movie it appears typically juvenile humour and from time to time the protagonist helps patch up some human relations problems but mostly the hero (this was a critical to my preference for Shah Rukh Khan) is cracking corny jokes many in poor taste.  At one point you realize that he loves the heroinne, Preity Zinta and before too long she is ready to reciprocate.  Surprisingly he lies to her and tells her he is already married. Then he works hard to set up her immature school friend which eventually succeeds.  Bollywood music is sometimes a distraction, but here under the guidance of Shankar Ehsaan Loy is used brilliantly.  The title song is first sung around mid point and basically seems philosophical--you don't know what will happen tomorrow.  In the second half you understand he has a dangerous heart condition.  It comes to a climax when he is hospitalized and the heroinne realizes she has been lied to and her new husband feels his happiness had also been manipulated.  Rest of the family and some friends gather around and the viewer realizes everyone present from a young girl to a bitter grandmother owes him gratitude.  Shah Rukh Khan admits to over acting and this is probably a good example, but fits right in.  I felt guilty for thinking the hero was so juvenile.  The music is the same title song, but now officially labelled "sad version" and it is impossible not to sob.  It has had that effect on me every time and when I hear the beautiful song it is also very affecting.

While still on Bollywood (I promise this won't just be Indian promotion) another movie that induces sadness is "Paa."  In it the producers have cast the famous 64 year old Amitabh Bachchan as a 12 year old and his actual son, Abischek  to play his father.  Near the beginning it seems like a romance and a comedy.  The twelve year old has a disease, Progeria and you are warned that it is fatal, but there is so much action with young children that you are more concerned about how the boy and the father will realize their relationship.  It goes in stages.  The background story is that a romance that seemed so promising was disrupted by a pregnancy and a desire not to abort.  The new mother who is studying to be a doctor gets support from her mother and the two of them raise the boy who is badly deformed, but very intelligent and give him an atmosphere of love.  The father,  the son of a wealthy man who is kept out, in the meantime, becomes an idealistic politician trying to do good things, but is being attacked by crooked media and other politicians.  He encounters the young boy who wins a contest and they start to bond.  My first movie seeing Vidya Balan who plays the boy's mother and later becomes a favorite..  The last words of the dying boy hit hard. 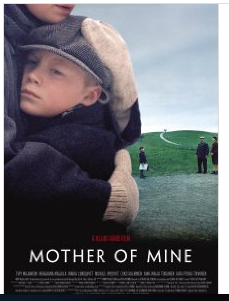 While I was researching this project through a flukey set of circumstances I watched a Finnish movie, "Mother of Mine."  It had another source of sadness.  Two mothers loving the same boy, but each having to give him up with the ups and downs of war.  A boy's love for his mother is perhaps the most natural thing in the world, but some unnatural things like war can disrupt the natural course of events.  Circumstances during the Russian assault on Finland during World War II  and neutral Sweden's offer to help whipsaw personal lives.  Most North Americans are unaware of these historical events.  Well done movie in a lot of technical details helps add to the impact.

Sometimes the greatest impact comes from the unexpected, but we usually watch movies for expected feelings. I apologize for the spoilers, but you did realize these were all sad movies! Tragic sad movies do fill a role at different times of our lives and if you are looking for a good cry bring along some kleenex and check out some of the movies mentioned.  If you would rather read about the joys of movie kisses check out http://www.therealjohndavidson.com/2013/02/kissing-bollywood-vs-hollywood.html
Posted by John F Davidson at 7:44 AM