The RETAIL REVIVAL AS SEEN BY DOUG STEPHENS 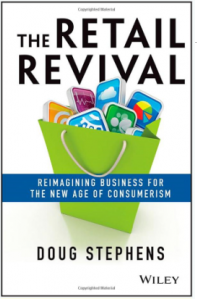 For people who fear change Doug Stephens paints a scary future for those who like to sell things and services.  His hopeful title indicates he does see opportunities to prosper.  First heard with Mary Ito on Fresh Air--a good source for ideas.

The world has changed and is still in process.  After the Depression it  took the Baby Boom to really get the economy rolling.  After the World II with all the returning soldiers there was fear there would be no jobs for them.  There were other factors, but with the increase in babies being born there was also an increase in demand for goods and services.  As Doug put it, most wanted to "keep up with the Jones" and advertisers had it easy if they had the money to use the three networks in the United States to reach most of the market.

Demographics have certainly changed and so has technology.  We live in a diversified population and with technological changes that were unforseen.  Advertisers now have a lot more channels to use to reach their "targets," but it is more expensive and more challenging to identify your target.  Automation and outsourcing are steadily shifting jobs.  The middle class is being diminished taking away the consumers who have been driving the economy.

Box stores replaced many smaller stores and all physical outlets are now competing against the inter-net.  Retail staff is treated poorly resulting in turnover and bad service.  Doug projects that in the future only two staff strategies will survive.  One set will survive by going as automatic (read self service) with lots of technological support.  The other set will survive by upgrading training, seeking out real product/ service advocates and also supported with technology.

The key question from the author that everyone trying to sell something should ask, When and where in the world are consumers when they are considering or in need of the things we sell.  Figure that out and set your resource to take advantage of it.

The third shelf is a new concept that is already progressing.  Consumers can scan Q codes with their smart phones, order products to be delivered conveniently.  The author does not predict the demise of bricks and mortar stores as a big component of shopping is social.

There are many examples of problems and solutions.  The book is very engaging and thought provoking.

For more of Doug's thoughts visit http://www.retailprophet.com/my-book/
Posted by John F Davidson at 9:29 AM