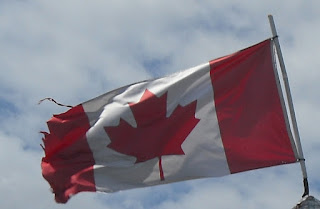 Several years ago Canada had a debate about changing our flag.  As I recall I was in high school and teenagers can be enthusiastic about changes.  Some older folks either felt we should be happy with our British oriented flag or that the topic was too frivolous to waste time on.  We did get a flag and most Canadians feel it does symbolize us and gets us respect from the rest of the world.  We are no longer mistaken for a British colony.

New Zealand is undergoing their own debate that might not be wrapped up for a few years, but I would like to encourage them.   A flag is a symbol and is supposed to reflect your country's values.  At one time Canada had a reputation for peace-keeping, although some politicians are trying to undermine that, most Canadians probably feel more comfortable with a peaceful image.  Apparently American back packers in Europe have found things go smoother if they stick on a Canadian flag sticker than an American one.

Like another outsider, New Zealand has a similar impact on the world.  Like New Zealand, Canada was settled by Europeans and was dominated by English, after putting aboriginals in a subordinate position.  The French settlers were a proud people not willing to give up their language and culture and although everything is not smooth, the British did let them keep their culture.  The natives were never as unified as Maoris  with their power diffused in a multitude of languages spread over a much greater expanse of land.  Increasingly our country is multi-cultural and we realize that is one of our strengths.  In some ways our Maple Leaf is more to be found in the southern parts of our country, but everyone identifies with it. 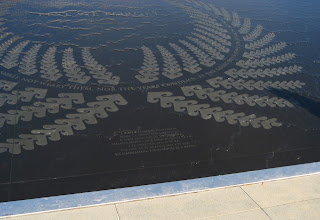 An outsider cannot really design a flag for you as we really can't understand your values and traditions the way they impact your lives.  Before I went to New Zealand the one thing I associated with you was the kiwi bird.  I used to shine my shoes with Kiwi shoe polish which I understand was used to identify the founder of the company.  When I actually visited we looked all over for Kiwis and found lots of stuffed ones and finally found some real ones (in the National Aquarium  in Napier) but were told we couldn't use flash to take a photo.  We did enjoy the watching.

However before leaving I was struck with the symbolism of the fern and have since learned of a design called the silver fern.  At the Auckland Museum I was very mesmerized with the Reflection memorial with ferns prominently displayed.  I was also impressed with a Maori guide at the Waitomo Caves who talked about ferns.

Living in the northern hemisphere we don't think a lot about the southern hemisphere,  Our focus is on our northern brethren and it might be helpful to remind us there is plenty of life on the other side of the equator.  Perhaps the southern cross could serve that purpose..

An ideal flag is unique and symbolic of your values.  When us outsiders think about New Zealand (some more than others) we think of peaceful, resourceful people.  You might think some other attributes are more critical and can be captured in a unique symbol.  There is nothing wrong with a British connection as Canadians in general see our own connection as very positive, but we are different and so are you.  Some people think the red in our flag (and even the white) are what remains of the British link

Are there more important things to worry about?  Certainly there are--climate change, pollution, wars, inequality, the robotic revolution.  You can decide on a new flag anytime you want, but the sooner you do the sooner your own identity will enhance every thing else you do.
Posted by John F Davidson at 1:54 PM