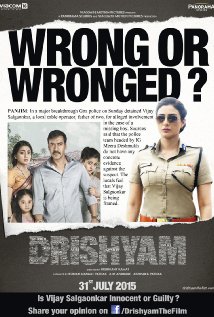 I first noticed "Drishyam" through IMDB ratings a few months ago starting at about 9.0, but not too many followers.  Then it dropped to 8.9 and it seemed would follow a pattern of when the masses see something it usually goes downhill.  Followed practically every day with raters going up a few hundred everyday, but the rate maintained.  Below I will confess the reason for my obsession.

I didn't see the original version in Malayalam but feel secure declaring it a masterpiece. The author, Jeethu Joseph also directed.  It is often the case in India that they can just dub the original, however when something is especially good, Bollywood likes to remake it in Hindi.  I don't recall ever seeing a Malalayam film, but have seen many other languages--Bengali, Punjabi, Tamil and Telegu.  There are over 38 million  Malayalam speakers mostly in India.

Ajay Devgn is the key cast member.  Although I have seen him in a number of movies that I liked he is known principally for action movies where someone is hit hard enough to do two flips and crash through a wall.  But "Raincoat," and  "Rajineeti" were both my preferred types.  He is married to Kajol, one half of my favouite jodi and they have two kids.  Ajay fitted this effort between two movies with his own production film delayed for three months.   He was assured this production could be filmed in less than 12 weeks.  There is no evidence of it being rushed, but instead with lots of subtleties.

Shriya Saran played his wife and she is the reason I followed this movie so closely.   Saw her in "At the Other End of the Line," an English speaking movie where she played a call centre worker, very much a girl next door type, except she decided on impulse to travel to America to sneak up on an American she had talked to on the phone.  Shortly after some effort saw her in her native Tamil, as a sexy double crossing bitch where she was impressive in a different way.  She has appeared in a Canadian movie,  "Cooking with Stella,"   More famously she was in "Midnight's Children" directed by Deepa Mehta.  Mostly she gets stuck with supporting roles and reviewers usually commenting on her looks.   I follow her on IMDB, but lately there hasn't been very much positive except for "Drishyam."

Rajat Kapoor is another familiar face  usually in small supporting roles, often as a sophisticated business man.  He played an important small role in  "Dil Chatha Hai," a movie partly set in Goa  as is "Drishyam."  He is also in comedies.  In "Drishyam" he again plays the sophisticated business man but is the one squeamish character which turns out to be an important factor in this movie.  He plays the husband to the real star, Tabu.

Tabu (birth name Tabassum Hashmi) has established a strong reputation.  She played a small role in "The Life of Pi"  (Pi's mother then dies off),  and "The Namesake"  She played a military leader in "Fanaa".  She  was in a romance comedy, "Cheeni Kum."  In "Astitva" " she plays the one time unfaithful wife of a hypocritical husband.  She won an award playing in "Haider " (as Hamlet's mother) and has won numerous awards in India.  She is award worthy in this film.  The trailer portrays her as a tough opponent, and in that regard she is more brutal than shown in the trailer, but also much more nuanced--particularly as a mother of a missing son.  More on her:  http://www.therealjohndavidson.com/2015/12/tabu.html

Two young girls who you might think are just decorations, but both required for critical moments and perform very well.  Ishita Dutta played the elder daughter and Mruan Javhad the younger.

Supporting actors are better than average.  A rough and ready police officer is well done as you will come to despise him.  Friends and family roles done well.

The story is a little different in that we know who committed the "crime" and we know the efforts to   catch them, but this is focused on how to avoid detection. Psychology is very important and is so well done that you feel yourself tensing up numerous times.

The director Nishikant Kamat uses such subtleties that reminds one of Hitchcock.  Actors are required to display a wide range of emotions.  I can only vaguely recall one other of his movies, "Mumbai Meri Jann" about a terrorist attack done with suspense.

The movie is a clever cat and mouse game with Tabu and Ajay.  She is the only one to realize he has concocted a story and cleverly induced many others to back it up.  The ending is poetic, but some have described as a twist, but there are many twists before hand and the ending is really sublime.

Except for some violence (mostly beatings), the movie is suitable for family viewing.  Bollywood for the most part is not as sexually explicit as Europe, Asia or even Hollywood, but you realize Ajay has a healthy sex relation with his wife and that sex sensitivity in a more puritanical society like India plays a key role.

My wife and I are watching and enjoying  "How to Get Away with Murder" which in a way could have been the title of "Drishyam."  The Viola Davis drama is more sensational and less psychological and with a lot of gratuitous sex.  I like a balanced diet of entertainment.

I came across comments that the story came from "The Devotion of Suspect X," a book I think is one of the best crime psychology books ever written, but what they have in common is only the idea of dueling with a smart detective.  There is a Japanese movie of that book and I would love to see it.

Chances are good you will before too long have access through your local library or maybe Netflix.  Likely there will be another adaptation.  I am also looking forward to the next movie of Tabu, "Talvar" that is already doing well at the festivals (including TIFF) with Irrfan Khan.  Ajay is in "Dilwale" with his wife, Kajol and the other half of my favorite jodi, Shah Rukh Khan which should be an interesting grouping.

As I rarely do single movie reviews the following links are to other exceptions.  To view another posting about a Bollywood classic with one of the same participants check out:  http://www.therealjohndavidson.com/2011/07/dil-chatha-hai-bollywood-classic.html  Still another single movie review with a "Drishyam" participant is at:  http://www.johnfdavidson.com/2015/02/haider-bollywoods-version-of-shakespeare.html
Posted by John F Davidson at 10:14 AM