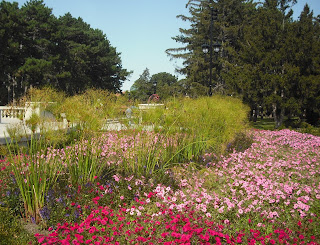 Some have suggested that if North Korea gives up nuclear weapons and makes peace with the South, Donald Trump would be responsible for it and would deserve the Nobel Peace Prize.  Anything could happen and nuclear disarmament anywhere would be greatly appreciated by the world.   We should encourage the possibility however we can  But, maybe we should wait before awarding.  Some of the same people lauding Trump were quick to point out that Obama really hadn't done anything before winning his Prize.

A lot are suspicious not just of Donald Trump, but also of Kim Jung Un.  Lots of possibilities.  The whole world would be relieved if somehow North Korea accepts restrictions on its nuclear weapons and missiles.  If Trump's belligerent crude ways work we may have to change our established strategies.

Trump is ready to give himself full credit.  That is what I find most bothersome--not acknowledging other factors.

Some Americans say that Iran is the biggest supporter of terrorism in the world, but I think many would point to Saudi Arabia for that honour.  It is dispicable to support Bashar al-Assad as Iran is doing, but it was Saudi Arabia who supplied most of the 9/11 attackers. Right now Saudi Arabia is literally killing innocent children in Yemen with the support of the U.S.

We are on the verge, of another opportunity to break the Iran agreement.  It is true that Iran is engaged in a lot of behavior offensive to the U.S. and others (much of it including me), but for practical reasons the agreement was based on the critical issue of nuclear weapons.  It is possible to attack other bits of behavior and still maintain the agreement.  One of the claims made by Trump is that Iran was actually paid for the agreement.  Referring to some money that had been frozen)+interest) that was originally Iran's.  His idea of a good deal is to grab as much as you can--he doesn't believe in win-win.  Netanyahu keeps presenting information that has been discredited perhaps because he genuinely fears the Iranian rhetoric, but maybe it sells well domestically.

Should Trump break the Iran agreement some feel that North Korea would feel it would be pointless to trust any agreement with the Americans.  On the other hand Kim Jung Un might reason that Trump is motivated to destroy Obama's legacy, but would want to establish his own.

Rhetoric tends to get out of hand as tensions rise.  This is true of Iran as well as Israel, United States and Saudi Arabia.

A common criticism of Trump is that he is not much interested in facts and has no drive to understand complex situations.  That might explain his trade ideas.  He seems to feel if he punishes foreign steel makers it will benefit workers in the United States.  For some workers that is true but a great number will have their jobs jeopardized because they depend on foreign steel for their manufacturing.  It also overlooks that American consumers will be hit with higher prices.  In the case of Mexico it was once thought if they could establish their own manufacturing and economy it would mean fewer would feel the need to illegally migrate to America.  Like health insurance how can anyone have known that trade could be so complicated.

Nobody likes to be bullied.  If the force is enough the bully will win for the moment, but generate resentment.  WWII started in part because of German resentment of how the Great War was settled.

China has been a protector of North Korea for their own reasons.  They have some fear that the more nuclear powers there are the greater risk of accidental wars; one of the reasons they helped negotiate the Iran agreement.  Japan has long been hated by the Koreans (North and South) and has been the only nation to actually have a bomb deliberately kill and make hundreds of thousands to suffer.  South Korea goes through cycles.  Their last election put into power Moon Jae-in, a former human rights lawyer who wants to facilitate better relations with North Korea.  He is the one who encouraged North Korea to get involved with the Winter Olympics and has made announcements to the world about what the two negotiated.  China does not want reunification as it fears American troops would be closer to their border  They also would not like the connotations of a defeated Communist dictator. .

It is true that Obama won for the hope that he represented.  Unfortunately there seems to be just as much fighting as ever and as many refugees as ever.  Perhaps if he had talked tougher North Korea would have bent.    He did increase sanctions similar to the ones that worked in Iran and tried various diplomatic efforts.

Others would argue that the North Koreans had developed their nuclear weapons to be a serious deterrent from American interference.  They saw how Muamar Gaddafi ended up after conceding nuclear powers.  Perhaps they now feel more secure and are interested to see how much they can gain from the tension they created.

Mr Trump is being hailed for his tough talk to Kim Jung Un.  Everyone prior to him let Kim Jung Un get away with abusing power.  All that was really needed was someone to talk tough with him.. People do respond to power and when it is presented in a bullying manner it often forces a response.

Should the North Korean tiger be tamed I will be among the billions of world citizens feeling relief.  To be honest I would admit that I am disgusted with so much of what Trump has done on the environment, on health care, on financial regulations, racial relations and his sexual infidelities.  But often the evilest person can accomplish some good.  I understand Hitler helped start Volkswagen.  Perhaps the solution might be should the negotiations succeed is to award more than one person as in truth it always takes more than one.
Posted by John F Davidson at 3:25 PM