My first awareness of Amitabh Bachchan was negative, but that is ok as his roles were very stern.   After two patriarchal roles the next one I viewed he played a bit of a goof.

My first experience was viewing "Khabbi Khushi Kabhie Gham" (2001)  where Amitabh drove his son (Shah Rukh Khan) to leave the country with his disapproved bride (Kajol). In "Mohabbetein" (2000) he drove daughter to suicide played by his his future daughter in law Aishwarya Rai and co-starring Shah Rukh Khan.  My third experience was watching him in "Kabhi Alvida Naa Kehna" (2006) where he played to my eyes a goofy comic role in a serious soap opera film playing the father to his actual son Abhischek.  These were all otherwise enjoyable movies.

Gradually his versatility and his role effectiveness created a more positive appreciation.

I had no consciousness of how highly regarded he was.  He had been named in a BBC poll as Actor of the Millenium over Charlie Chaplin and Sir Laurence Olivier  At his peak he could attract movie ticket lineups of over 2 kilometres in length.  He was the first Asian to have a wax model at Madame Tussaud's in London.  His name was the answer to a quiz question in "Slum Dog Millionaire" (which I actually got).  Filmfare, the major Indian film academy gave him over 30 nominations for best actor and 9 for best supporting actors, one for playback singer and one for producer.

Born as the son of a poet,  Harivanh Rai Bachchan.  By university days he had befriended Rajiv Gandhi.  He was interested in films, but surprisingly in the beginning his looks were not considered good enough for leading roles, but his voice was noticed as authoritative.  He once got a reference from Prime Minister Indira Gandhi (Rajiv's mother) which led to his first big break "Zanjeer"  He starred with his future wife, Jaya Bhaduri. 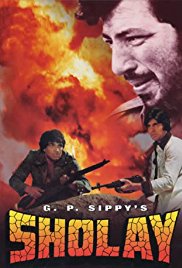 He played in a variety of roles including a popular comedy "Chupke Chupke" in 1975.  That was also the year he co-starred with Dharmedra in "Sholay" that was the most popular movie to that date.

During this time he also played in "Silsila" with Rekha who he was having a public affair with, and his wife Jaya Bhaduri.  Ironically the movie was revolving around adultery.

At the end of this period with the encouragement of Rajiv Gandhi he got involved with politics, but got out after 3 years.  He did not do well for a few years, but was successful as a tv host and after a business setback he restructured his business and has gone forward ever since.

In "Black" with Rani Mukerji in 2005  Amitabh plays the teacher who breaks through with a young girl who is deaf, blind and mute.  The script was mostly in English  He later succumbs to a type of Alzheimer's.  A big award winner for many of the cast and crew.  This was the movie where I began to appreciate his versatility.

"In Cheeni Kum" (2007) with Tabu and Paresh Rawal  he played an arrogant London restaurant owner who pursues a younger woman.  It was funny, romantic and at one point tragic.  In researching  I discovered the young girl played by Swini Khara had also appeared in my favorite movie, "After the Wedding"and also "Paa." 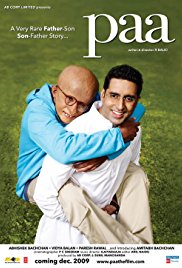 "Paa '(2009) was released with his son Abischek playing his father. Amitabh was born out of wedlock and had a degenerative disease requiring many hours of makeup preparation.  By flukey circumstances he unknowingly interacts with his father, by now a prominent liberal politician.  A very touching movie with the unusual marketing gimmick.

With "Laksyha" (2004) he played a tough but supportive military leader in a movie starring Hrithik Roshan and Preity Zinta.

In "Aarakshan" (2011) he high-lighted a delicate problem in India's education with world wide implications.  Amitabh played a dedicated school owner who wanted to support a quota system for the lower castes against privatization efforts to exclude them.  Read more  http://www.therealjohndavidson.com/2013/10/aarakshan-study-on-education-inequality.html

In "Piku" (2015) he played a doddering old father to Deepika Padukone.

With "Pink" (2016) he felt the three women leads should get billing over him, even though he was a a bigger draw and his name starts with an A.  This is a movie that deals with sexual consent and is a masterpiece.  Amitabh wanted to emphasize how polluted Delhi is and insisted on wearing a mask for outdoor scenes.  http://www.therealjohndavidson.com/2016/11/pink-sensitive-film-to-deal-with-consent.html

His only Hollywood movie was "The Great Gatsby," (2013)  in a minor supporting role as a Jewish gangster working with star Leonardo DiCaprio.

Returning to his voice .  He did narrate "Lagaan" (2001) which was a breakthrough for my interest in Bollywood, but not really appreciated his role at the time.   He also narrated  "Parineeti" (2005), a breakthrough movie for Vidya Balan who later played his mother in "Paa."  A movie with my favorite twist, "Kahaani "  (2012)  was capped by his singing voice over the credits.  In 2015,  "Shabitabh" (2015) was written for him in which he portrayed an actor with a voice to back up a Dhanush character who was mute.  Their egos clashed in a way symbolizing the contest between voice and appearance.

To get to well over 200 movies a lot were duds,   Played 15 duo roles and one triple role film.  His appearance doesn't guarantee a great movie, but he has been a key ingredient in some very top notch movies.  He doesn't appear to be very selective, but he has the advantage of being in such demand that scripts are written for him.  At his age he is more active than almost any actor and I am confident a lot of worthy films lie in the future.

The bolded movies are ones that I have actually seen.
Posted by John F Davidson at 8:56 AM