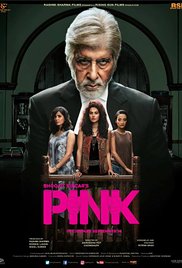 Many regard India as old fashioned, maybe even backward.  Gender attitudes are not considered modern in a Western sense.  "Pink" is a mind opening event for those of us who think we are "modern."  The movie drew a lot of attention being given a special screening for the Mumbai Police Department and has been used by politicians wanting to strengthen a new law. protecting women's rights.  This movie offers a lot of reasons to watch as it unravels mysteriously and dramatically, but it really is noteworthy for its message.

"Pink" is not so much about sexual assault, but more sexual harassment and gender equality.  The movie starts off with three women in the back seat of a car and three men in another car, one of whom has a bandage over his eye.  Soon we learn that one of the women had broken a bottle over the head of the bandaged man and the men felt entitled to revenge.  As the men are well connected they turn the tables claiming the girls had propositioned them and got violent when the men refused to pay.  The one woman, Minal is charged with attempted murder.

Some of the surrounding events were witnessed by a neighbor who it turns out is a retired lawyer on medication for a bi-polar condition.  His wife is bedridden.  He gives some advice to the women and later decides despite being on medication will represent them in court.  His first responses in court seem pathetic and we guess he must be too drugged.  However the court case becomes more intense with both prosecution and defense putting forth well prepared cases.

In a clever manner the defense lawyer strips away claims of provocation commonly used to defend sexual assaults:  the clothes she wore, her previous sexual experience, drinking alcohol and smiling in a friendly manner.

Amitabh Bachchan plays the retired lawyer.  My interest in Bollywood came after his hey day and he seemed to play a lot of unlikable characters, but I have since come to appreciate he is a great versatile actor who is always looking for good roles.  Amitabh in his 70's wants to keep active and appears in many movies and tv shows, but they aren't all masterpieces.  He is excellent in this role and helps boost the credibility of this film.  Read more about Abitabh http://www.therealjohndavidson.com/2018/05/amitabh-bachchan-living-legend.html

As the senior well established actor and with the initials A. B.,  Amitabh would normally be credited first, but in the interests of gender equality at his suggestion the three main actresses are listed first. They were all believable in difficult roles.  They were accused of being prostitutes and gold diggers, but in their words they were really "normal."  Tapsee Pannu was slightly more prominent and has been in a number of Bollywood movies and one Tamil film I had seen, but hadn't really noted her name.  Kirti Kulhari had a prominent role in a movie I enjoyed, "Shaitan."  Andrea Tariang was in her first movie.

Dhritimin Chatterjee plays the judge. He acted with Amitabh in still another excellent movie, "Black," and one of my favourites, "Kahaani."  Anglophones can see him in "The Man Who Knew Infinity."

Piyush Mishra plays a stern and tough prosecutor.  He is mostly a supporting actor and is very good.  I was surprised to learn he has also been a lyricist, a composer and a playback singer.  In an earlier favorite this year he played a storyteller in "Tamasha," an excellent movie about storytelling.  See http://www.therealjohndavidson.com/2016/02/tamasha-wonderful-story.html

A very key person in developing this film and promoting it is Shoojit Sircar, listed as creative producer.  He was involved with the story line, costumes and arranging special screenings.  Earlier he directed two favorite movies of mine, "Vicky Donor" and "Piku."

The music from Shanatu Moitra is in the background.  I have come to love much of the music in Indian movies, but realize most Westerners think song and dance is not realistic.  India has cultivated a lot of excellent composers and musicians and for decades they focused on song and dance routines that to outsiders seem an intrusion for a story.  To some extent most sense that music enhances emotional feelings.  This movie has no song and dance routines, but music plays a role in setting a mood.  I have enjoyed movies with Shanatu Moitra  ("3 Idiots" is a classic as is "PK") actually bought one song from iTunes and remember a few other tunes.  Read about "PK" http://www.therealjohndavidson.com/2015/03/pk.html

New Delhi is the setting and it appears a stately city, but a strong criticism is implied.  Amitabh, himself suggested he wear a face mask in many scenes to direct attention to the pollution.

During the end credits, the filmmakers elected to show us what really happened at the critical moments.  No surprises, but the point was the exact details didn't matter.  The women should have had their word respected.  The timing was appropriate as the plot unraveled gradually while the message was being felt more directly.

At the end of the trial the defense lawyer is asked if he has a closing statement and he hesitates for awhile and you imagine he is under medication after all the stress, but finally he says "no" and then after another long pause goes on to say "No is a complete sentence" and 'No' means no."  He comments that any one who says "no" whether a girl friend, a wife or a sex worker should be respected.  In this version the accused is let off from a charge of attempted murder and the three men are charged with mischief.  It seems poetic justice and hopefully will be accepted by all society, whether in India, Canada, United States or elsewhere.
Posted by John F Davidson at 1:03 PM