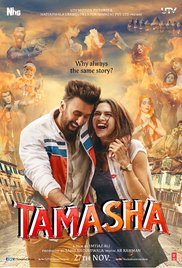 After almost forty movies this year, including many very good ones such as "Birdman",  this is the first I felt compelled to review.  You might think that a Bollywood movie only reflects my bias, but honestly this has universal themes that will hit most of you.  Like many it has a touching romance and like a few others it has appeal to the intellect, but most of all it a great story about story telling.

It is very confusing at the beginning with elements that may not fit in with your first preconceptions.  Eventually the little streams will join together and make a lot of sense.  Flashbacks help bring the present into context.  Tells the story very well after getting your attention.

Most romance movies depend heavily on misunderstandings.  Most finding oneself stories depend on conflict within the self.  "Tamasha" illustrates both of these dynamics uniquely because it also encompasses the dynamics of story telling.

Imtiaz Ali, the director writer has done a lot of excellent movies such as "Jab We Met" "Rockstar" and "Highway."  It seems likely there are elements of autobiography.  Directing and writing are the two most creative jobs in a movie which is really a story with special effects.  In his commentary Imitaz tells us that one of the mechanisms of the story comes from his brother Arif, also a movie director who had a friend visiting a foreign holiday destination and to have more fun didn't want to give his name or learn the name of a romantic partner.

Ranbir Kapoor, son of Rishi Kapoor got off to a pretty good start in his movie career, but has run a few flops.  This movie should set him back on the right path.  Deepika Padukone has been doing very well and has even deviated off commercial movies to more artistic challenges with success.  The two were a couple a few years ago, but broke up.  Deepika once insulted Ranbir on a tv talk show in a very delicate manner.  However they really fit together very well--both loving and hurting each other.

One other actor deserves mention, Javed Sheikh who plays Ranbir's father.  He displays some subtle emotion when it makes a big difference.

A common thread throughout is story telling.  There is some sort of theatrical presentation at the beginning, but before long the camera switched to a scene with a young boy being enthralled by an older reluctant story teller who he pays.  At first the story teller recounts a tale from Hindu mythology and later of the ancient Greeks.  Later we hear references to Biblical stories.

In the romance Deepika is imagined as a bold thief with access to a fortune in gold.  Ranbir pictures himself as a spy chasing her.  Much later this plays into another connecting mechanism.

A. R. Rahman, known to North Americans for the Oscar winning music in "Slumdog Millionaire"wrote the music. He has written some of the best music ever written for movies.  The music in "Tamasha" is good, but not his best.  I did add one song to my iTunes collection.

Interesting locations.  A major part is in Corsica where the two main characters meet and enjoy the land and seascape.  Other scenes included Kolkotta, Delhi, Simla and Tokyo (where rain cut down the scenery they wanted).  Overall the cinematography is excellent.

The book "Catch 22" was the mechanism to allow them to reconnect.  The man brought a copy to Corsica with a book store mark and  he commented on where he got it.  A few years later it enabled the woman to find our hero in a different city.

This is a very visual movie with lots of ingenuous settings.  Many details are used to make a point, some of which you will catch easily, but others you will appreciate more with a subsequent viewing.

In Bollywood stories are told with scenery, music, dance and of course words.  The viewer will see that based on his story telling talents the hero gains more tools over time.

Story telling is important to us all.  I remember writing about how important stories are to selling products and ideas:  see  http://www.therealjohndavidson.com/2011/06/tell-to-win-offers-winning-formula.html People don't buy statistics at least not until after they hear the story.  The best story tellers use all sorts of tools when they get the opportunity.
Posted by John F Davidson at 1:43 PM