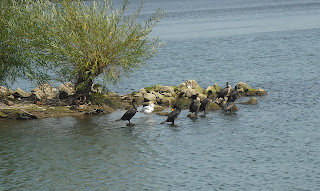 As a Canadian I have no say in the American Presidential campaign, but the whole world has a stake in the final result.  The final result is more than just who becomes president, and includes the makeup of the Senate and the House of Representatives.  Together they will set the laws and even determine who interprets the law.  They can all have a huge impact on the rest of the world.  I don't pretend to understand all the details of the process, and I suspect few Americans do either.  As with anything similar, a lot of preparation has gone on for this contest and will continue with adjustments.

Iowa seems a strange place to begin the formal process.  It is more rural, less diverse and apparently has a higher percentage of evangelicals than most states.  All these factors colour the result, but more importantly help set the wheels in motion.  Farm subsidies are a bigger issue than elsewhere and candidates have to address this concern.  Interestingly the big Republican winner, Ted Cruz is against subsidies to the ethanol growers, but tempers it a bit by refusing subsidies to other energy providers to even the playing field.  Less diverse people and more evangelicals puts greater emphasis on the issue of abortion and same sex marriage.  Candidates often find themselves locked into positions that might not carry as much weight in subsequent elections.

Being the first chance to gain attention the Iowa caucuses can be critical to many politicians.  The outstanding example is Jimmy Carter who was basically an unknown former governor of Georgia.  He identified Iowa as critical to gain public awareness and build momentum.  Far ahead of the Iowa caucuses he devoted a great deal of time to understand what Iowans were concerned about and cultivated contacts.  He also was able to boast about his zero based accountng that was demonstrated early in his campaign.  Although he didn't win Iowa he got national attention and was able to build on it.  It hasn't always worked out that way for everyone as many have been able to overcome losing in Iowa (even badly) to win the final prize, but it is now seen as a necessary credibility step.

This all gives Iowa greater power than their small size would normally give.  Many citizens take the responsibility seriously and candidates are forced into  explaining themselves to large numbers of small groups.  They offer what many consider an archaic process that differs for Republicans and Democrats.  I don't totally understand it, but was struck by what I know about the Democrat caucus system.

Each candidate is given a space that others can go to register their support.  There is even a spot for the uncommitted.  After each candidate has a representative speak on their behalf the assembled voters get to make a choice.  Any group that has less than 15% overall is broken up and forced to go to another group.  Sometimes the uncommitted are able to dominate, but they also are split up if they fail to reach 15%.  Many of us in multi party systems end up voting strategically, but in reality we are guessing with skimpy information.  In Iowa it is pretty clear amongst the Democrats which candidate is dominating and which might benefit from some support.  After some jockeying a decision is made and I think in some instances it must be more satisfying than attempts to strategize votes in other jurisdictions.

With the results in, the dynamics are changing already.  Although the rest of the race to the White House has different rules it is normal for some losers to give up.  Behind the scenes some financial donators are making decisions as well.

There were a few surprises, but not totally out of line with predictions.  In many ways I am very unimpressed with the voters response, but then they probably don't think much of my reasoning.
Donald Trump to a great extent coasted on his tv reality show and some bombastic declarations.  He was defeated by a narrow minded focused, Ted Cruz who understood the importance of hard work and organizing.  As a Canadian I would like to interject that Trump's assertion that Cruz might be disqualified for his Canadian birth was very unfair.  That little bit of doubt probably encouraged some marginal Cruz supporters to look elsewhere.  I think originally the Constitutional requirement of natural American birth was to protect the new democracy against foreign born aristocrats. Nonetheless it is a stupid law that hurts everybody.  All voters deserve to get the best person available.  Also don't forget the Constitution left out women and slaves as voters.

The establishment was relieved to learn one of their favoured candidates, Marco Rubio finished third.  This will allow voters and financiers to consolidate their efforts and resources against the outsiders Trump and Cruz.  A year ago it was assumed by many that Jeb Bush would be able to represent establishment Republicans, but I think the Iowa results make that much more difficult.  Others will soon be weighing whether it is worth the effort.  Becoming president isn't the only motive as national attention can result in a political appointment, a tv contract a lobbying position or selection as the Vice President nominee.

The Republicans were able to tap into a well of fear and ignorance.  That is compounded by the size of the field meaning that each candidate tends to try to outdo their opponents in sensational claims.  It is true that the American economy is a big letdown for many voters and that international conflicts are scary, but they overlook who is responsible for that and who has been mopping up the mess much better than his predecessor.  In eight years a lot is forgotten, but the origins of much that is wrong in America was brought about by policies, decisions and people that associated with Republicans and which they wish to continue.  Obamacare, a big step in the right direction is denigrated (I think that is the right word) and too many people accept the Republican view.  A decision to go to war with Iraq was one of the most stupid and deceitful decisions ever with very long lasting consequences.  Giving rich bankers and investors less regulations resulted in a major disaster for which others paid the price.

There is more to the economy than just regulations or the lack thereof.  The global economy  works best for rich investors who can shift money and manufacturing facilities easily to co-operating jurisdictions for more profit.  We are also at a point where machines can produce more goods than people can.  For some investors they are able to take advantage of this and for the most part seem unconcerned about who they are displacing.  There have been small attempts to adjust, but they are resisted by those at the top of the food chain.

Over on the Democrat side it became obvious they have a two way race, casting aside Martin O'Malley, an intelligent individual but without a national profile  He never really had much of a chance to make himself and his ideas known on a national scale, but at least he made it to the debating platform.  Others dropped out and others decided not worth the effort.  Senator Elizabeth Warren and Vice President Joe Biden are out of the running, but may get a significant appointment if their party wins.

There is not as much difference between the two remaining Democrat candidates as there are between either one of them and the Republicans, but there is a difference.  Bernie Sanders is characterized as an idealist and it is unusual for an idealist to make it this far.  Usually they have to compromise more than Sanders has so far.  Like Trump he is also tapping into a great discontent in the American population, but I think he has identified the causes better than anyone.  He may not be able to implement his ideas, but likely would bring us closer to a fairer society.  Clinton positions herself as practical.  She knows that Congress will be difficult to work with and promises she will get results incrementally.

Perhaps as the fields narrow down the important issues will be discussed in a more reasonable manner.  Republicans reflexively deny climate change, a stance that still carries a lot of weight, but is slowly fading.  Obamacare needs to be improved not abolished.  Immigration (including refugees) needs to be reformed.   Inequality will inevitably get worse until there is either a violent revolution or a collapse of society.

Campaign finance over rides everything.  No prospective politician will get very far without large amounts of money.  They will have to spend a great deal of time and effort to get the money and perhaps even more critical, compromise.  One example is Marco Rubio getting money from a casino owner who is demanding favourable treatment for Israel which may not be in America's best interest.  Energy companies are huge donators who want to maintain their status quo.  Investors donate to give themselves favourable treatment.  It seems most of those willing to contribute to a campaign want something that is not in the best interest of the rest of us.

The media sees the whole process as an opportunity.  The news creates interest and they tend to treat it as a horse race or a platform for sensationalism.  Most importantly they can get a lot of advertising revenue.  They certainly can and do often distort things.  CNN highlighted a weak moment of Howard Dean that helped undo his campaign, but had little to do with what he offered the country.   If they would just highlight candidate distortions and falsifications they would be rendering a public service, but they tend to just skim over the issues.

Will the Americans end up with the best result under their system?   We may never know what dedicated servant who is knowledgeable and exercises good judgment under stress would have come forward if it had been easier.  We can get only those who muster the resources to put on a good show.

The idea of starting with Iowa is not all bad as it forces candidates to talk to more actual voters.  That gives hard workers a chance to create awareness.  Part of the problem is the length of the voting, starting with the primaries and also including the national campaign.  It is a huge country and it takes time to cover it all, but there is another dynamic that cuts that down.  Many states already give the appearance of giving their voting delegates to one party or the other which means both parties feel little need to cater to them instead putting their resources where the outcome (as determined by history and polls) is undecided.  There is a trade-off between the expensive time required to make a case and the scope of the voters concerns.  There is no perfect system, but it is due for a study.
Posted by John F Davidson at 1:43 PM