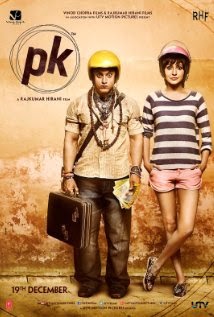 If you are wondering what PK means it is a common Hindi reference to someone who is drunk.  We tend to dismiss the babblings of inebriated individuals, but the movie is trying to point out that wisdom can come from strange places--a young innocent child, an alien or maybe even someone intoxicated.

Bollywood has produced a masterpiece of satire.  If Aamir Khan is in it you know it has to have a serious point made more pointed with humour.  When he is paired up with director-writer Rajkumar Hirani you can be sure of some clever dialogue.

Many people look down upon fantasy and science fiction because they are not "real."  However by exaggerating something or changing the context it is possible to appreciate something deeper.

India, more than anywhere else is the ideal country to make points about religion  They have more Hindus, more Muslims, more Sikhs, more Parsis and even more Christians than many whole nations. They also have a multitude of sects and other religions.  It is easy to offend, but also normal to tolerate.

An alien, played by Aamir Khan (with some supernatural ability to read minds through physical contact) is stranded on earth and at first understands very little, but eventually comes to believe he needs to find God to get back home.  Of course this leads to a lot of confusion.  He learns of deception and corruption.  At one point he contends that people are getting the "wrong number."  A later conclusion is that there are really two Gods--the real one who created us and the false one conjured by men, often for their own benefit.

There is a little romance in the story, but it doesn't turn out quite the way you might suppose, however it does tie in well with the story.  The music is appropriate and pleasant, by Atul Gogavale and Shantanu Moitra.

Aamir Khan is renowned as a perfectionist and that is on full display.  Anushka Sharma is earning more respect after many roles as bubbly young girls.  In a more recent film, "NH10" she plays a different type of demanding role.  Sanjay Dutt has a small supporting role and I understand that he saw the film while serving time in jail.  Boman Irani plays another supporting role and adds as usual to the credibility.  Sushant Singh Rajput plays a significant cameo while Ranbir Kapoor is just a flash near the end.

Rajkumar Hirani, the director and writer has put out a number of top notch films.  "3 Idiots" is another masterpiece and one of my favourite Bollywood comedies, "Lage Raho Munna" where he uses the ghost of Gandhi to make some points.

This is my second movie of the year with a religious theme.  The other one was perhaps better, only because it was simpler and not so pointed.  "Spring, summer, fall, winter...and spring" from Korea.  Together I would have to say they are my two favourite movies of the year so far.