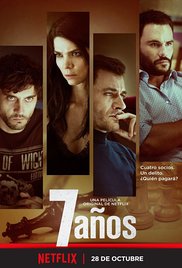 7 Anos is Spanish for 7 years.  Why would you want to spend 7 years in prison?  That is what this movie seen on Netflix, focuses on.  Netflix which has been in operation in Spain for a little over a year agreed to helped produce and distribute this Spanish film.

It is a very interesting exercise in mediation.  Mediation only happens when there is a conflict and the participants seek an outsider to help resolve the issues.  Each conflict is unique, but they share some commonalities.

The conflict is established fairly quickly.  A firm with four founding partners is being investigated and they have reason to believe that within a few days they will be charged and since they are each guilty they all could spend 7 years in prison.  They learn that it is possible for one of them to take a fall so that the business could carry on.  They cannot agree which one of them it should be and invite a mediator to help.

At first the mediator is presented with a contract for a period of years and he sees that the amount is far above his normal pay.  They have no long term problems for him, but next promise if he can mediate successfully their urgent problem he will get the job.

The mediator explains 3 rules:  everyone must be willing and if not can walk out at any time; they must listen to each other; and the mediator is not to take sides.

The mediator after hearing a brief account of their problem started by explaining a case.  Basically two men wanted a particular orange.  The challenge was how could they please both men.  The answer was to find out why each man wanted the orange.  In the example it was decided one man wanted the skin for a cake and the other wanted  the pulp for juice.  The point was that everyone is in a different situation and they should try to find the differences to decide.

The rationalization for the crime was they were working something close to 100 hours a week and the accountant realized she was being taxed at 56%.  And they further reasoned that the government wasted their money.

What follows is that grudges are brought out between the four.  They all recognize that each is important to the company.  One invented the product.  Another acts as managing director.  The third is a salesman who brings clients to them.  The fourth, a woman handles their money and is the one who initiated a tax evasion process that they all adopted and is the reason for the investigation.  The viewer is never told anything about the product.

They discussed who would suffer the least.  One of the men pointed out that it is common for white collar workers to get raped by hardened criminals.  The one woman pointed out there was a limited number of female prisons in Spain all of them too far for her relatives to visit and that women are easily raped by the prison staff.  Some of them tried to claim they had more family responsibilities.

They discussed who was most needed at the company and for their families.  Some personal details came out including who was slacking off, an affair and another and an abortion.  At one time one partner slugs another and draws blood upon which the mediator gets up to leave.  The man who threw the punch apologized and promised it wouldn't happen again.  The mediator was only persuaded to return after all four asked him to.  At one point one of the partners recalled when all four were in Las Vegas for a critical presentation and after a problem they all contributed to the success that got them launched.

The resolution had many ups and downs and finally reached a conclusion at which time there was a twist.  I won't spoil it as for me what made the movie so enjoyable was the process.  The acting, writing and direction was excellent so you could feel the tension in the room.  All the action took place in one moderate sized room with a sink and terrace.

Spain is supposed to be a strong anti-smoking nation and a few times it was pointed out all smoking had to be done on the terrace.  Later one of the partners broke that rule and ironically used the cigarette package warning to make the point that he wished there were more warnings.

The director Roger Gual had won a Goya award (like a Spanish Oscar).  Married to Marta Torné who provided a telephone voice near the end.  Roger also contributed to the writing along with Julia Fontana (the main writer), Jose Cabreza and producer Christian Conti.  Conti also produced a Peruvian/Columbian movie, "Undertow," a most unusual film I enjoyed a few years back.

Federico Justid, from Argentina wrote the music for this movie and for the Academy award winner "The Secret in their Eyes."

The viewer sees only five actors and they each play off one another very well.  Alex Brendemuhl had played Josef Mengele in the Argentine movie, "The German Doctor."  He also played with Ricardo Darin in "Truman" that I hope to see.  He has also appeared in German movies.  Juan Pablo Raba originally born in Colombia, but raised in Spain got started in Colombian television.  He can be seen in "The 33" and "Narcos.".  Manuel Morón who played the mediator was also in the prison drama, "Cell 211," and "Dark Blue Almost Black."  Juana Acosta is also from Colombia appeared in "The Liberator," one of my favourites from last year and has also been in at least one French movie.  Paco Leon had been a popular Spanish television star and has directed films and television series.

The Spanish speaking film industry is rich and diverse.  One of my most popular film blogs covers the topic in more detail including some more details of referred movies.  http://www.therealjohndavidson.com/2015/07/hispanic-cinema-spans-globe.html Hopefully Netflix will make more of them available in Canada and the United States.

Note:  The bolded movie titles are ones that I actually saw.
Posted by John F Davidson at 2:12 PM