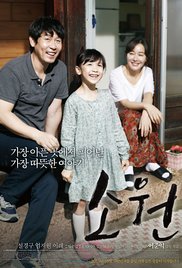 The sort of tragedy or test depicted in "Hope" is the sort we read about and forget so we can move on.  Unless of course it hits closer to home. and we have to make adjustments that seem impossible.  The English title "Hope" refers to the name of the young protagonist and not the emotional state.  An alternative title is "Wish."

A young 8 year old girl, Hope is severely raped so that not only is she traumatized, but she is suffering from unimaginable injuries.  The movie begins with her as a young student with two busy, but caring parents.

On a rainy day, late for school she is stopped by a man who seems to sweet talk her.  We do not see the actual rape, but afterwards as she is carted on a stretcher to a hospital.  The injuries include facial cuts, but more critically her bowels need to be partially replaced.  She will be wearing a colostomy bag for the rest of her life and we are given discrete glimpses of it.  For awhile we see stitches on her face that only gradually fade away

The parents are very upset and demanding action against the perpetrator who is soon identified.  They and some of their friends are very stressed.  The mother was five months pregnant at the time and her husband only discovered it because she fainted at the hospital during all the turmoil.

A therapist in a wheelchair seems to be sympathetic, but the girl's mother emphatically rejects her.  Later there is a change of heart and we learn the therapist had been through a very similar story with her daughter raped while young and later committing suicide.  The therapist herself was so upset she tried to kill herself but instead lost her legs.  She recognizes a problem beyond Hope and treats the whole family.

Hope is embarrassed, but encouraged to go back to school.  One young boy started crying because he had not walked with her the day of her attack.  The father comforted him.  Hope is supported by her teachers and fellow students and seems to be making an adjustment to live normally.

Testifying scares her parents, but they are told if she doesn't, the accused might escape punishment or get a short sentence.  The father confronts the accused in prison and loses his composure  His daughter overhears him saying he would take care of the accused if the trial does not go right.  She does testify behind a partial screen.  The defendant still claims not to remember as he was too drunk (with Hope admitting he smelled of alcohol) and is sentenced to only 12 years.  The audience in the court is very offended realizing when Hope will barely be 20 when her rapist will be released.  The father actually tries to physically attack the accused in court, but his daughter stops him  by clinging to him while her mother collapses.

The little girl, Lee Re is very good as Hope and Hae-suk Kim played her mother and had been in "The Thieves," (something like "Ocean 11, only more exciting).  The women who played the girl's fathers' s boss's wife, Mi-Ran Ra won awards as best supporting actress. A supporting actor, Song-ho Kim (who plays the father's boss and friend) appeared in one of the enjoyable ones I remember, "The Happy Life" where he was a drummer who with two other friends revived his high school band twenty years later.  "Hope" was directed by Joon-ik Lee who had done "The Happy Life" previously.

The music is in the background, but occasionally intriguing.  The composer, Jun-seok Bang has done a number of scores for movies I enjoyed including "The Thieves."  Part of the film was shot in Busan.

"Hope" is available on Netflix, and although it is one of those things you should do, it will be very difficult.  Most of you will appreciate that you are luckier than you imagined.  It does have a happy ending of sorts and we can all take some comfort.  A child rape has repercussions that effect many people for a long period of time.

My earlier experiences with Korean movies are mostly captured in http://www.therealjohndavidson.com/2014/04/a-slice-of-korean-cinema.html I still find some new good ones and feel South Korea is a major film producer.
Posted by John F Davidson at 7:44 AM