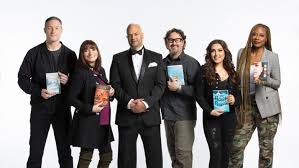 The CBC has a mandate to foster Canadian culture.  A great idea to boost interest in Canadian books has turned out to be Canada Reads on their radio network.  They recruit celebrities willing to make a commitment to read all the nominated books and prepare to debate with other very smart people. The book sponsors can really make a difference in a showbiz atmosphere, but they are great books and many listeners will be tempted by different books.

The facilitator host is also important.   It is entertaining and has evolved to be more slick and enticing.  The comedian Ali Hassan was in charge and did a good job of keeping the action moving.   The theme for this year was Open a book to open your eyes.  The show draws attention to Canadian books that has to be encouraging reading itself.

Obviously the winner benefits, but so do the losers (they really are winners to get this far).  Unlike other  years I had not read any of the nominated books, but after listening and watching the shows I felt the selection was good enough to follow up.  Previous years I ended up buying some books, one to my dog owning daughter, "Fifteen Dogs" and both of Laurence Hill's books that won--"The Book of Negroes" and"The Illegal."

The first one I read was "Precious Cargo"  It is non fiction and has a few insights into who writers work.  The author Craig Davidson had some minor success early on, but had squandered the opportunity.  He was dirt poor and desperate for work.  When watching the discussion on my computer and/or the radio I was struck by how the champion kept bringing up the importance of people seeing disabled people differently.  The book is written from the perspective of someone who grew up with normal prejudices and attitudes towards the disabled and how contact changed him.  Craig had changed names and altered descriptions, but his passengers had a variety of physical, mental and emotional disabilities that put them in the special needs categories.

Most of us shun visibly or otherwise known handicapped people when it is practical, not realizing that in addition to their disabilities they tend to be socially isolated.  The author doesn't shy away from their social problems.

Craig points out that the whole universe is made of the same elements just constantly being re-arranged and creating new humans.  Only a very slight change in the process results in diversity, but also "glitches."

Greg Johnson the advocate was very passionate and towards the end of the contest announced he was sending copies of "Precious Cargo" and also "Marrow Thieves" to some schools in Saskatchewan as he wants the books read.

Jeanne Beker, a fashion commentator championed  "Forgiveness" the eventual winner and my second read, both non-fiction.

Mark Sakamoto had an Scottish grandfather and a Japanese grandmother alive as he started the book.  His one Grandfather grew up in Magdalen Island and ended up as a soldier in Hong Kong in December of 1941.  His Grandmother, Mitsue was born in Vancouver, but when World War II started she and her family were deported to Alberta and forced to live in almost desperate style.  They each had plenty of reason to distrust the other.  The Scots-Canadian after his tortuous prison experience took comfort from a Bible and was focused on Mark 11:25 where forgivenss is high-lighted.

Those were models for the writer.  The real forgiveness came in his own life.  I was pleased to learn that he had worked for Michael Ignatieff,  Read a review of his recent book:  http://www.therealjohndavidson.com/2018/04/rescue.html

"American War" was championed by Tahmoh Penikett, an actor and martial artist, perhaps the most passionate advocate taking the book to the final two.  Tahmoh had been born in the Yukon with an indigenous mother.  Omar El Arkad, the author was born in Egypt and raised in Qatar.  Omar ended up in Canada as a journalist sent to a number of global hotspots. The book projects to 2065 and 2075 after environmental disasters and the second American civil war splits the nation. Some southern states refused to move away from fossil fuels.  What is United States had broken off into three nations and book is full of torture, drone bombings  redacted reports  reflecting back on current affairs.   In civil war situations one of the first dangers is a deterioration in trust.


"The Boat People" was championed by Mozdakh Jamalzadoh, herself a refugee from Afghanistan and as a singer invited to perform by Barrack Obama.. This book was eliminated first day in a very close vote. The other books each were voted to be ousted, but this one got two votes.  Based on a real incident, but the official records have been sealed.  It is not so strange that many are desperate to get away.  I read a review in NY Times by Ru Freeman, herself from Sri Lanka that was not as favorable as my opinion.  I had read a good book of Freeman's a year or so ago and respect her opinion on other subjects.

On the front page was an endorsement from Omar El Arkad, one of the other contestant authors.

A link to another Canada Reads book ("Forgivenss") was that one of the main characters had a family history with the Japanese internment during WW II.

An over riding theme was Truth vs. Fear.  No matter how logical the advocates for refugees are there is an emotional element (FEAR) that is difficult to overcome.  A memorable quote, "Were these people dangerous?  That was the million dollar question."

Refugees are a global crisis and Canada has not always been as generous as we would like to assume. I have had some personal contact with Hungarian, and Vietnamese refugees.  The world is very turbulent with warring factions and ever developing climate change/
http://www.therealjohndavidson.com/2018/04/rescue.html

Jully Black, a singer I listen to championed "Marrow Thieves"  Written by Cherie Dimaline who is of Metis background living in the Georgian Bay area.  The book had won awards in the Young Adult category which surprised me.  Focus in a future after environmental disaster.  As material comforts disappear one item left is dreams, but only with indigenous people who flee to northern Ontario.   The dreams reside in their marrow.  Much of the story takes place near Espanola, Ontario.  Jully is sensitive to racial issues and was able to make a few points.

Next year I will try to get ahead of the game.  There is also a French version, but that might be too much of a challenge.