WHAT IT'S LIKE TO BE A DEPUTY RETURNING OFFICER 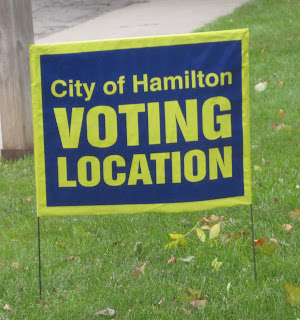 Municipal elections attract the least attention of the three levels of government.  Having participated in elections at all three levels I can say that in Hamilton, Ontario at least some things go smoother.  Yesterday I was deputy returning officer for the election for the city of Hamilton (Ontario).  At the end of the evening the actual vote count is known comparatively rapidly partly because they rely more on computers (but backed up by paper ballots).

Four years between municipal elections with a two hour training session plus manual to read.   One can get a little rusty.  I was asked to work at a by-election in another part of town (actually on what we call the Mountain), so that helped a little.  As I mentioned I have also worked at provincial and federal elections with many over lapping tasks, but each is also unique.

Patience is required.  Most voters do not understand the technical process.  As an example the returning officer is expected to check off a sequential number on one sheet and transfer it to the voter on the official list as one tool to help balance.  It is simple enough but when there is a long lineup and other problems pop up it might not get done properly.  Most voting is pretty regular and smooth, but there are lots of exceptions.

It is not always busy, in fact sometimes it is downright boring.  You eat and visit the washroom when you are able, but that is not always predictable.  Some bring a book or knitting. Of course talking to your fellow workers is normal, but you cannot talk politics.  It can be very tiring and balancing at the end of the evening can be very frustrating.

I have worked at half a dozen elections, but this was the first where I was really in my neighborhood.  I met neighbors from only a few doors away from mine.  The most unexpected encounter was a man who had a connection to my wife's family.  I recognized his name only because a relative had given me his aunt's maiden name when I worked on a family tree years ago.  It turned out this man was her brother.  Although we had been fairly close to this family, even more than just at Christmas we had gone our separate ways.  I learned a little about my wife's cousins. and that we are all more connected than we realize.

Municipal turnout is usually less than for the two higher level elections.  Residents in a town have more everyday contact with municipal services such as garbage, police, fire, parking, recreation facilities, snow plowing, street signs, etc.  A lot of higher level politicians have gotten their start at a local level, but at the time they are not nearly as well known.  Ironically it is possible to have an impact with a single vote, but somehow we are not engaged at the local level.

Checking over the results it is very common for someone to get elected with less than 50% of the vote.  Often there are some issues that create interest, but the winning factors seem to be related to how well connected a candidate is.  Incumbents have an advantage.  Any newcomer has to make an effort to draw attention.  In truth not that many people attend debates or other formal events.  Most newspaper descriptions are scant and superficial--everybody wants economic growth and better communication.

The ideal is to get one candidate over 50%+1   Political parties deciding on who should lead their party mostly adopt that system.  The reason why is perhaps because they recognize that is the best way to have everyone accept the results and more importantly wiling to work as a team.  In many countries it is common to have a second election for a high office if the first does not result in 50%.  There is usually a time delay and of course expense.  Time delays can be important to get moving on ongoing projects, but perhaps a delay might be worth it to get the right decision makers in place.  Again expense is a concern, but admittedly democracy is expensive.  http://www.therealjohndavidson.com/2017/03/two-round-elections-food-for-thought.html

Elections have more credibility when more voters express their opinion (with the secret ballot), but it seems it is a difficult task to get everyone out.  Canadians have made it easier for voters at all levels to cast their ballots, but we still find it difficult to get out much more than half the eligible voters.  The reasons why are part of countless debates, but surely one problem is that many feel their vote won't make any difference in their everyday life.  Our first past the post system is one reason where in fact it is very common for the winner to have gotten less than half the votes. Politicians understand this and the clever ones with financial support certainly take advantage of it.  They end up representing you whether you voted for them or not.

Elsewhere I have advocated for a proportional system, but admittedly that works best when there is a well established party system.  Many people can be heard to say they vote for the person, not the party, but that is hard to believe.  At the local level it is often said that party politics don't belong.  One reason might be it is desirable to give individuals with convictions an opportunity to express them.  Inevitably party politics do factor into municipal elections, but there is still hope they can be minimal. Read more:  http://www.therealjohndavidson.com/2014/12/your-guy-didnt-get-in.html

The idea of ranked voting is to get a decision that everyone can live with as soon as practical. When the winner might have less than 30% it seems unfair to dismiss the person who was only a small percentage behind with obviously other candidates factoring in.  As I understand one variation under a ranking system a voter can choose a second and third and even more candidates. If no one achieves 50%  the last place candidate is eliminated.  Their votes are transferred to their second choice.  If their second choice is eliminated then their votes are transferred to their third choice.  And so on until the goal of 50%+1 is reached.  A voter is not requited to rank everyone as it is recognized they might prefer a particular candidate be elected.

This can be much quicker and cheaper than going to a second round.  Voters have to decide ahead of time who might be an acceptable choice if their candidate doesn't go over the top.  No time for deals after the initial voting (unlike in political leadership conventions).  Some voters will see the advantage of researching the issues.  They might start off voting for someone who has indicated they favour a particular solution to a perceived problem or they might vote for someone they have some favorable awareness of.  But what happens when their first choice doesn't measure up?

A country, province/state or municipality work best when the population supports those elected to represent them.  Like many I believe a better solution lies with the system.  One good sign was that a number of voters brought their children so they could see the process.
Posted by John F Davidson at 4:33 PM