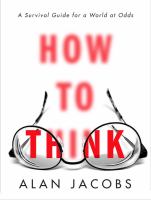 It is true.  You already know how to think.  Do you think you could think a little better?  Perhaps a bit pretentious, but actually Alan Jacobs does have a few good thoughts on the matter.

We focus on making better decisions while Jacobs focuses on process.  He alludes to Jonathan Haidt who used a metaphor of a rider on an elephant to substitute for the conscious and unconscious mind. (read more at:  http://www.therealjohndavidson.com/2017/10/are-you-interested-in-happiness.html Jacobs says thinking flows from our situation.  We cannot help the many details of our environment, but at some stage we can make some conscious decisions that will have long term impact.  A key element is the group of people you choose to be active among.  It is pointed out that if that group is resistant to outside ideas they are not the ideal base to develop thinking.

Jacobs believes a crucial factor in our ability to think is to socialize with open minded people.  He talks of the Repugnant Cultural Other (RCO), those other people who are not worth considering.  He himself is a Christian and is conscious that that automatically makes him a RCO in many groups and he is on his guard not to dismiss anyone.  An example he gives regards the Westboro Baptist Church which has gained the reputation of extreme homophobic activities.  To them homosexuals are unacceptable, but Jacobs learned of one member who stumbled on a homosexual and eventually found they could no longer spout hate language at them.

Thinking is thought of as solely an intellectual exercise, but Jacobs uses the example of John Stuart Mill to point out the shortcomings of this assumption.  John Stuart Mill was brought up in an overly rational manner and he became adept at languages, mathematics and similar endeavors, but felt his life was flat.  He discovered emotions through poetry.  He was one of the founders of Utilitarian thinking who felt that every decision depended on which choice would create the greatest amount of happiness.

Logical thinking depends on what your goal is.  One interesting example given was of Wilt Chamberlain, considered one of the best basketball players of his time.  His one weakness was foul shooting to the point of embarrassment.  Someone persuaded him to shoot his foul shots underhanded (like the high scoring Rick Barry) and his percentages improved.  But he stopped doing it and experts asked why.  Of course they assumed his goal was to score many points and win games which to some degree was true, but underlying a more potent goal.  He has bragged that he had sex with several thousand women and Jacobs suggest that was his higher goal.  Underhanded shooting was not considered masculine.

One example of open minded thinking was the Yale Political Union, a debating group with a different focus.  In debating a goal is to break or convert the opposition with the force of your argument.  Debates are usually decided on points for skillful arguing with public conversions rare.  While a debater is admired for the ability to break an opponent in the Yale Political Union they admire the person who is broken as displaying open minded thinking.

In most groups there is an inner ring.  In many cases any member who asks an uncomfortable question is rejected.  In a family (which can include pets, very close friends) the individual is not inter changeable.

Jacobs points out that those who agree with you will not always be in charge.  We all need to abide by the same rules, otherwise we risk losing a peaceable social order.  To deal with our opponents we should seek the most fair minded.

A suggested format for discussing an issue is to let one person make their case.  The second person to summarize that case to the satisfaction of the first person.   Only then the second person makes their case and this time it is summarized by the first person.  Before going forward each person must demonstrate they understand the other's case.  We all need honesty and flexibility to adjust our views accordingly when the facts change.

Sunk costs are known to be a problem with financial decisions.  As more money is committed to a project it becomes more difficult to move to a different solution even when the facts call for a change.  The same concept can be applied to ideas as they can become entrenched.  Jacobs refers to Eric Hoffer's "True Believer" where some people become so tied to a specific philosophy that everything opposed is either distorted or dismissed.  Social media is often used to fortify a viewpoint, but there is also the possibility of expanding to a different viewpoint.  Essentially if the in group you belong to is intolerant to outside ideas it is not a good place for thinking.

Jacobs brings up the practice of classifying, the science of which is taxonomy.  Charles Darwin who spent a lifetime discovering and classifying thousands of species developed the idea of lumpers and splitters.  Lumping occurs when one entity is added to another.  A modern example might be the LGBT movement is one that continues to add new components.  Splitting is setting up a new category.

To deal with opposing view-holders Jacobs suggests you learn their RCO's moral dialogue.  Humanize problems whenever practical.  People make conclusions based on their circumstances but as circumstances change a change in conclusions is possible.  While we are looking outward Jacobs points out we need to examine our own motives--why does it suit us to think the way we do?

In conclusion I would like to quote Jacobs:  "I can't promise that if you change your mind you won't lose at least some of your friends...  There likely are commonalities.... Do not think of your old friends as losers if you used to think the same."

If you need to think about it more before committing to buying or reading the book check out this website:  https://howtothinkbook.com
Posted by John F Davidson at 6:27 PM