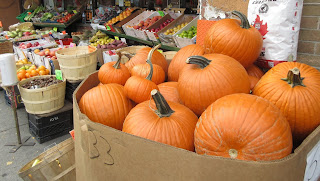 There are a lot of holidays that we look forward to.  A lot are excuses for indulging--Christmas, New Years Eve, Canada Day/Fourth of July.  Thanksgiving is one where the focus is on what we already have.

The original Pilgrims (one of my ancestors was on the next boatload) celebrated  in October 1621 They survived  difficult winter with the help of natives.  90 natives attended the three day feast and 53 (of original 100 Pilgrims ) attended carrying on a religious tradition.

Some Canadians lay claim to an even earlier first Thanksgiving.  Martin Frobisher in 1578 was so grateful  to have survived a journey the Arctic that he declared Thanksgiving.  In reality back in 1859 some Protestant ministers campaigned for a Thanksgiving holiday.  In 1957 Canadians decided on the second Monday in October to create a long weekend.  Canadians celebrate a month ahead of the Americans as their harvest is earlier in the season.

Secular holiday Excessive food--great variety--feel obligated to try them all  come from a more British background one joy for me was cranberry sauce which struck my Italian/Ukrainian in-laws as strange   In the last decade or two cranberry has increased in popularity as a healthy food and interesting flavor.  Pumpkins Pie used to be mostly just at Thanksgiving, but recently pumpkin flavor has become popular a greater part of the year.  Turkey seemed normal, but pasta (which I love) and peas and mushrooms were usually included.  We usually celebrated on Sunday.  This past year circumstances conspired for a Monday dinner which helped coincidentally resolved a lot of conflicts with in-laws who preferred Sunday, but were happy to join us for their second celebration.

Thanksgiving is now a major shopping turning point.  Black Friday (the day following the American Thanksgiving) has been the scene of hysterical American shoppers.  Canadian merchants feel they have to compete particularly near the border as many Canadians cross over to take advantage of bargains..

A movie, "Beyond the Lights" is an interesting enough movie, but what I most remember is a song called, "Grateful."  A young singer went through some rough times before her life turned around.  Song expresses gratitude not only for the ways things turned out, but also all the painful steps along the way.   Rita Ora sings emotionally backing up the star, Gugu Mbatha-Raw

We live in a consumer society and more of us are realizing that is not helpful or as satisfying as it once might have been.  Just as pumpkin and cranberry flavors have expanded hopefully a feeling of gratitude and enjoying your family and friends will also spread.
Posted by John F Davidson at 2:03 PM