Japan Sinks: People of Hope Emigration on a national scope 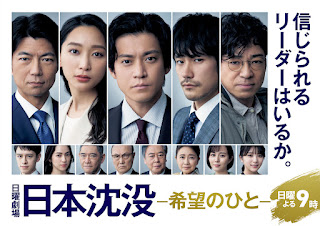 There is a scarcity of my normal information available, but thinking the themes and execution are worth exploring here are some random thoughts on "Japan Sinks:  People of Hope" (2021 ) available on Netflix.

The original "Japan Sinks" book was published in 1973 and won several literary awards for science fiction author Sakyo Komatsu  and was concerned with an actual sinking of land.  It has been adapted a few times over the years and this version reflects current concerns.  Without giving away the plot this version has attached climate change and global pandemics to the sinking.

But it goes beyond actual geo/bio logical disasters and explores the possible political and social implications.  Fiction, especially science fiction has the ability to make us think--what if?  Because some of those what ifs are more relevant than we might realize.

When the Japanese came up with the concept they projected from their circumstances.  As an island nation with a history of severe earthquakes they have always felt vulnerabilities that have only been exasperated by rising seawater.  In the first episodes a scientist declares the area around Tokyo is going to sink below the water and this later is projected  to include the whole island.  Right away some people want to suppress information in order to preserve business--as one politician declares the economy is the basis for society.  Perhaps that may touch a few nerves as we notice  the stresses on our economy by the Covid 19 pandemic.

Some people see the disaster as an opportunity.  Stocks go up or down by inside information.  Properties are sold before the market disappears.  Politicians legitimately want to avoid rattling the population so that rational moves can be made and of course information and misinformation soon cause panic.

The film focuses on people who try to deal positively with the problem and learn to adapt to ever rising new aspects to the problem.  A government environmentalist and a journalist work together with scientists and even corporate leaders.

In their case someone decides the most practical solution would be massive immigration with in effect eco refugees.  Today we are aware of strong resistance to immigration as the established citizens fear hordes of strange people imposing on their lives.  The Japanese in particular are resistant to immigration.

They approach several countries and at first are rejected, however the idea of locating major Japanese corporations in Japantowns demonstrates they could be benefits to recipient countries.

The first time it has been suggested that an entire nation (and not a poor one) would relocate.  There always seems to be a conflict when newcomers try to fit into a new neighborhood.  They succeed in getting international co-operation but have trouble convincing many of their citizens from leaving home to live in a strange country where the language and customs may be frightening.

To be fair the immigration program is to be decided by lottery.  Various schemes run into opposition, but are smoothed out.  A complication comes later in the series (a bit of a spoiler, but helpful to develop the theme) with a global pandemic being attributed to Japan.  As you can imagine by our reaction to a variant in South Africa this puts a damper on the entire immigration program.  In this fictional version the Japanese talent for innovation alleviates the concern and even boosts their desirability.

Many of my readers may recall having to leave one's first home and many more are where they are because some of their ancestors had to make the decision to leave their home environment on a leap of faith.  This film paints a stark picture, but we should all realize our future could easily force similar decisions on us and our descendants.  "People of hope" in the title refers to the persistence of politicians an scientists despite very difficult obstacles.

The presentation is very thought provoking and will try to credit some of those who contributed.

Based on famed science fiction writer Sakyo Komatsu book of 1973. He had been born in 1931 and thus was a teenager when the atomic bombs were dropped on Hiroshima and Nagasaki.  He studied Italian literature at Kyoto University.  In 1961 entered science fiction contest and wrote a story as if Japan had not lost in 1945, but focused on one man's defense.  Writing his famous book in 1973 it sold 4 million copies in Japan and was adapted to an American film, "Tidal Wave" (1973).   Another of his books was also adapted to the United States. "Bye Bye Jupiter" in 1984.  A quote I would like to share, “I sometimes wonder if our intolerant territoriality is really justifiable on this planet, where continents are constantly drifting.”

Hiroshi Hashimoto has been credited with writing the script to fit today's understanding.  He has been involved writing scripts since 1989.

The lead actor is Shun Oguri plays a government official in an environment department that warns the government of impending danger and has to be persuasive and innovative to work around the dilemma.  Last year he won an award as most popular actor.  He started with films in 1995 at age 13 and has over 100 credits.

Jun Kunimura plays one of the stern politicians resisting moving too fast.  Ironically Jun's first movie was An American edited version of the original "Submersion of Japan" (1973).  Not only has he appeared in Japanese films, but also American and Korean including "Kill Bill"(2003 and 2004), "Like Father, Like Son"  (2013) and  "The Wailing" (2016),

Ken-ichi Matsuyama, played another progressive politician.  Ken-ichi started in films 2002 with over 80 credits including "Norwegian Wood" (2010).

Teruyuki Kagawa plays the obnoxious scientist raising the alarm against political opposition.  He has won a fe  His films inlude "Quill:  The Life of a Guide Dog" (2004), "Key of Life" (2012)  He won several national awards.  He comes from a family of Kabuki actors and is involved himself.

Anne Watanabe plays the journalist and close friend to the leading man.  She is the daughter of famous actor Ken Watanabe,

The actual series had the fourth episode delayed as it coincided with the Japanese election   Netflix is planning to bring two more Japanese series to their schedule in near future.

Outer space exploration has had as one motive the desire for more space.  It is to be hoped that mankind doesn't blow up or otherwise destroy our home planet. It is unlikely mankind would ever be able to transport millions to outer space colonies.  Maybe send up embryos as proposed by some science fiction authors.

How I reconnected to science fiction: http://www.therealjohndavidson.com/2011/09/conversion-can-sneak-up-on-you-too.html

I have bolded the first mention of movies that I have seen, partly for vanity, but also to assure you I have some familiarity.