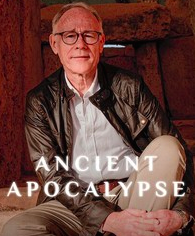 "Ancient Apocolypse" (2022) is fascinating for sure, but how much of it is realistic?  Graham Hancock has quite the reputation for defying established science.  He even disavows he is a scientist, preferring instead the moniker of an investigative journalist.  I suspect the scientists he denigrates are not as reluctant to explore new possibilities as he implies.  Having said all that, the material is fascinating and provokes many questions.

The title although scary is even more strange--Apocalypse is normally referred to as a future possible event. Graham leads us to his theory that a higher civilization existed before the Ice Age and were destroyed.  He presents a lot of evidence that he ties together with some interesting speculation.

I recall that the story of Pompeii was ridiculed until it started to be uncovered.

Historical memory is heavily dependent on written records (and archaeology).  Trained archaeologists demand more evidence than Graham can produce.  We are taken to old megalithic structures in such places as Indonesia, Malta, Mexico and Turkey.  There are apparently a number of commonalities to them, but there are no written records.  Some of the architecture lines up with astronomical signs (with sun and/or stars).  They involved the movement of very heavy stones.  A lot of symbolism is carved in stones.

In Cholulu, Mexico the Spaniards had massacred all the inhabitants.  There is a pyramid that Graham claims hides earlier structures.  A Canadian archaeologist/anthropologist from U. of Calgary Dr. Geoffrey McCafferty says the structure was likely built over period of a thousand years.   Common elements with the pyramids of Indonesia (and Egypt) are over sacred springs  and contain hidden passages

The Ice Age ended about 12,800 years ago and resulted in massive increase in water levels that cut off many land bridges while creating many islands.   It is further speculated that there have been a catastrophic  comet that created a lot of damage, but also led to massive floods.

In his section on Malta which at time was linked to Sicily, Graham suggests it might have been Neanderthals  that crossed over.  There is no further mention of the Neanderthals, but is it possible they were the masterminds of at least the Malta megaliths?  They did disappear somewhere around the Ice Age and some humans carry some Neanderthal genes.

Near the island of Bimini just off the coast of Miami  are signs of a much earlier civilization hidden by water.  Apparently Plato wrote about Atlantis, but nobody has found any trace of it.  Graham speculates that it may have existed near the Bahamas.  They may have disappeared after a catastrophic event.  Graham further speculates as a warning to us that the people living there were too arrogant to pay attention to signs of a disaster.

His last location is known as Poverty Point which he is forbidden to film as the authorities state they do not want to be associated with his speculations.  Using aerial photography and talks with others he speculates that like with the other sites it contains snake symbols. Graham then reminds us there were many serpent symbols at the other megaliths.  He then speculates that all the sites seemed concerned with astronomy perhaps because the most catastrophic event might have been a comet that can be interpreted like a snake.  Furthermore if it was a comet or asteroids it would explain the interest in astronomy.  Again more speculation that the different sites and possibly more had communication with one another.

Carl Feagans, an archaeologist has been quoted, "Every single archaeologist I know would be elated to discover any previously unknown civilization of the Ice Age or any other for that matter."  I would not say Graham's theory is preposterous, but not likely true in all his details.  We still have much to learn.

Who do you believe? Experts are not always right, but they have a good record and don't like to guess.  Check:  http://www.therealjohndavidson.com/2022/07/expertise-too-often-shunted-aside.html