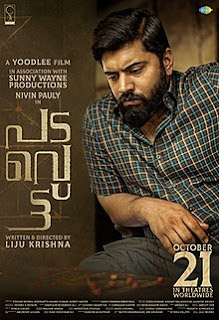 "Padavettu" (2022) was an unexpected opportunity for me.  Only recently became aware of it on Netflix and wasn't sure what to expect.  It carries on a high level tradition of Malayalam language films.

The story is set in a village that seems to follow the lead of a politician who has the idea of developing business.  We follow a man who is strong and a very capable fighter, but has low self esteem.  He tries to develop a relationship with a woman who likes him, but is put off by his unwillingness to rock the boat.  Of course eventually he finds the strength and courage to tackle the politician on behalf of the farmers and this prompts a confrontation not only with the politician but with his followers.  How he resolves the situation is the climax of the film.  The whole process is well done.

Like many film projects this one was interrupted by the Covid pandemic and there was some concern it might not get finished.  A good cast and crew made this film stand out.

Liju Krishna with his first film feature credit was both writer and director.  A line that catches some of the theme of this film comes from Ravi, the lead, ""If we don't have a scheme of our own others will make us part of their schemes."  Liju made a short film that won awards and then wrote a play for the theatre.

Siddharth Anand Kumar was a producer.  Born in India, started acting in plays in theatre.  He went to Hampshire College in Massachusetts.  He got a break when with a film "Kamasutra" (1995) he had been hired for a very small role, but with a conflict for a better role he won.  Some of his of other film credits include "Kuchh Bheege Alfaaz" (2018), "Music Teacher" (2019), "Chaman Bahaar" (2020), and "Habaddi" (2022).  As Vice President of Yoodlee Films he is looking to develop films that shake people, start conversations and lead to positive change.

Deepak D. Menon was the cinematographer and Shafique Mohamed Ali the editor.

Nivin Pauly plays the lead.  He goes from a moody, depressed person to a person of confidence to take on a bully politician.  His film credits include "Bangalore Days" (2014) and "Ohm Shanthi Oshaana" (2014).  "Bangalore Days" remains one of my favorites, http://www.therealjohndavidson.com/2021/03/bangalore-days.html

Ritika Badiani played Ravi's girlfriend, Shyma who had more faith in him than he did himself.  Her film credits include "Airlift" (2018) and "Chaman Bahaar" (2020).  In college she played soccer.

Shammi Thilakan played the stern, calm politician.  Shammi has been in films since 1985 including "Janna Mana Gana"  (1922).  Check:  http://www.therealjohndavidson.com/2022/06/jana-gana-muna.html

Indrans played the father of Shyma and did not approve of Ravi.  Indrans was a tailor and got into films as a costume designer.  As mostly a supporting actor he has had over 400 roles.  Including "Aaloroukkam" (2018) and "Virus" (2019.  He also is the star of my favorite movie this year, "#Home" (2021),   Check http://www.therealjohndavidson.com/2022/05/home-comedic-clash-of-generations.html

Since I posted a blog about how I learned to love Malayalam films, they have continued to come up with really international class films  http://www.therealjohndavidson.com/2021/03/how-i-discovered-malayalam-cinema-and.html