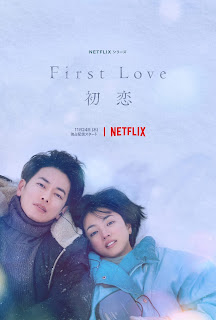 Already had decided on my 3 top favorite series of the year and then stumbled on this one.  Now I will simply have to add this one.   For more than one reason this is one of the best romances I have ever watched.  One of the promotion lines is that it is heart breaking and heart warming and most will feel both emotions.

The script is based partly on two songs written by singer Utada Hikaru popular across most of Asia and pushing further.  Her songs add to the allure of the series.

The format is a bit confusing at first, but in fact it seems genius.  We are given scenes from various time lines and then quickly revert to another time line that explained more fully what we had seen.  Different actors are used for the different time line roles.  The two main roles seem to have three of four different actors who change their hair styles with each time line. The chemistry between the two main pairs is very satisfying

Memory plays a key role.  Yae loses her memory at a key point and her mother tries to make her forget Harumichi, her boyfriend and succeeds.  When by one of those amazing coincidences they meet up years later she does not recognize him, but over time as fate seems to increase their encounters she develops very strong feelings for him.  He, on the other hand feels ambivalent worrying about upsetting her with forgotten memories.

There is a big element of class discrimination.  Yae's mother wants only the best for her daughter including marriage prospects.  Our Harumichi is too low class and she cuts him out of her daughter's life.  On the other hand Yae's mother in law criticized her mother so severely that it led to a divorce and soon she loses custody of her son.

There are many intervening years and their circumstances have complicated their future.  She gets married, divorced and with a child.  She had a job and got laid off eventually becoming a taxi driver.  Her son, Tsuzuru, 14 years old developed an obsession with a sort of street dancer, Uta and that becomes a link between the two first loves.

Harumichi on the other hand decided to join the Japan Self Defense Force and become a pilot.  It takes him to Iraq and various disasters eventually injuring him.  From the injury he met Tsuemi during psychological assessment.  It is she that when asked about recovering memories brings up a literary allusion to Proust.  Eventually the two live together, but Harumichi is not quite content.

Covid disrupted a lot of lives.  Just when we thought the heroine was ready to seek out the hero she was grounded by the pandemic.

After Covid eases up a bit Uta came back from a world tour to reunite with Tsuzuru who now was an established pop composer.  It does have a happy ending, but perhaps not quite as you expected.

One niche of roles that troubles me are those who lost in romance.  Most of us have been in that category, more often than we like to recall, so we know it is realistic, but also unpleasant.  In this film each leading character attracted would be lovers that didn't measure up.  They were both decent people and I felt sad for both of them who offered sincere love.  Admittedly a bit sexist, but my father lamented to me that he disliked movies where there weren't enough women to go around.

Sign language was required for at least eight actors.  It would be easy to fool me, but it was a key element in the plot and was well handled.  Harumichi's sister Yu uses sign language and as a result Yae learns it to hopefully be part of the family.  A few other actors are required to use sign language.  The skill is an important element of the story.

You are warned about nudity and I can only recall two instances.  One is when two teenagers are looking at a sex magazine and view a foldout of a nude.  The other is more explicit involving the lead male with a hooker which lasts perhaps close to a minute.

One small detail I hope to follow up because it looks delicious.  A unifying link between pre memory loss and afterwards is a food item, Napolitan.  Asking what is a favorite food is considered encouraging to prospective lovers.  Later the same request triggers hope.

It took a professional cast and crew working well together.

The writer/director was Yuri Kanchiku attended the Nihon University College of Art.  Interested in lights and composition.  First film was "My Rainy Days" (2009) based on a mobile phone novel.  She is very meticulous about color preferring two hues of same color in a scene

Kasumi Yao was the producer.  They hired a producer group to part of an episode in Iceland headed by Leifur B. Dagfinnsson who had produced "The Northman" (2022).

Music was provided by Taisei Iwasaki who has 24 film credits.

Two editors are listed, Emi Onondera and Naoki Watanabe.  With the frequency of time shifts smooth editing is necessary to keep the story moving forward.

Also there are only two cinematographers listed; Junichi Nakamura and Kazuma Shinde.  Much of the action takes place in Sapporo and Hokkaido Island with gorgeous scenery and also in Iceland.

The lead role of Yae as an adult is played by Hikari Mitsushima.  Born in Okinawa with a French American grandmother.  She joined a girl band, Folders for 5 years as a dancer/singer.  An award winner she started films in 1997.  The role as a teenager was taken by Rikako Yagi who had been instructed to mimic hand motions of Hikari.  The two worked with each other.

The lead role of Harumichi Namiki as an adult was played by Takeru Satoh.  Takeru had been a child actor for commercials, but dropped out when he reached high school.  By 2006 he started films and has added over 50 film credits and the lead in a few series.  He also appeared as himself in a few documentaries.  Along with two co-stars in 2014 he was appointed a Cultural Friendship Ambassador to the Philippines. He has a black belt in Shorinji Kempo.  He worked with Taisei Kido who played the role as a teenager.

Chae's son Tsuzuru was played by Towa Araki who had started tv. series at about age 9.

Harumich's fiancee, Tsuemi was played by Kaho who started films in 2004 including "Our Little Sister" (2015).

It is also available in a dubbed version as well subtitled in several languages.

The Japanese film makers to some extend have been overshadowed by their South Korean competitors, but they had decided to concentrate on their much bigger domestic market.  Netflix among others have discovered there is a treasure trove of great films and more will be on their way.

Personal Note:  While binging on this series I was also reading, "The Confidence Man" about Donald Trump.  He not only is repulsive, but it upsets me that too many think of him as some sort of Messiah.   This series helped relieve the disgust reading the book.