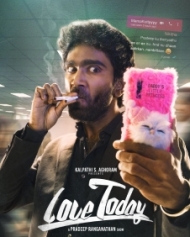 How smart are we?  Smart phones have opened up new portals of communication, but also retain many secrets.  As a youngster we told our friends lots of secrets and naughty things, but now we tell them to the world and have them on record, not just someone's word for it.  How many times have you said something you wish nobody heard?  How about things you made up?

In India arranged marriages are common while young adults are more determined for love partners.  In "Love today" (2022) one father trying to control his daughter Nitkitha's dating has cornered her most determined suitor, Pradeep and forces the two of them to swap their smart phones for 24 hours.  They each think they know everything about their lover, but this is a real test.  They also feel they can trust the other.

There are lots of ways to hide previous conversations, but determined efforts soon reveal lots of secrets.  Although the secrets are proclaimed to be explainable, jealousy is hard to avoid and both play hardball games to delve into what they hadn't expected.  She learned a dog Pradeep gave her had been given to him by an ex girlfriend

The father is cut off, but is suspicious and proposes more technological efforts so that more of their secrets can be uncovered

Pradeep's sister, Divya found her groom, Dr Yogi to be very considerate of her privacy, but she became distrustful and wanted to duplicate swap.  Again we find hidden secrets.

Many embarrassing secrets were hidden requiring clever explanations that didn't always add up. some honest misunderstandings occurred and many details forgotten.  False accounts had been set up.  Human nature encouraged to bury some things that might hurt someone else while at the same time seeming to avoid being honest.  Perhaps the most difficult thing was when a video was uncovered with Nikitha in a sexually compromising position.   Her father does not believe her denials, but this becomes the test of trust.  Romance comedies aren't supposed to have unhappy endings and clever writers want to make a social point.  How they resolve the very awkward situation brought by smart phones is for you to watch.

One of the lessons is that everyone has a past, but need to focus on the future.  Unfortunately too many of our fellow humans find it very difficult to overlook past mistakes or to forgive past misdeeds.  Modern technology too easily preserves things best forgotten.

It is a film that effectively makes a point about our current social mores.  A lot of effort and talent was used.  Here is a brief outline of those who contributed to its success.

Pradeep Raganathan played Pradeep, the smart alecky boyfriend, but was also the writer and director and even wrote some of the lyrics.   His previous film, "Comali" (2019) he also wrote and directed and had a small role.

Ivana, in only her third role played Nikitha, Pradeep's girl friend.  Comic for much of the time, but upset as learned her boy friend had been associated with secrets and naughty things.  Her father could be trying.

Raveen Ravi played Pradeep's sister who had been impressed by her fiance's concern for her privacy, but came to suspect the too was hiding secrets.

Yogi Babu plays the groom for sister Mandela who goes through a parallel swap.  Yogi was an assistant director, writer and actor  for a tv. series, "Lullu Sabha" (2004-2007).  A popular award winner his film credits include  "Chennai Express" (2013) "Comali" (2019), "Mersal" (2017), "Mandela" (2021) and "Doctor" (2021).  A popular actor he is kept busy in Tamil cinema mostly playing comic supporting roles and twice being the leading character.  http://www.therealjohndavidson.com/2021/04/mandela-tamil-satire-with-apt.html

I will admit it took awhile for me to have confidence in this film, but it did come through, Well worth the time to watch it.